Lowell Erdahl on Unlearning the Things That Used to be Obvious 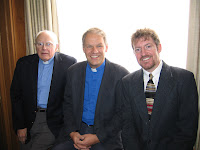 You may recall that last month I had the honor of standing with a number of local Christian religious leaders as together we spoke at the Minnesota Capitol in support of marriage equality.

One of these leaders was Lowell O. Erdahl, bishop emeritus of the Evangelical Lutheran Church in America’s St. Paul synod.

When I wrote about this event last month, I did not have a copy of Bishop Erdahl’s remarks. Since then, they’ve been posted on the website of Minnesota Public Radio. They are reprinted in their entirety below.

Unlearning the Things That Used to Be Obvious 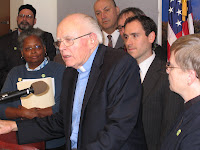 Five hundred years ago the great reformers Martin Luther and John Calvin were blinded by the obvious. They watched the sun and stars rise and set over what seemed a stationary earth. Furthermore, there were texts in the Bible that declared “The sun rises and the sun goes down and hurries to the place were it rises” (Ecclesiastes 1:4-5) and “The LORD ... has established the world; it shall not be moved” (Psalms 93:1).

Convinced by what was obvious in nature and clearly proclaimed in the Bible, Luther called Copernicus a fool. Calvin asked, “Who will venture to place the authority of Copernicus above that of the Holy Spirit?”

But they were wrong in their understanding of both the solar system and the Bible.

I, too, was blinded by the obvious. I observed that only men and women fell in love and got married. In high school I heard of some people who did same-sex stuff but I assumed that they were oversexed or goofing around. Furthermore, I learned that the Bible says that all such behavior is “an abomination” (Leviticus 18:22).

But I was wrong in my understanding of both homosexual humanity and the Bible.

I now thank God for gay and lesbian Christians who have been my teachers. They have introduced me to a significant segment of humanity who, through no choice of their own, are attracted to, fall in love with and desire to live in lifelong partnership with persons of the same sex.

I’m also grateful for scholars such as Martti Nissinen, author of Homoeroticism in the Biblical World, who have taught me that those condemning texts relate to lustful, exploitive same-sex activity, such as temple prostitution, abuse of prisoners and pederasty, but say nothing about homosexuality as we understand it today. Nor do they say anything concerning people in lifelong, life-giving, committed relationships. For them we turn to other texts, such as Romans 13:8-10, which says:

Owe no one anything, except to love one another; for the one who loves another has fulfilled the law. The commandments, ‘You shall not commit adultery, You shall not murder, You shall not steal, You shall not covet,’ and any other commandment, are summed up in this word, ‘Love your neighbor as yourself.’ Love does no wrong to a neighbor; therefore, love is the fulfilling of the law.

I regret my previous blindness and the harm I have caused. I’m grateful that the ELCA has opened the door to the blessing of committed same-sex relationships and to the ministry of people in such relationships. I continue to pray and work for their full inclusion in church and society, including their right to civil marriage.

It will be a great day when homosexual humanity is as clearly understood and as fully affirmed as Copernican astronomy is today.


See also the previous Wild Reed posts:
A Catholic Voice for Marriage Equality at the State Capitol
The Standard for Sexual Ethics
Relationship: The Crucial Factor in Sexual Morality
Donald Hanway’s “Fresh Look at a Sensitive Topic”
Making Love, Giving Life
The Many Manifestations of God’s Loving Embrace
The Non-Negotiables of Human Sex

Thank you for sharing that. I am waiting for some of our Catholic bishops to show similar courage. When will our gay bishops start supporting the dignity and humanity of their brothers and sisters? Are there any brave enough to stand up against the hatred and fear? I suppose some have in the past (Always Our Children) but their voices need to be heard now.

Let me say as a therapist, this is very good news. It is also timely, as I have a post up on exactly this:

Interestingly, I also posted it on my blog at a political site, but there it seems to have sparked more of discussion related to how religion can harm anyone!

I have updated my post at TPM to reflect this moving news you've reported:

So it's possible you may get some extra traffic as a result.

When will the USCCB come to this point of realization...? :(