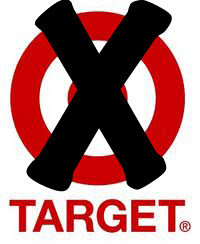 Ryan Murphy, son of my friends Mary Lynn and Mike Murphy, has an excellent letter-to-the-editor in the August 13 issue of Lavender magazine. If you’re in any way confused or unsure about the recent call by many to boycott the Target corporation, Ryan’s letter will, I’m sure, provide clarity and resolve.

I also have to say that his connection-making among issues of sexual orientation, gender, race, and immigration status reminds me of my activist days with

Queers United for Radical Action (QURA), a group I founded and was part of in the early 2000s.

Ryan’s letter is reprinted in its entirety below.

Time for a New Gay Agenda
When Target recently donated $150,000 to Minnesota Forward, a front for openly homophobic gubernatorial candidate Tom Emmer, it seemed that the GLBT community had been hoodwinked. Target, after all, is a model for corporate gay friendliness, a patron of Twin Cities Pride so enthusiastic that tens of thousands of visitors go home stamped with the company’s bulls-eye logo cut from a rainbow flag.

How, community members and activists are asking, could a company that has done so much to build a brand-loyal GLBT consumer and employee base fund a vitriolic opponent of gay rights?

The answer to this question should force us to think more critically about the connections between GLBT activism and issues of gender, immigration, and race.

Target, after all, made its donation not because of its position on gay rights, but because of its take on immigrant women’s labor. Minnesota Forward is a “pro-business” lobbying group dedicated not only to preventing employees from joining unions, but to blocking legislation that would mandate shorter hours, health insurance, vacation time, and retirement benefits for all employees.

The vast majority of people who work the registers and stock the shelves at Target are people of color, many of whom are women, and many of whom were born not in the Twin Cities, but in Somalia, Ethiopia, Nigeria, Mexico, El Salvador, Laos, or many other countries poorer than the United States.

The challenges that these people’s gender, race, immigration status, and income level provide on the job market make it harder for them to demand higher wages and better benefits. To keep its cost low, Target is invested in keeping these barriers in immigrant women’s lives. Hence, the $150,000 for Emmer.

But what, people might ask, does this have to do with the GLBT community?

The answer lies in whom companies have traditionally honored with full citizenship at work. Companies have long offered good wages to male breadwinners, paying handsome salaries to the Ward Clevers of the world who had to take care of June, the kids, and the home behind that white picket fence.

Historic patterns of discrimination have made it much less likely that families of color, immigrant families, and GLBT families live behind those white picket fences. Thus, these groups have been afforded less at work.

Remember, a lot of companies still give family benefits to married straight people, but deny them to gays with partners or kids.

It is time to take this inequitable history – and Target’s latest chapter in it – to rethink the goals of GLBT activism. We must make a fundamental commitment to the belief that everyone deserves dignity on the job.

Without making this connection, and by continuing to tolerate companies that are “pro-gay” and “anti-labor,” we set ourselves up to be hoodwinked, and to be presented with a Governor like Emmer who will provide fairness and dignity to none of us.

there's another logic that may be problematic for ryan's piece, namely, that "anti-business, pro-labor" candidates like to use the heavy-hand of government rule and intervention to achieve their ends. and that, historically, is a much more dangerous path for gays and lesbians--namely, to rely upon government so much and to favor increased government power in the private sphere. remember--it's government that has the monopoly on the use of force and it's government that can give and take away if we let it. so i'd be careful about blindly supporting candidates that want to use the power of the state to interfere with the lives of people, even if you think the interference is a good thing. it sets the precedent for interference from the state when you don't like it, too.