CPCSM and the Archdiocese of St. Paul and Minneapolis (Part 3)

Last November I began documenting the relationship between the Archdiocese of St. Paul-Minneapolis and the organization I work for, the Catholic Pastoral Committee on Sexual Minorities (CPCSM). The sharing of historical documents highlighting this past relationship is important and topical as there are some within the local church who today would like to downplay or even deny that such a relationship ever existed.

In this third installment, I share an article that appeared in the December 4, 1998 issue of the National Catholic Reporter. This article documents the Archdiocese’s defense of CPCSM co-founder Bill Kummer (right), along with ministry work that CPCSM was doing at that time with the archdiocesan Catholic Education and Formation Ministries (CEFM) office, from accusations made by the ultra-right newspaper, The Wanderer. A similar article was published in the archdiocesan newspaper, The Catholic Spirit, and will be shared as the next installment in this series.

National Catholic Reporter
December 4, 1998
Efforts to make Catholic high schools places where gay, lesbian, and bisexual students are safe from harassment have been defended by the St. Paul-Minneapolis archdiocese. The initiatives taking place at Catholic high schools in the Twin Cities area are consistent with Catholic teachings and doctrine, a statement from the archdiocese said.

The November 10 statement came in response to criticism in The Wanderer, an ultra-right newspaper based in St. Paul. The newspaper said gay activist Bill Kummer of Minneapolis, who served as a resource for the archdiocesan Catholic Education and Formation Ministries office had “used” Archbishop Harry J. Flynn and other archdiocesan officials to promote a gay agenda. The Wanderer said that at the conference of the National Association of Catholic Diocesan Lesbian and Gay Ministries in Rochester, N.Y., Kummer boasted he had transformed nine of the 11 Catholic high schools in the archdiocese into “gay friendly” schools.

St. Paul’s archdiocesan officials said they listened to the same recording of Kummer’s remarks and came up with a different interpretation. “After a careful review of the tape by archdiocesan leaders, it is clear that Mr. Kummer said nothing that would give a reasonable person the idea that he had intended to deceive anyone regarding this matter,” the archdiocesan statement said.

Thomas McCarver, director of the Catholic Education and Formation Ministries office, equated the initiatives with issues of racial and gender bias and other strands of prejudice that are unacceptable according to Catholic church teaching. He said bias against gay and lesbian students “has been ignored, and that’s the reason for our schools taking these initiatives.”

Training offered to Catholic high school faculty and administrators teaches that gay, lesbian, and bisexual people deserve to be respected and treated with the dignity all God’s creatures have a right to expect.

The archbishop’s position is that we teach within church teaching, and we have,” McCarver said. He said faculty members have reported a change of climate in the schools as a result of the initiatives. “If it was OK to bash someone in the past, it isn’t now,” he said. “It’s about how we behave toward one another. We’re trying to teach kids what’s right.”

Sadly, archdiocesan support of CEFM and CPCSM’s “Safe Schools Initiative” did not last. Perhaps because of Flynn’s rebuttal of The Wanderer (the first time a bishop publicly rebuked the newspaper), reactionary elements within the local church of St. Paul-Minneapolis intensified their efforts to put an end to the initiative. They succeeded shortly after the publication of this article, when the archdiocese notified the schools that CPCSM representatives were no longer welcome to be part of CEFM’s work. The formal training of faculty and administrators effectively ceased as a result. 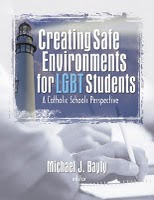 I was only ever minimally involved in the Safe Schools Initiative of the mid-late 1990s. I did, however, take on the task of compiling and editing the various resources, strategies, testimonials, and anecdotal components of the initiative and crafting them into what became the 2007 book, Creating Safe Environments for LGBT Students: A Catholic Schools Perspective. (For reviews of this book, see here, here, and here.)

Shortly after the book’s publication, Archbishop Angelo Amato of the Vatican's Congregation for the Doctrine of the Faith wrote to Flynn and informed him that the book was “not suitable to be used in Catholic schools.” Why? Because it “calls into question the teaching of the Church on homosexuality.”

Flynn made no secret of Amato’s letter (indeed, he had been instructed to share its contents with “those involved [locally] in Catholic education”). As a result, it wasn’t long before a copy found its way to me. I’m actually mentioned in this letter from the Congregation for the Doctrine of the Faith, ensuring that it’s now framed and given pride of place in my office. After all, as a friend reminded me: “If you’re pissing off the former Office of the Inquisition, you must be doing something right!” 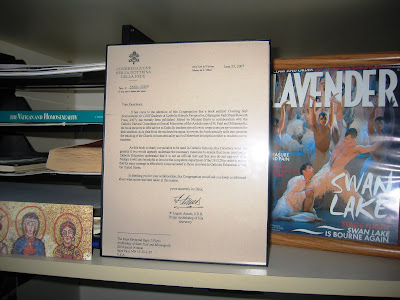 I still occasionally get invited to speak to classes in certain Twin Cities area Catholic high schools, where I share my experiences, questions, and insights about being both Catholic and gay, but it’s all very much “under the radar” – which says a lot about not only the climate of fear and intimidation within the church around this issue, but the need for independent, grassroots groups like CPCSM.


NEXT: Part 4 – More on the Archdiocese's Efforts to Defend the Addressing of Gay Issues in Catholic High Schools

“If you’re pissing off the former Office of the Inquisition, you must be doing something right!”

Amen to that! I love that you framed the letter. I'm a little envious now...

It was good that the Archdiocese supported this in the past. It is too bad that this has not continued. What is Archbishop Neinstedt's opinion on treating gay students with respect and ending bullying and negative stereotypes in schools? Does he think gay students should be allowed in Catholic schools? If only he could be convinced that gay people are not "disordered", defective or inferior.