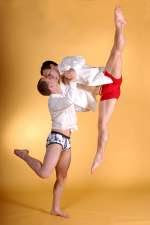 No, that's not a description of this blog but rather of another Fringe Festival show that Doug and I saw last night. Actually, we saw two shows! But it’s the first one we attended that I’d like to focus on in this post.

In keeping with my recent commitment to see more dance, this first show was comprised of two dance performances – CorresponDance and Thinkingaview. Together they comprise a split-bill dance show that, as the organizers of the Fringe Festival note, is both “whimsical and edgy” in its combining of “vibrant movement with thoughtful social commentary.” Both performances were filled with dances that explored and celebrated connection, love, intimacy, and different types of relationships. 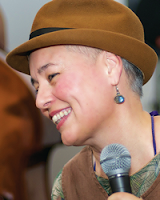 Along with the beauty of the dancers, audience members were treated to the beauty of vocalist Marty Winkler (right) – whose warm and lush performance of her own compositions as well as her renditions of classics from the likes of Etta James, added a whole new depth of meaning to the lithe and sensual movements of the dancers. CorresponDance, choreographed by Rebecca Katz Harwood (left) in collaboration with the dancers, is an exploration of “how we create and maintain relationships across distances – geographical, cultural, and emotional.” The Fringe Festival website notes that the piece was “created by a company spread from Duluth to Georgia, [and] has taken shape literally across distances, with rehearsals and ideas exchanged via YouTube and email, as well as in person. The ultimate goal of CorresponDance, like correspondence, is human connection.” 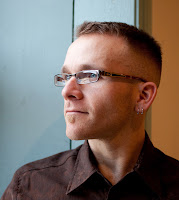 Thinkingaview, choreographed by Jeffrey Peterson (right), has been said to “disguise social scrutiny as lighthearted cabaret entertainment.” Festival organizers describe the piece as follows: “Through emotionally charged dancing, innuendo-laden partnering, gendered repetitions, public displays of affection, and strong costume choices, Thinkingaview boldly encourages us to love and perceive love without judgment. The goal of Thinkingaview is to raise a mirror to the members of its audience, asking us all to think about how we view our own and others’ relationships, no matter who/what they might be.”

I enjoyed both CorresponDance and Thinkingaview very much and highly recommend them. Both performances are up there with Casebolt and Smith’s O(h), highlighted previously at The Wild Reed. There are two more scheduled performances of CorresponDance/Thinkingaview – Friday, August 13 (10:00 p.m.) and Saturday, August 14 (8:30 p.m.). Both take place at the Southern Theater (1420 Washington Ave. S., Minneapolis).

I’ll conclude by sharing excerpts from The Daily Planet’s Matthew A. Everett’s 5-star review of the CorresponDance and Thinkingaview performances.

I don’t think I have words to adequately describe how much fun this was. Or how sexy it was.

When you combine a group of dancers as lithe and limber as Sarah Jabar, Patrick Jeffrey, Jordan Klitzke and Ashleigh Penrod, with choreography by Rebecca Katz Harwood, and the music of Marty Winkler (backed by Tate Ferguson on guitar, and Kate Bordeaux and sometimes Harwood as well on vocals), well, damn. That’s CorresponDance.

A friend in the audience commented afterward that for a while they weren’t sure if it was a dance piece accompanied by amazing music, or a live concert that included dance. And I almost think it doesn’t matter. The music was so languid and lush, and the dancers’ bodies and moves so breathtaking, it all sort of assaulted your senses and seduced you from whatever angle you were willing to meet it. The yearning for connection was both aural and visual, the one constantly reinforcing the other until you almost couldn’t bear it (in a good way).

. . . If the first half of the show is about striving for connection, then the second half is all about getting it – and release. Phew.

Thinkingaview was the portion of the show I’d seen in a previous incarnation at the Bryant Lake Bowl, so I knew it was going to be good. But I’d forgotten just how joyful it was. The dancers from CorresponDance were joined by Megan Bridges, Bryan Gerber and Susanne Grochett, for choreography by Jeffrey Peterson. The live musical treats continued, taking a lot of old Etta James standards and giving them the Marty Winkler treatment (along with Ferguson, Bordeaux and Harwood again, with the occasional dancer picking up an instrument and playing along).


See also the previous Wild Reed posts:
Oh! What’s This, Then?
The Dancer and the Dance
Recovering the Queer Artistic Heritage
Love, Equality and the Rumba
Oh, Yeah!

If you hadn't already planned on seeing it, check out Fishbowl. I think you'll like it!