Dave Navarro to LGBT Youth: "We Need Your Voice" 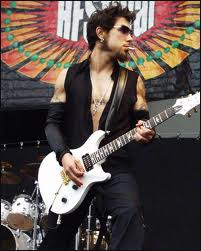 Alternative rock guitarist Dave Navarro has released a powerful open letter in which he addresses gay, lesbian, bisexual, and transgender teens. The letter was first published on PerezHilton.com and has since been reprinted on numerous websites, including TruthWinsOut.org.

I'm sure Navarro chose to write and release this letter in response to the alarming number of suicides by teenagers who, because they identified as gay or were perceived to be gay, had been bullied relentlessly by their peers. 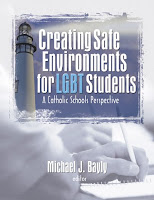 I first became aware of the high rate of suicide among gay teens when researching and writing Creating Safe Environments for LGBT Students: A Catholic Schools Perspective in the early-mid 2000s. The book was published in 2007, the first text of its kind to focus on the Catholic high school context. It was promptly denounced by the Vatican for "questioning church teaching" on homosexuality."

Here's an excerpt from that part of Creating Safe Environments for LGBT Students: A Catholic Schools Perspective that examines "High-Risk Factors for LGBT Youth."

Writing for In These Times magazine in July 2001, Anthony Chase notes that "gay males account for more than half of male youth suicide," and identifies "a pivotal 1978 study by Alan P. Bell and Martin Weinberg of Indiana University [which] first indicated a suicide rate among homosexual males 14 times higher than that f their heterosexual peers." Study after study, notes Chase, "reconfirms this result."

The Seattle Schools' 1995 Youth Risk Behavior Survey, for instance, aimed to examine the "homosexuality factor in the suicidality statistical results." Some of its findings included the following:

The situation has not improved in the years since the above statistics were compiled. Indeed, in today's Star Tribune it's reported that "a new nationwide survey shows that gay, lesbian, bisexual and transgender students and staff face relatively high rates of harassment on college and university campuses. They were twice as likely to be targets of derogatory remarks than their straight counterparts, according to the 2010 State of Higher Education for Lesbian, Gay, Bisexual and Transgender People, released this month. About 13 percent of GLBT respondents said they feared for their physical safety."

This past Monday, I attended a press conference in Coon Rapids, MN, that focused on the Anoka-Hennepin School Board's refusal to implement anti-bullying education programs aimed specifically at anti-gay bullying. The school district has seen five teen suicides in the past year.

I intend writing more about the press conference I attended and the situation in Anoka County shortly. For now, I share Dave Navarro open letter to LGBT youth. 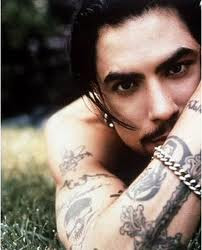 OK everybody, here is the deal. I cannot imagine what it’s like growing up in a close minded environment and being gay, bi or transgender. I don’t think any of us who aren’t can possibly imagine. The strength and character it must take to stay true to yourself in such an unforgiving microcosm are qualities that a major portion of the world lacks. Sad, but true. It’s just how it is at the moment.

However, it’s that very strength and character that gives the world hope for a new way of thinking and acceptance in the future and when one of our children gives in and gives up, it is not only a tragedy but a victory for those who fear diversity. DO NOT LET THEM WIN! I know how overwhelming the feelings can get and how small the reality can feel, but the bottom line is that this is but a drop in the bucket in terms of the magnitude of life. You can get through this. High school is full of plenty of bullies and fear based hate, as is the world. With any group of people comes a percentage of people who just don’t get it and probably will never get it. That’s OK. We all deal with this to an extent. The truth is that in high school, you are kind of stuck in the group you are a part of until graduation, but trust me . . . You can pick and choose who you associate with and there are plenty of like-minded people in the world that are understanding, accepting and loving. Sometimes, we just have to stick it out to meet them.

The hard cold reality is that once you have chosen suicide, that’s it. No going back. Sure, there is a public outcry and MAYBE the bullies feel remorse for a while, but it all dies down, life goes on, the bullies let the memory fade and get on with their lives. They learn to laugh, love, reach their goals and in many cases go on to have a full and productive life. Who loses? You do! Your family! Your friends! Other teens who need support in this area! Oh yeah . . . We all Lose! Now the world has one less mind that is open and different and unique and sensitive. Instead, we inherit the bullies, the fear, the set back. Our world has one less soul to help it evolve with a new level of clarity.

Personally, I have seen a lot of darkness and tragedy that has felt insurmountable. The murder of my mother, my battle with drug addiction, the loss of friends and family. Utter depression and despair. Of course the thought of suicide has crossed my mind a time or two. Let me share this. THANK GOD I never took that action. The friends I have made, the experiences I have had, the laughter I have shared would have all been missed. In hindsight, some of my darkest moments now seem so small and insignificant that I am amazed I gave them so much power at the time. I am even able to laugh about it now. When I think back to the times I have considered ending it all I end up saying to myself, “What was I thinking?”

To those of you contemplating such a course, please do us a favor: Seek counseling first. Find a network of people who have gone through what you are going through. Help others in even more turmoil than you. I am certain that you can find peace. As you know, our society and political climate is SO divided right now. We need your voice. The world at large needs your sheer existence in order to come to terms with itself and where we are going as a planet and species.

For reviews of Creating Safe Environments for LGBT Students: A Catholic Schools Perspective, see the previous Wild Reed posts:
"A Courageous Document"
"A Valiant Effort"
"A Useful and Comprehensive Manual"

See also the related Wild Reed posts:
Confronting Classroom Homophobia
Homophobia? It's So Gay
A Girl Named Sara: A "Person of the Resurrection"
The Triumph of Love: An Easter Reflection

In a post that makes many important points, this one struck home for me:

"We all Lose! Now the world has one less mind that is open and different and unique and sensitive. Instead, we inherit the bullies, the fear, the set back. Our world has one less soul to help it evolve with a new level of clarity."