Another First for Black Panther 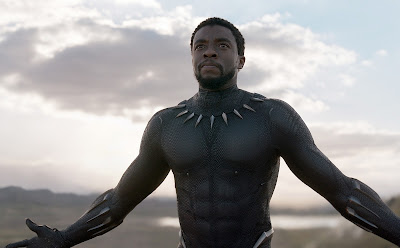 When it was released earlier this year, Black Panther was the first film of the Marvel cinematic universe to place a black superhero front and centre. It's also one of only a very few films to feature a black director (Ryan Coogler) and a majority black cast (including Chadwick Boseman, Michael B Jordan, Angela Bassett, Daniel Kaluuya, Lupita Nyong’o, Danai Gurira, and Forest Whitaker). In addition, it explores questions and issues about race and identity to a depth never before attempted by a film in the "superhero" genre.

Film critic Kenneth Turan sums it up well: “A superhero movie whose characters have integrity and dramatic heft, laced with socially conscious commentary as well as wicked laughs, Black Panther is the model of what an involving popular entertainment ought to be but hardly ever is.”

For all of these reasons and more, I don't think it's not an exaggeration to say that Black Panther represents an important cultural moment.

It's a moment that continues with the news that Black Panther has garnered yet another accolade: the first superhero movie to be nominated for best picture in the drama category at the Golden Globes.

Following is how Cole Delbyck of The Huffington Post, reports this news. 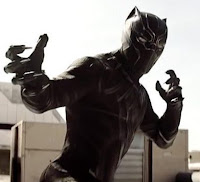 The Ryan Coogler-directed film has become the first superhero movie to be nominated for best picture in the drama category at the Golden Globes. A slew of stars, including the film’s own Danai Gurira, announced on Thursday [12/6/18] the nominations for the 76th annual ceremony to be held in January in Beverly Hills, California.

The film, which became the highest-grossing solo superhero film to date, earning $1.3 billion worldwide, was also nominated for best original song for Kendrick Lamar’s “All The Stars” featuring SZA, and best original score for Ludwig Göransson’s work on the film.

. . . The cast of the Marvel movie recently awarded the first recipient of The Black Panther Scholarship, which funds a full grant to Loyola Marymount University worth $250,000.

“We know that if we want to live in a world that looks more like Wakanda, the first step is you invest in women and girls,” Gurira said at The Hollywood Reporter’s 2018 Women in Entertainment event. 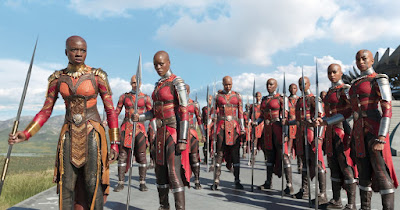 Above: Danai Gurira (left) as Okoye, head of the Dora Milaje, the all-female special forces of Wakanda, which serve as bodyguards to the king of Wakanda. 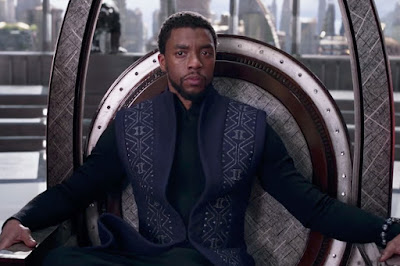 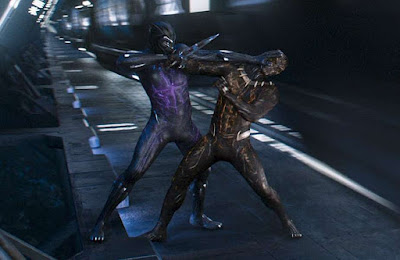 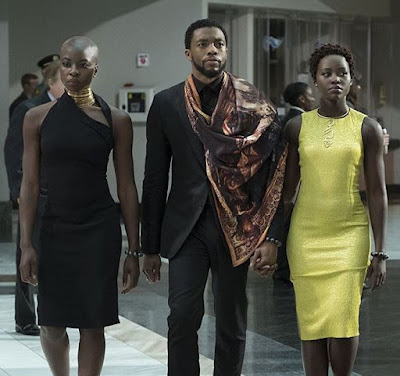 Above: Arriving at the United Nations, King T'Challa of Wakanda (Chadwick Boseman) is flanked by two of his most trusted friends and allies, Okoye (Danai Gurira, left) and Nakia (Lupita Nyong'o). 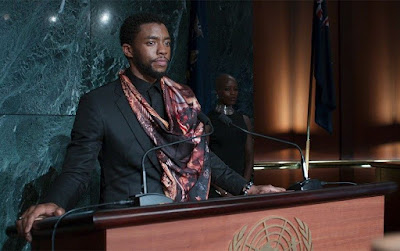 If you've seen Black Panther then you're probably aware of the first of three mid-credits scenes in which King T'Challa addresses the United Nations. Then again, you may have left the theater before this rather crucial scene! If so, then you definitely need to read what's next. . . .

In his interview with director Ryan Coogler about this particular scene, John Boone of ET notes the following.

The ending of Black Panther marks a new beginning, as T'Challa (played by Chadwick Boseman) chooses to reveal Wakanda's true identity as a technologically advanced, Afrofuturistic country and establish outposts around the world, starting in Oakland. The two end-credits scenes tease what the future holds for Wakanda and the Marvel Cinematic Universe at large.

[In the first mid-credits scene] King T'Challa arrives in Vienna, Austria, alongside Okoye (Danai Gurira) and Nakia (Lupita Nyong'o) to formally announce to the United Nations that, "For the first time in our history, we will be sharing knowledge and resources with the rest of the world."

Until this point, the rest of the world knew Wakanda as a third world country, prompting the question, "With all due respect, what do farmers have to offer the rest of the world?" T'Challa and CIA operative Everett Ross (Martin Freeman), who is watching from the crowd, lock eyes and share a knowing smile.

"When people say, 'This film is a political movie,' well, yeah. Black Panther is a politician," director Ryan Coogler explained to ET. "It's the first MCU film about a politician, so it should be the most political one. And if this character has to make a governmental address, what kind of stuff would he say?"

In T'Challa's speech, he speaks about that fact that there is more that connects us all than separates us. "The foolish build barriers," he asserts, "while the wise build bridges." Considering how culturally and politically relevant the entire movie is to this moment, this stinger feels like it is sending a message to the people in the audience – and maybe even someone in the White House. 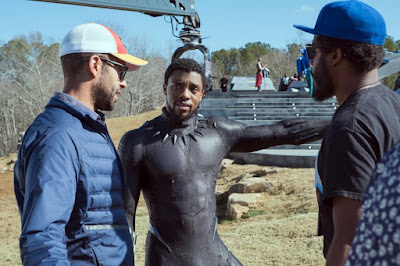 Above: Chadwick Boseman on the set of Black Panther with executive producer Nate Moore (left) and director Ryan Coogler. 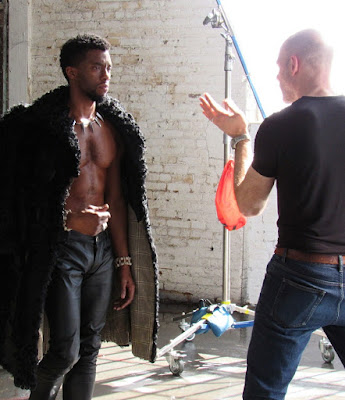 Above and below: Chadwick Boseman (left) on the set of a photo shoot to promote Black Panther. 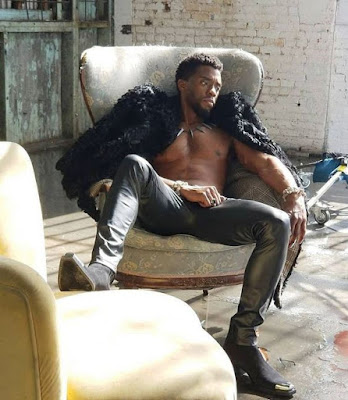