Maebe A. Girl: A “Decidedly Progressive Candidate” for Congress 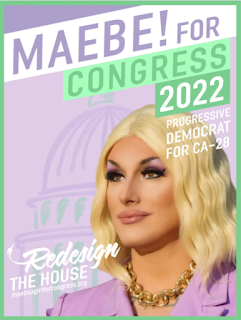 I continue The Wild Reed’s 2021 Queer Appreciation series by spotlighting Maebe A. Girl, the first drag queen ever elected to public office in the United States when, in 2019, she was elected treasurer for the Silver Lake Neighborhood Council in Los Angeles.

Girl, who identifies as non-binary and uses she/her and they/them pronouns, hopes to also become the first drag queen and first trans person elected to the U.S. Congress. She is running in the 2022 midterms as a Democratic primary challenger to Rep. Adam Schiff, who represents California’s 28th congressional district, which covers parts of Los Angeles County, including West Hollywood and Burbank. Girl describes herself politically as a progressive, while she labels Schiff a “corporate Democrat.”

This isn’t the first time Girl has ran for Congress. In the 2020 Primary Election, she challnged Schiff and received over 22,000 votes, missing advancing to the General Election by only 1,114 votes, or less than 1%. Republican Eric Early, instead, took the second position and lost to Schiff in the November 2020 election.

Maebe A. Girl is the decidedly progressive candidate for California’s 28th Congressional District, and is dedicated to working on behalf of its entire population – especially our most vulnerable, disenfranchised, and underrepresented neighbors. She is a proud member of Democratic Socialists of America – Los Angeles and believes we need to get big money out of politics and put people over profits.

On April 14 of this year, Maebe A. Girl was featured as part of Marianne Williamson’s Endorsee Candidate Summit, where she outlined her decidely progressive platform.

NEXT: The Art of Tania Rivilis

See also the previous Wild Reed posts:
• Trans 101
• Catholics Recognize and Celebrate the Truth of Transgender People: “Their Quest for Authenticity Is a Quest for Holiness”
• Quote of the Day – August 25, 2015
• Standing with Jennicet Gutiérrez, “the Mother of Our Newest Stonewall Movement”
• Signs and Wonders Continue
• Lisa Leff on Five Things to Know About Transgender People
• Shannon Kearns’ Transgender Day of Remembrance Message: “We Are Beloved Children of the Universe”
• Putting a Human Face on the “T” of “GLBT”
• Living Lives of Principle