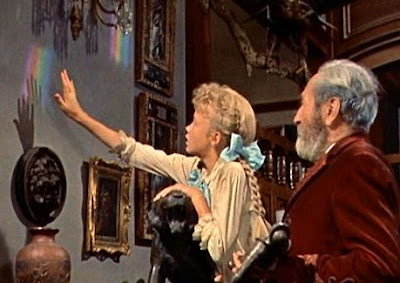 As much as I can, I seek to be a positive and pro-active person. I remember on at least one occasion, how my embodying of such qualities prompted a friend to label me a “Pollyanna,” a reference to the title character in Eleanor H. Porter’s 1913 novel, long considered a classic in children’s literature. You may remember that in 1960, Disney Studios made a film of the novel that starred child actress Hayley Mills, who won a special Oscar for her portrayal of Pollyanna. The film also featured Jane Wyman, Karl Malden, Agnes Moorhead and Adolphe Menjoun (pictured with Mills above).

Over the years, the term Pollyanna has been used to describe someone who has an unfailingly optimistic outlook. Yet it’s also often used disparagingly to describe a person who is considered naive and/or excessively cheerful. I’m pretty sure it was this later, negative use of the word that my friend had in mind when he dismissed me as a “Pollyanna.”

Perhaps you’ve had this experience too. If so, take heart! For as spiritual author, activist, and former Democratic presidential candidate Marianne Williamson points out, being a Pollyanna is actually akin to being a “miracle-worker,” and thus something to aspire to. Following is what she writes about this in her book A Return to Love: Reflections on the Principles of A Course in Miracles 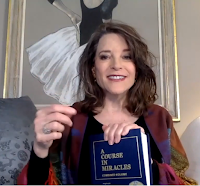 A Course in Miracles prides itself on being a practical Course with a practical goal: the attainment of inner peace. Forgiveness is the key to inner peace because it is the mental technique by which our thoughts are transformed from fear to love. Our perceptions of other people often become a battleground between the ego’s desire to judge and the Holy Spirit’s desire to accept people as they are. The ego is the great fault-finder. It seeks out faults in ourselves and others. The Holy Spirit seeks out our innocence. He sees all of us as we really are, and since we are the perfect creations of God, He loves what He sees. The places in our personality where we tend to deviate from love are not our faults, but our wounds. God doesn’t want to punish us, but to heal us. And that is how He wishes us to view the wounds in other people.

Forgiveness is “selective remembering” – a conscious decision to focus on love and let the rest go. But the ego is relentless – it is “capable of suspiciousness at best and viciousness at worst.” It presents the most subtle and insidious arguments for casting other people out of our hearts. . . . The miracle worker consciously invites the Holy Spirit to enter into every relationship and deliver us from temptation to judge and find fault. We ask Him to save us from our tendency to condemn. We ask Him to reveal to us the innocence within others, that we might see it within ourselves.

. . . A prime example of a miracle worker is Pollyanna. The ego knows this, which is why she is constantly invalidated in this culture. She walked into a situation where everyone had been in a nasty mood for years. She chose not to see the nastiness. She had faith in what lay beyond it. She extended her perception beyond what her physical senses revealed to her, to what her heart knew to be true about every human being. It didn’t matter how anyone behaved. Pollyanna had faith in the love she knew existed behind anyone’s fear, and thus she invoked their love into expression. She exercised the power of forgiveness. Within a short time, everyone was nice and everyone was happy! Whenever someone says to me, “Marianne, you’re being a Pollyanna,” I think to myself, “If only I were that powerful.”

– Marianne Williamson
Excerpted from A Return to Love:
Reflections on the Principles of A Course in Miracles
HarperPerennial
pp. 93-98

NOTE: A Course in Miracles by Helen Schucman has often been described as a religion or pseudo-religion. Marianne Williamson disagrees, telling Bill Maher in August 2019:

A Course in Miracles [is] a self-study program in spiritual psychotherapy. It is a book that is based on universal spiritual themes. It is not a religion. It does not claim any kind of monopoly on truth. It has no dogma. It has no doctrine. It talks about love and forgiveness. . . . [P]eople who are students of A Course in Miracles come from all religions and even no religion.

See also the previous Wild Reed posts:
• “Two of the Most Dedicated and Enlightened Heroes of Present Day America”
• Deep Gratitude
• “A Beautiful Message, So Full of Greatness”
• Marianne Williamson: “Anything That Will Help People Thrive, I’m Interested In”
• In the Garden of Spirituality – Marianne Williamson