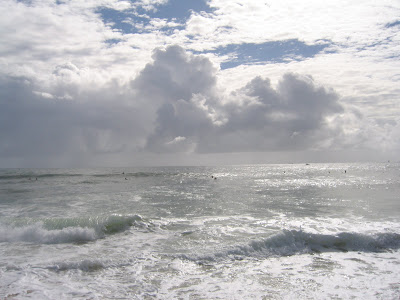 As soon as [Monsieur le Curé Truphème] had celebrated the divine sacrifice he had the carpenter called and asked him why he had taken the Christ down from His cross. But the carpenter replied that he had not touched it. Then, after having questioned the beadle and the sidesmen, Monsieur Truphème made certain that no one had entered the church since the crucifix had been placed over the churchwarden’s pew.

Thereupon he felt that these things were miraculous, and he mediated upon them discreetly. The following Sunday in his exhortation he spoke of them to his parishioners, and he called upon them to contribute by their gifts to the erection of a new cross more beautiful than the first and more worthy to bear the Redeemer of the world.

The poor fishers of Saint-Valéry gave as much money as they could and the widows brought their wedding rings. Wherefore Monsieur Truphème was able to go at once to Abbeville and to order a cross of ebony, highly polished and surmounted by a scroll with the inscription I.N.R.I in letters of gold. Two months later it was erected in the place of the former and the Christ was nailed to it between the lance and the sponge.

But Jesus left this cross as He had left the other; and as soon as night fell He went and stretched Himself upon the altar.

Monsieur le Curé, when he found Him there in the morning, fell on his knees and prayed for a long while. The fame of this miracle spread throughout the neighbourhood, and the ladies of Amiens made a collection for the Christ of Saint-Valéry. Monsieur Truphème received money and jewels from Paris, and the wife of the Minister of Marine, Madame Hyde de Neuville, sent him a heart of diamonds. Of all these treasures, in the space of two years, a goldsmith of La Rue St. Sulpice, fashioned a cross of gold and precious stones which was set up with great pomp in the church of Saint-Valéry on the second Sunday after Easter in the year of 18—. But He who had not refused the cross of sorrow, fled from this cross of gold and again stretched Himself upon the white linen of the altar.

For fear of offending Him, He was left there this time; and He had lain upon the altar for more than two years, when Pierre, son of Pierre Caillou, came to tell Monsieur le Curé Truphème that he had found the true cross of Our Lord on the beach.