How We Can Help the People of Haiti 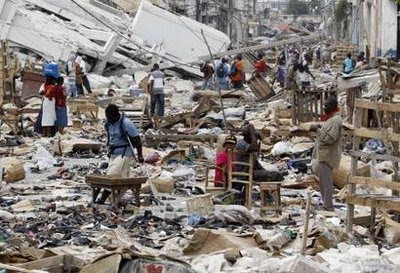 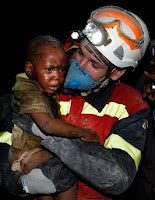 The news from earthquake-devastated Haiti is truly heartbreaking. I must admit it seems surreal watching the images of death and devastation on TV while enjoying the summer weather in Australia, surrounded by loved ones in a country that is, in so many ways, safe and secure.

If, like me, you want to offer financial help to the people of Haiti, along with prayers of strength, comfort, and healing, then I suggest you consider making a donation to one of the aid agencies listed below. Following this list is the latest Associated Press report on the situation in Haiti, and a prayer offered by Fr. Jean Jadotte, associate pastor of Notre Dame D’Haiti Parish in Miami. 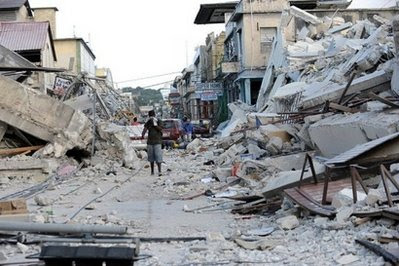 The international Red Cross estimated 45,000 to 50,000 people were killed in Tuesday’s cataclysmic earthquake, based on information from the Haitian Red Cross and government officials. Hard-pressed recovery teams resorted to using bulldozers to transport loads of dead.

Worries mounted, meanwhile, about food and water for the survivors. “People have been almost fighting for water,” aid worker Fevil Dubien said as he distributed water from a truck in a northern Port-au-Prince neighborhood.

From Virginia, from France, from China, a handful of rescue teams were able to get down to work, scouring the rubble for survivors. In one “small miracle,” searchers pulled a security guard alive from beneath the collapsed concrete floors of the U.N. peacekeeping headquarters, where many others were entombed.

But the silence of the dead otherwise was overwhelming in a city where uncounted bodies littered the streets in the 80-degree heat, and dust-caked arms and legs reached, frozen and lifeless, from the ruins. Outside the General Hospital morgue, hundreds of collected corpses blanketed the parking lot, as the grief-stricken searched among them for loved ones. Brazilian U.N. peacekeepers, key to city security, were trying to organize mass burials.

Patience already was wearing thin among the poorest who were waiting for aid, said David Wimhurst, spokesman for the U.N. peacekeeping mission.

“They want us to provide them with help, which is, of course, what we want to do,” he said. But they see U.N. vehicles patrolling the streets to maintain calm, and not delivering aid, and “they’re slowly getting more angry and impatient,” he said.

In Washington, President Barack Obama announced “one of the largest relief efforts in our recent history,” starting with $100 million in aid. The U.S. Southern Command reported the first 100 of a planned 900 paratroopers of the 82nd Airborne Division landed in Haiti from North Carolina on Thursday to support disaster relief, to be followed this weekend by more than 2,000 Marines. The American troops "will relieve pressure" on overworked U.N. elements, Wimhurst said.

From Europe, Asia and the Americas, other governments, the U.N. and private aid groups were sending planeloads of high-energy biscuits and other food, tons of water, tents, blankets, water-purification gear, heavy equipment for removing debris, helicopters and other transport, and teams of hundreds of search-and-rescue, medical and other specialists.

But two days after much of this ramshackle city was shattered, the global helping hand was slowed by the poor roads, airport and seaport of a wretchedly poor nation. 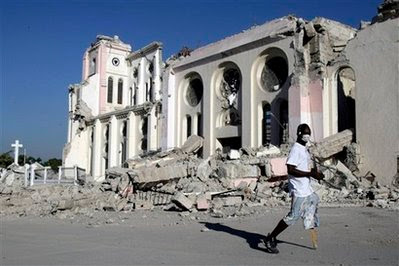 We are praying for hope despite this situation, that even as we face darkness, people may see a pinpoint of light.

-Pray for a greater conscience among everyone, not just in Haiti but all over, that we must do something [to help].

-Pray for a spirit of thanksgiving for international agencies for their good heart and good faith.

-Pray for relief workers to have a spirit of patience and perseverance.

-For those who at this time are in search of meaning in their lives and peace. 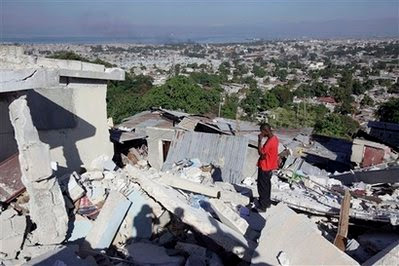 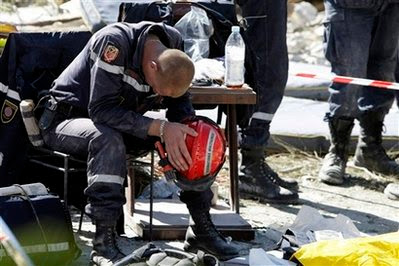 Image 2: A Spanish rescuer carries two-year-old Redjeson Hausteen after he was rescued from a home that collapsed during Tuesday’s earthquake in Port-au-Prince, Haiti, Thursday, January 14, 2010. (AP Photo/Gerald Herbert)

Image 3: A man covers his face as he walks amid the rubble of a destroyed building in Port-au-Prince. (AFP/Juan Barreto)

Image 6: A man, wearing a face mask as a precaution against infections, walks past the collapsed Cathedral of Port-au-Prince, Friday, January 15, 2010. (AP Photo/Francois Mori)

Image 7: Jurior Dorcely stands on the rubble of his collapsed home where his mother is still buried in Port-au-Prince, Friday, January 15, 2010. (AP Photo/Julie Jacobson)


See also the related Wild Reed posts:
Crisis in Sri Lanka
Letting Them Sit By Me