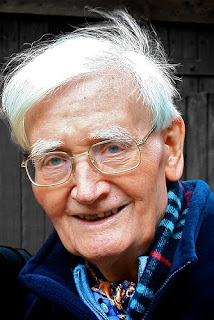 I thought the New York Times did quite well in describing the theological outlook and contributions to Catholicism of the late Edward Schillebeeckx (pictured at right). Of course, such contributions primarily emerged as the result of Schillebeeckx’s role as, in the words of the Times, “a leading adviser to the Dutch bishops, especially during the four sessions of the Second Vatican Council, a marathon reassessment of Catholic life held in Rome from 1962 to 1965.”

Following are further excerpts from the New York Times obituary for Schillebeeckx.

Like many Catholic theologians who influenced the council, Father Schillebeeckx had reacted against the neo-scholastic theology that the church adopted in the 19th century as a bulwark against hostile modern ideas. Distilled from the thought of Thomas Aquinas but frequently handed on without any examination of Aquinas’s writings or their medieval context, this neo-scholasticism articulated the faith in series of abstract concepts and propositions presented as absolute, ahistorical and immutable.

Father Schillebeeckx found alternative intellectual resources in modern phenomenology, with its meticulous attention to the actual experience of consciousness. And by studying Aquinas in his medieval context, he recovered a Thomism that expounded the presence and mystery of God in far less rationalistic and conceptual ways than did its neo-scholastic versions.

Strong emphases on human experience and on the importance of examining church teaching in historical context became hallmarks of Father Schillebeeckx’s work.

His early writing on the sacraments, for example, portrayed them as personal encounters with God rather than mechanisms for the distribution of grace. In two books — “Jesus: An Experiment in Christology” (1974) and “Christ: The Christian Experience in the Modern World” (1977) — he recast classical Catholic teachings about Christ around the experiences that gave rise to his followers’ faith in Jesus as messiah and the son of God.

These were groundbreaking attempts at rethinking church doctrine in light of the scholarly research about the historical Jesus that had accumulated in previous decades. But the fact that Father Schillebeeckx did not begin with Christianity’s great creedal statements about Jesus and the Trinity but instead focused on the subjective experience of the first generations of believers, as expressed in the New Testament accounts, stirred considerable controversy and a Vatican investigation.

Critics asked, for example, whether Father Schillebeeckx, by treating the resurrection largely in terms of the “conversion” experiences that Jesus’ disciples underwent after his death, was either denying that Jesus actually rose from the dead or suggesting that it did not matter.
Father Schillebeeckx said he was doing neither. His intention, he said, was to help contemporary people on a journey to belief by portraying the parallel journeys of Jesus’ first followers.

. . . An emphasis on experience led Father Schillebeeckx to much reflection on large-scale human suffering and on salvation as liberation from it. For him, faith in Jesus required not just a mental assent but also a this-worldly response to suffering.

. . . From 1968 to 1981, the Vatican began three investigations of his writings for heresy. They all ended inconclusively with admonitions, complaints and requests for clarification but with no formal censures or penalties.

To read the New York Times obituary in its entirety, click here.