A Socialist Perspective on the "Democratic Debacle" in Massachusetts 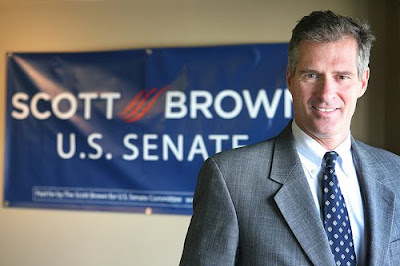 I appreciate Barry Grey’s perspective on the recent Republican victory in Massachusetts that saw the election of Scott Brown to the U.S. Senate. It’s a perspective that Grey shares in a commentary on the World Socialist Website. Following are excerpts.


There was nothing surprising about the [Massachusetts] election outcome. It was the result of the popular realization that the American people were conned into voting Obama into the White House.

Obama’s repudiation of his campaign promises and his single-minded pursuit of right-wing policies has been even more cynical than that of his Democratic predecessor, Bill Clinton. The Democrats believed that having elected a young African-American, they could use the new president’s persona to continue the policies of war and social reaction of the Bush administration.

Historically, US administrations that came to power on reform platforms and set out to expand their popular base by implementing social improvements won second terms by increased margins. Franklin D. Roosevelt won reelection in 1936 by a bigger margin than he obtained in 1932.

What did Obama and the Democrats have to offer Massachusetts voters? As is well known, Obama began his term by staffing his administration with Wall Street cronies of Clinton Treasury Secretary and former Goldman Sachs executive Robert Rubin. He sought to rehabilitate the discredited Republican Party, and reappointed Bush’s defense secretary, Robert Gates, to signal a continuation of the wars in Iraq and Afghanistan.

He proceeded to vastly expand the taxpayer bailout of the banks, block legislation to tax bankers’ bonuses, impose wage cuts and mass layoffs on auto workers, escalate the war in Afghanistan and extend it into Pakistan. He defended the torturers and war criminals of the Bush administration and continued renditions, military tribunals, indefinite detention, domestic spying and the rest of the police-state measures of his predecessor.

Obama has done nothing to provide jobs or relief for millions of people who have lost their homes and their life savings. He has demonstrated callous indifference to the mounting distress of working people while deferring to every demand of Wall Street. 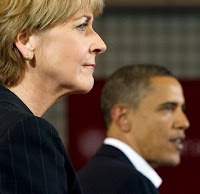 Massachusetts voters had no reason to turn out and vote for the Democrats. And they didn’t, in droves. Republican Scott Brown defeated Democrat Martha Coakley [pictured at left with President Obama] because the Democratic vote collapsed, and it fell most sharply in those parts of the state worst hit by unemployment.

Voter turnout plummeted among workers and youth, including African-Americans in Boston and in other cities.

As inevitable within the framework of a political system monopolized by two right-wing parties of big business, the opposition Republicans were the immediate beneficiaries. They had early on taken the measure of the new administration. They knew Obama was incapable of mobilizing a popular base of support, and they calculated that they could profit from the alienation of Democratic voters and the growth of popular disillusionment and anger.

The policies of Obama and the Democrats enabled the Republicans and the extreme right to pose as defenders of the common people. Brown [pictured at right] made his campaign a referendum on Obama’s health care plan. He pledged that if elected, becoming the 41st Republican in the Senate, he would supply the vote needed to successfully filibuster the Democratic bill and block its passage.

He tapped into a deep well of opposition to Obama’s health care scheme among workers, middle-class people and the elderly, who know that it means more cuts in benefits and higher out-of-pocket costs. Millions are already experiencing the drive to cut corporate and government costs in the guise of reforming the health care system. They are being denied access to tests and procedures by their health insurers.

Massachusetts voters also took the measure of Obama. They called him on his “change you can believe in” rhetoric, and said they didn’t believe a word of it.

The response of Obama and the Democrats to their debacle in Massachusetts is to lurch further to the right. They are using the loss of their “filibuster-proof” 60-seat super-majority in the Senate to justify a reworking of the health plan to make it even more lucrative for the insurance and health industries.

The filibuster issue is yet another political fraud. If the Democrats were proposing progressive and popular reform measures, any attempt by the Republicans to block them by invoking this anti-democratic parliamentary maneuver would be political suicide.

In practice, the Democrats never use the filibuster to stop right-wing legislation, while the Republicans manage to get their way with the barest of majorities. In 2000, having stolen the election, George Bush invoked a parliamentary gimmick to ban a filibuster and pass, with significant Democratic support, his multi-trillion-dollar tax cut for the rich.

. . . The Massachusetts election is indicative of a huge political crisis, not just of the Democrats, but of both parties and the political system as a whole. Underlying this crisis is the emergence of a new period of social protest and class struggle. . . .

To read Barry Grey’s commentary in its entirety, click here.