Where the Poseurs Are 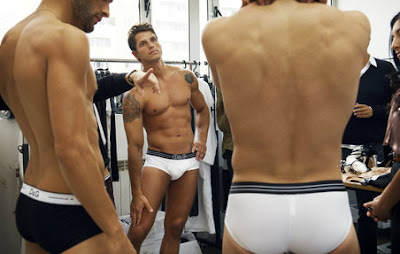 When it comes to clothes, I’ve never been what you’d call a “dedicated follower of fashion.” I’ve also never had much time for those magazines (gay or straight) that focus on vacant-looking models flogging off overpriced clothes that have been mass-produced in some Third World sweatshop. And as for coughing up $20 to $30 bucks for underwear – or rather for a brand name on underwear – well, forget it.

Given such views it’s not surprising that I found myself having a good chuckle at columnist Tim Dick’s perspective on fashion in the January 9-10 edition of the Sydney Morning Herald. Dick shares his thoughts on fashion as part of his attempt to not only challenge the “falsehood” that Sydney is the most pretentious Australian city, but to make the case for Melbourne as the true home of the Australian male poseur.

Following is an excerpt. Enjoy!

. . . Fashion is pretentious. It’s made worse by people who make super-human efforts to look fashionably, effortlessly non-conformist. Unique. They make themselves appear non-chalant about their looks when they are, quite obviously, not.

Fashion is what makes those parading about Bondi, Paddington and Surry Hills so repellent to the vast sensible majority who live in the rest of Sydney, the people who will agree with the view of one of the Western world’s few true non-conformists, the unfortunately dead Quentin Crisp: “fashion is what you adopt when you don’t know who you are.”

Yes, Sydney has plenty of male hipster posers, but Melbourne’s are more intense and more accepted. And if it is to be the Australian capital of chic, Melbourne must accept being the accompanying flip side, the capital of pretentious shallowness.

Sydney men have better things to do – like enjoying ourselves – than spend an hour of our lives we’ll never get back having some dim shop assistant in skinny black jeans and oversized singlet ignore you while you search for a pair of pants in your size, preferably without bedazzling.

Sydney cops grief for being shallow because as a city we’re obsessed with fit bodies, beaches and sex. Why any of those things should be grounds for getting grief at all is beyond me. Each is far healthier than obsessing about what clothes to wear, and more honest.

To read Tim Dick’s commentary, “Sydney Men Sigh with Relief: The True Home of the Poseur is Melbourne,” click here.

At this time one year ago at The Wild Reed:
Competent Parenting Doesn't Require “Traditional Marriage”
The Painted Forest
More on “Spiritual Paternity”
Bishop Spong: “Homosexuality is Not Unnatural”
A Declaration for Reform and Renewal

At this time two years ago at The Wild Reed:
Heath Ledger, 1979-2008
“Conversion Therapy” and the Pseudo-Science of NARTH
Former “Ex-Gay” Shares His Experience of NARTH
The “Real Gay Cowboy” Remembers His Friend, Heath Ledger

At this time three years ago at The Wild Reed:
The Real Meaning of Courage
Billabong Koala Park
Last Days in Australia
Back in the U.S.A.

Hi Michael. I am not a follower of fashion either but read this article. Liked the picture also. (Shame on me) I sent this on toa couple of my e-mail friends Down Under.

Hey, I appreciate the picture too! No shame in that, I say. Peace to you, Mark. And thanks for staying in touch.