In the Garden of Spirituality - Jeanette Blonigen Clancy 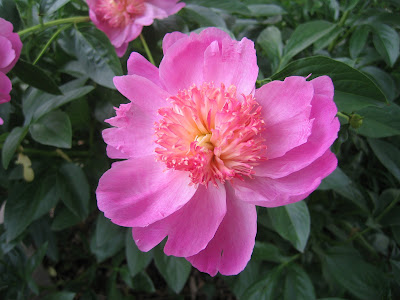 The Wild Reed’s series of reflections on religion and spirituality continues with excerpts from a recent post by Jeanette Blonigen Clancy from her always insightful blogsite, God Is Not Three Guys in the Sky.

I often say that every school of theology should require the works of Carl Jung and Joseph Campbell. They explain the origin of religious beliefs. No, they’re the first to say no one can really explain the depths of the human psyche, but they come as close as anyone.

When I was trying to be an atheist — it was after I realized that Christian mythology resembles pagan mythology — I did what I see my atheist friends do. I chucked it all, all that crap in the Bible and in corrupt churches. And then I found Jung. And then I was given the gift of my Higher Power. And it all fell into place. I can’t remember the sequence of revelations but Joseph Campbell is certainly in there. Oh, and finding my way back to the monastery that had helped to mother me.

With all this forming me, I now say “Amen” to both religious and atheist proclamations. I do this by translating religious language to a degree of symbolism deeper than most Christians can handle. The symbol of Christ, for instance.

Carl Jung teaches us that Christ is a symbol of the inner self in every human person. It is “not peculiar to Christianity alone (although in Christianity [the image has] undergone a development and intensification of meaning not to be found in any other religion).” (Psychology and Religion)

Among the prototypes of Christ that Jung mentions are Asian Indian and Persian figures. Native Americans examples abound, and anthropologists can cite examples in indigenous cultures around the world. Joseph Campbell has found thousands in the myths of the world. Atheists can cite dozens of pagan Christ-like gods and goddesses.

We need to understand that . . . Jesus Christ symbolize[s] a reality in each of us. I can name many dyings and risings in my life and one huge dying/rising experience that lasted many years and transformed me into a person I can love.

What happens in the life of Christ happens always and everywhere. . . . Christ always dies, and always he is born [in the psychic life of every human person].

For greater spiritual depth, we have to take the focus off worshiping an external god, a certain image of God named Jesus, and instead facilitate awareness of every person’s Higher Power, whatever that person likes to call it — the Force, the Holy Spirit, the Buddhist observer, the Hindu Atman, the humanist center of integrity, the inner Christ, the self, the soul . . . It is the wisdom that knows better than our surface thinker. It is our link to the Source of All.

Here is where, I’m afraid, I lose atheists who deny all spiritual reality. I can’t bridge the divide with them, but I hope to bridge with those who scoff at belief in Christian myth but also accept the existence of a spiritual dimension in the universe. They share common ground with thoughtful Christians who have graduated from literal belief to realizing that no religion can define spiritual reality.

We have to realize that all religious language must be understood figuratively, that is, non-literally. Fierce literalism now holds sway among Christians, which, I warn, signals the impending death of Christianity as the prevailing spiritual paradigm.

To us in this period of transition is given the task of preserving the tradition’s spiritual treasures—they are many—by heeding promptings from the Deep, whatever our name for it. We cannot reverse the evolution of human consciousness. Change happens.