If you live in Minnesota, than you've no doubt seen on TV the anti-marriage equality ad sponsored by the National Organization for Marriage (NOM). The ad opposes same-sex marriage and encourages people to contact their legislators and demand that the issue be voted on by the citizens of Minnesota. Not surprisingly, NOM was instrumental in the passing of Proposition 8 in California in November 2008. This particular ballot proposition and constitutional amendment restricts the definition of marriage to opposite-sex couples. 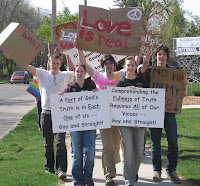 Earlier this year, Archbishop John Neinstedt invited then-NOM president Maggie Gallagher to speak at a St. Paul/Minneapolis Archdiocesan event billed as "Reclaiming the Culture of Marriage and Life." As executive coordinator of the Catholic Pastoral Committee on Sexual Minorities (CPCSM), I helped organize and spoke at a April 17 rally that saw around 300 people gather at the University of St. Thomas to protest the anti-gay and anti-marriage equality words and actions of the archdiocese and of organizations like NOM. 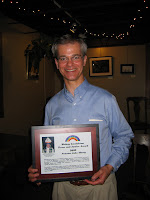 The NOM ad particularly targets Sen. John Marty, who is a strong advocate for marriage equality and has authored one of three marriage equality bills currently before the Minnesota Senate. Senator Marty was at the April 17 rally co-sponsored by CPCSM, and last year he was the recipient of the group’s annual Bishop Thomas Gumbleton Peace and Justice Award. At CPCSM’s Annual Community Meeting last June, Sen. Marty spoke eloquently about his ongoing efforts to achieve marriage equality for all Minnesotans.

In other related news, Tom White, longtime CPCSM supporter and co-founding member of Catholic Rainbow Parents, had a letter about Republican party support of NOM and its way of thinking about same-sex marriage published in last Friday's Star Tribune. Following is the full text of Tom's letter.

Same-sex Relationships: Constitutional Values
Should Protect Them
The Declaration of Independence, the foundation for our Constitution, asks us to "hold these truths to be self-evident, that all men are created equal." The Constitution requires of each U.S. representative an oath that they will "protect and defend the Constitution of the United States."

Yet in Minnesota's race for governor one major party, apparently with nothing positive to present, is spending its money highlighting the negative "wedge" issue of same-sex marriage or domestic partnerships.

The party's hope is that many Minnesotans will ignore the real promise of this nation and deprive a particular group of citizens a particular right granted to so many of us.

Our gay and lesbian brothers were also "created by God with certain unalienable rights, among these are life, liberty and the pursuit of happiness."

In should be noted that just this past Tuesday night, Edina City Council gave final approval to its new domestic partnership ordinance after unanimously moving it forward at their previous meeting.

The Edina ordinance allows couples to register with the city to receive recognition of their relationship and various municipal benefits such as the ability to apply for family memberships at city-run facilities and homestead designations for their property. This recognition will also help provide documentation when couples apply for health insurance that offers benefits for domestic partners. Edina city employees will also be granted the ability to take paid medical leave to care for their partner and children as married spouses are able to do and to access bereavement benefits.

"We were not just the fourth city in this state to have a domestic partner ordinance; we're the first suburb," Edina Mayor Jim Hovland said of the ordinance. "So whether we were the first, fiftieth or five-hundredth, take pride in the fact that your community believes in fundamental fairness for all."

Do you think the Archdiocese has contributed $$ to this NOM campaign?