Spirituality and the Gay Experience 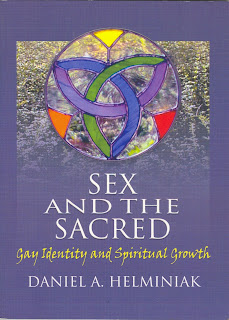 For this sixth installment of The Wild Reed’s special “Gay Pride 2010” series, I share an excerpt from theologian Daniel Helminiak’s insightful (though unfortunately out-of-print) book, Sex and the Sacred: Gay Identity and Spiritual Growth.


Spiritual experience is at the core of homosexual experience. Considerations of coming out and of homosexual love suggest what I mean. Other facets of the homosexual experience could elaborate the point as well: the frequent development of deep, opposite-sex friendships in the gay and lesbian community; acceptance of all people despite social stereotypes; the homosexual experience of loneliness and rejection from earliest childhood; the need to express generativity apart from having children. And let us not forget the compassion, service, sense of humor, and heroic commitment that are so characteristic of the gay community and that are being publicly demonstrated in the face of the AIDS epidemic.

Of course, I have been presenting an optimistic picture. If budding spirituality lies at the core of the gay experience, that spiritual dimension is often obscured and lost. What could be a profoundly spiritual experience often turns out to be defensive, angry, and desperate, or stylish, superficial, and cynical, or else sheepish, obsequious, and self-effacing. The reasons are many.

Organized religion simplistically and consistently misdefines the spiritual. Understandably, then, gay people often fail to recognize the spiritual dimension of their experience, so they often abort the spiritual dimension of their gay experience. The profoundly holy experience of coming out in painful honesty and responsible self-esteem gets sidetracked. Spirituality gets lost in a secret and murky subculture, in the blare of pounding rhythms, in the stupor of alcohol and drugs, in the fantasy of seductive bodies and irresponsible sex acts. The sacred longings for deep love and honest sharing get channeled into superficial and sham amusements.

What a crime! For survival’s sake spiritually sensitive and gentle people must deaden themselves to the music of their souls because the religions are blind to the very essence of the spiritual that they are supposed to foster.

Nonetheless and despite it all, the fact remains: Spiritual experience lies at the heart of the gay and lesbian experience. We need only to recognize and name it as such.

This understanding of spirituality is free from the domination and distortion of religious institutions. The key to the spiritual lies in the human heart. Buried there is a passion for honesty and love, for wholeness and integrity, for the lofty, the noble, and the worthwhile. Buried in the human heart is a passion to encompass the universe.

Being gay makes you grapple with your heart and touch its spiritual core. When you give that core the lead, the whole of your gay experience becomes a genuine spiritual experience. You walk on a path of open-ended growth, a path of constant self-transcendence.

See also the previous Wild Reed posts:
Gay People and the Spiritual Life
The Challenge to Become Ourselves
The Gifts of Homosexuality
Somewhere In Between
Sex as Mystery, Sex as Light
Getting It Right

For previous posts in The Wild Reed’s special “Gay Pride 2010” series, see:
Standing Strong
Growing Strong
Jesus and Homosexuality
It Is Not Good To Be Alone
The Bisexual: “Living Consciously and Consistently in the Place Where the Twain Meet”