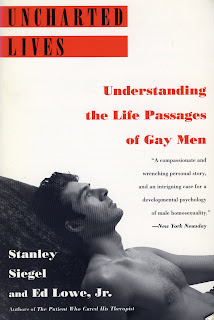 Uncharted Lives was one of the first books I read as an out gay man, which was not long after my arrival in the U.S. from Australia in 1994. At the time and to this day I resonate with its title and many of the experiences and insights it shares. I also appreciate the book’s cover – one that depicts a beautiful man gazing thoughtfully off into the distance. There’s a maturity and seriousness in his look – a groundedness that I was seeking to find and embody as I struggled to understand and define myself as a gay man. Uncharted Lives was one of many resources that, over the years, has helped me discover and flourish from such groundedness of self-awareness and self-acceptance. It's a groundedness that, for me, has a profoundly human and thus spiritual dimension. (It's an intrinsic connection beautifully explored by theologian Daniel Helminiak here).

In large measure, Uncharted Lives explores the link between creativity and homosexuality, and argues that the cultivating of creativity is an adaptive strategy required for social and emotional survival throughout a gay man’s entire life. It seeks to examine the “road maps” that gay men have created to navigate the obstacles and challenges placed before them by a hostile society. “Looking at [the homosexual male] from a presumption of his natural innocence,” the authors note, “and then acknowledging the unnatural barriers to his growth and development, we discover among other things that he enjoys distinct, liberating advantages over the majority and that some of his creative advantages are advanced by the very homophobic, prejudicial behavior that seems most calculated to exacerbate his isolation and self-hatred.

Of course, societal attitudes toward gay people have changed tremendously – even just since 1994 (just look at the advances made in marriage equality and the increased acceptance of homosexual relations in general). And this begs the question: with this ever-increasing acceptance by society of gay people, will we see fewer of those “talented artists, writers, composers, dancers, and actors” who, according to Siegel and Lowe, cultivated their creativity in direct response to the societal oppression and ostracism they experienced as gay men? An intriguing question, don’t you think?

Gay men who develop beyond self-destruction have a singular advantage: they are outside the prejudicial systems.

Ignored and ostracized in turn by the heterosexist community, the gay man in today’s society contends constantly with myths about himself and expectations for himself. Conflicting messages from the world at large both force and encourage him to live his life in a unique way, one vastly different, first, from what his family might have expected of him, and ultimately different from what he might have expected for himself.

From the beginning, because of his awareness of his different-ness, and because a gay child may then separate or isolate himself from the world, he also learns to occupy himself, to entertain himself, to find comfort in solo activities. He develops an apparatus for independence, because he really cannot count on anybody. He may in fact design his own world, refashion, remake, reform, and transform it, filling it with whatever beauty and comfort he cannot find in the hostile, dominant world. These adaptive proclivities are the precursors to skills he later applies in more innovative ways to living a more creative life.

Because he is defined as different, a gay child develops a self-consciousness that translates or converts into an uncommon form of self-awareness. Because he always is monitoring himself in relation to the dominant world, he develops a certain carefulness about his relationship with it. Because he is ostracized and criticized, he tends to identify with other, less fortunate people who fall into like categories – underdogs by and large – and develops a kind of compassion and sensitivity deemed unusual, particularly for a man.

Breaking through the defenses while maintaining his integrity and intimacy in a hostile and unsupportive environment is a heroic achievement at whatever level a gay man manages it. What with the impact of society and culture, the risks in developing close relationships, the necessity of creating a new family, the personal psychological process over the life course, the permutations for his mental health, are that much more complicated, but he is that much stronger and wiser a human being for having plodded his way through his uncharted course.

See also the previous Wild Reed posts:
Standing Strong
Somewhere In Between
In the Garden of Spirituality – Toby Johnson
Dan Furmansky: Why We Have Pride

Thank you Michael for this post. I have always suspected throughout certainly my whole adult life that the particular experience of not fitting into the dominant paradigm fed my innate sense of independence and continual self inventive expression and heightened spiritual sensibility. When I was in second grade, all I did was draw, draw, draw pictures of dinosaurs, horse, antique cars and beautifully dressed women. Surprisingly, the nuns just let me do it if only because they were flabbergasted by how way beyond a "normal" second graders capabilities they were. Of course, they held me back a grade and made me get back to business the next year. In order to survive my high school years I pursued the French Horn and music with an adolescent and lonely passion. When all the other kids were listening to AC/DC, I was entranced with Mahler, Dvorak and Shostakovich. Listen to the second movement of the Shostakovich 5th symphony and you may get my drift.

This passionate aesthetic approach to life has sustained my throughout my life and am now filled with gratitude for the trials that I have endured in always having been gifted as other.

I too wonder if, as we mainstream into cultural acceptance, gay people may loose some of the creative edge; but I suspect that this edge will only diminish somewhat - never totally. For we will never be more than between 4-10% of the population always overwhelmed in some sense by the dominant paradigms. We will, thus, always have to venture forth and create ourselves anew in each generation. I believe this in-between place and this always otherness is intrinsic to the territory that we inhabit. It is shamanic and our special gift to offer to the world. An Eversohappy Pride to you.

Thanks for sharing that Michael. I can relate to a lot of it and it made me think of how I was when I was young.