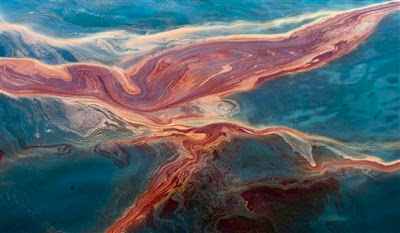 Mark Morford has a powerful commentary in today’s issue of the San Francisco Chronicle about the Deepwater Horizon oil rig explosion and oil spill in the Gulf of Mexico. Following are excerpts accompanied by some heartbreaking images of this disaster’s effects on the environment. 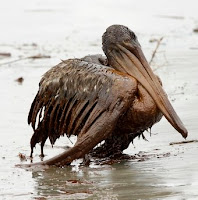 Like any good apocalyptic vision of self-wrought hell, the greatest environmental disaster in U.S. history has its inherent poetry. You see that creeping ooze of black, that ungodly wall of unstoppable darkness as it slowly, inexorably invades the relatively healthy, pristine waters adjacent, and you can't help but appreciate the brutal majesty, the fantastic, reeking horror of this new manifestation of black death we have brought upon ourselves, as it spreads like a fast cancer into the liquid womb of Mother Nature herself.

. . . What a thing we have created. What an extraordinary horror our rapacious need for cheap, endless energy hath unleashed; it's a monster of a scale and proportion we can barely even fathom. Because if you're honest, no matter where you stand, no matter your politics, religion, income or mode of transport, you see this beast of creeping death and you understand: That is us. The spill may be many things, but more than anything else it is a giant, horrifying mirror. 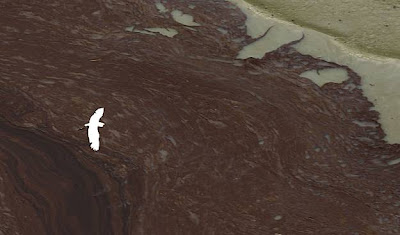 . . . [A]fter all is said and done, it's gloomily nice to think our darkest disaster in a generation could somehow ultimately improve our attitudes, change our behavior, lighten our violent treatment of the planet. As someone recently noted, the BP spill isn’t Obama’s Katrina, it’s actually Big Oil’s Chernobyl. Meaning: a disaster so appalling and devastating it might very well alter the industry and change the course of our energy policy forever. 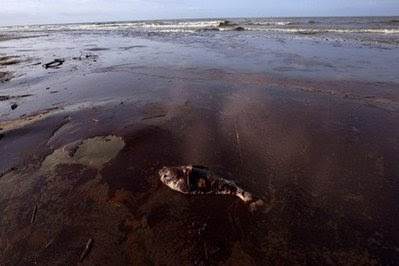 Is it possible? Or, more accurately, are we even capable of such a shift? Is there any silver lining to be found in that black and greasy gloom? This is, perhaps, the most imperative question of all: If we can produce a demon of such extraordinary scale and devastation, can we not also somehow create its exact opposite? Let us pray. 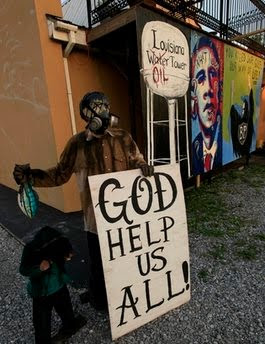 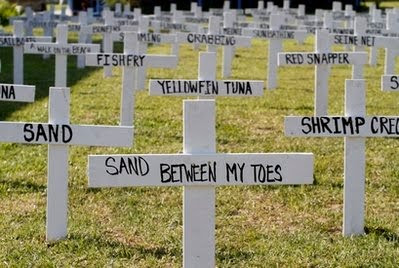 Above: Memorial crosses symbolizing what is lost
due to the Deepwater Horizon oil rig explosion and oil spill
stand in the front yard of a house in Grand Isle, La.,
Tuesday, June 1, 2010. (Patrick Semansky/AP)

My wife and I each have a car. We try to drive them only where & when necessary. We're now considering giving up one car, the older of the two, and using some of the savings to support groups that restore & preserve habitat & wildlife in the Gulf Coast. Penance is not only stopping evil, its putting the energy I put into doing evil into doing good. I may never undo all the direct & indirect harm I did w/2 vehicles, but its a start.