LGBT Catholics Celebrate Being "Wonderfully Made" 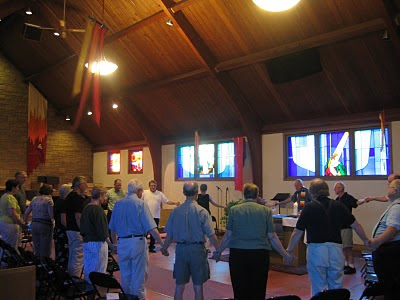 In joy! Oh, in joy do we gather!
Knowing we are all the image of God.

Be strong! Oh, be stronger than hatred,
knowing we are the image of God.

We stand! Oh, we stand and we celebrate,
knowing we are the image of God.

"The Image of God"
Bret Hesla

A small but spirited group of Catholics gathered last night at the House of the Beloved Disciple in South Minneapolis for a "Catholic Mass in Celebration of Our LGBT Brothers and Sisters."

Sponsored by Dignity Twin Cities and the Catholic Pastoral Committee on Sexual Minorities, the Mass was intentionally planned to acknowledge and celebrate the presence of God in the lives and relationships of lesbian, gay, bisexual, and transgender individuals and families. Needless to say, given the official stance of the Church's clerical leadership on such matters, last night's Mass was not an official Archdiocesan event. 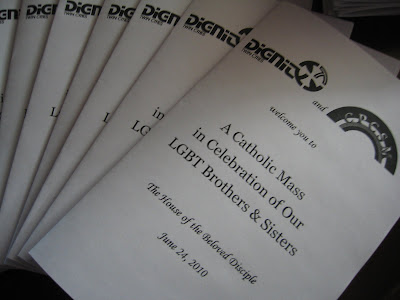 The readings for the day could not have been more perfect for the theme of this Mass of celebration of and with LGBT Catholics, as they all spoke of being called to fully embrace who God created us to be, and the power and strength that comes from truthfully and joyfully claiming who we are as LGBT persons and the living of lives of integrity based on this truth.

Hear me, O coastlands,
listen, O distant peoples.
God called me from birth,
from my mother’s womb he gave me my name.
. . . You are my servant, he said to me,
Israel, through whom I show my glory. . . 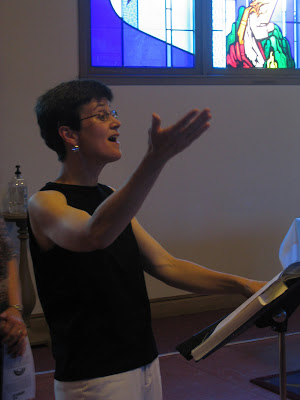 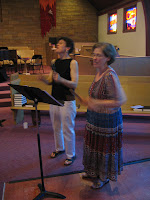 I praise you, for I am wonderfully made.

O God, you have probed me, you know me:
you know when I sit and when I stand;
you understand my thoughts from afar.
My journeys and my rest you scrutinize,
with all my ways you are familiar.

I praise you, for I am wonderfully made.

Truly you have formed my inmost being;
you knit me in my mother’s womb.
I give you thanks that I am awesomely, wonderfully made;
wonderful are your works.

I praise you for I am wonderfully made.

My soul also you knew full well;
nor was my frame unknown to you
When I was made in secret,
when I was fashioned in the depths of the earth.

I praise you for I am wonderfully made. 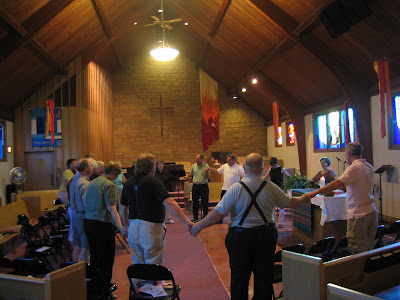 In the Gospel reading (Luke 1:57-66, 80), the act of naming can be seen as a metaphor for insistent and truthful claiming. Within the Roman Catholic Church, LGBT people must consistently claim the truth that they are made in the image of God, and that their relationships have the potential of being both sexually and sacramentally experienced and expressed. We claim this in the face of a clerical caste system that ascribes labels and names of untruth to our lives and relationships. In so doing we name ourselves as "wonderfully made" in the image of our all-loving God.

And so we speak, like John the Baptist's father Zechariah, "blessing God" for our recognition and full embodiment of the sacred gift of our lives as beloved LGBT persons of God.

. . . When they came on the eighth day to circumcise the child, they were going to call him Zechariah after his father, but his mother said in reply, “No. He will be called John.” But they answered her, “There is no one among your relatives who has this name.” So they made signs, asking his father what he wished him to be called. He asked for a tablet and wrote, “John is his name,” and all were amazed. Immediately his mouth was opened, his tongue freed, and he spoke blessing God.

My prayer is that all LGBT people may trust God's love of diversity and God's presence within the totality of their beings, and joyfully and gratefully accept the unique gift of who they are. And I pray, too, for members of the Church's clerical leadership: that they may open themselves to the loving presence of God in the lives and relationships of LGBT persons, and to the challenging yet liberating idea that our Church's teachings can and should be shaped by the findings of science and the lived experiences of LGBT individuals, couples, and families. 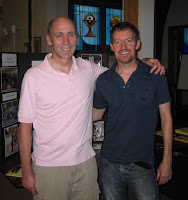 Left: Standing at right with Brian McNeill, president of Dignity Twin Cites. As I'm sure most visitors to The Wild Reed would know, I have served since 2003 as the executive coordinator of the Catholic Pastoral Committee on Sexual Minorities (CPCSM). 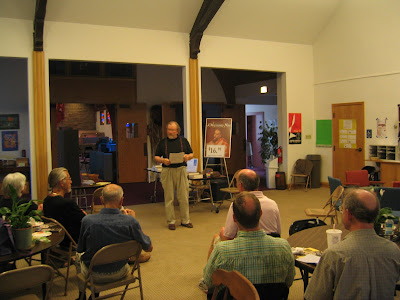 Above and below: After the Mass we gathered for refreshments and to hear Northfield author R.W. “Obie” Holmen discuss and read from A Wretched Man: A Novel of the Apostle Paul, his compelling and controversial book that, among other things, offers a gay perspective on Paul.

A Wretched Man is a stunning fictional account of the early church that reads like real-life. While a work of fiction, this just may be the most authentically historical novel ever written about the lives of the apostles. 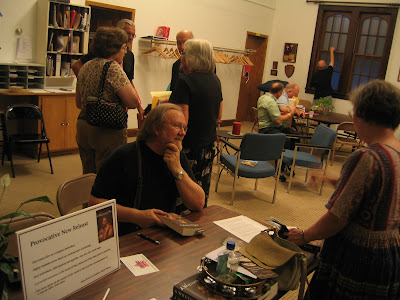 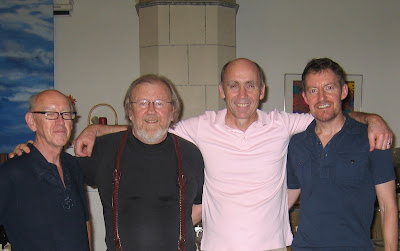 Obie maintains an insightful blogsite called Spirit of a Liberal, one that's included in The Wild Reed's blogroll. We're also both contributors to the "collaborative progressive catholic blogging site" known as The Open Tabernacle. Although we've corresponded by e-mail in the past, last night was the first time we actually met. And I must say it was a pleasure and an honor to finally meet him and his wife, and to hear him speak about and read from his wonderfully descriptive and entertaining novel. 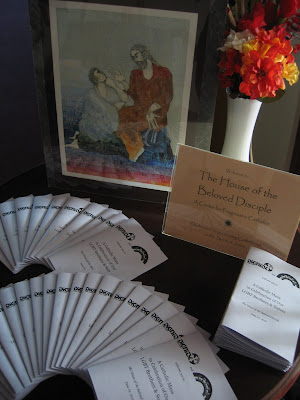 Come! Live in the light!
Shine with the joy and the love of our God.
We are called to be light for the kingdom,
to live in the freedom of the city of God

See also the previous Wild Reed posts:
250+ People Attend Catholic LGBT Pride Prayer Service in Minneapolis
300+ People Vigil at the Cathedral in Solidarity with LGBT Catholics
Why We Gathered
The Many Manifestations of God's Loving Embrace
Celebrating Our Sanctifying Truth
Truth-Telling: The Greatest of Sins in a Dysfunctional Church
To Whom the Future of the Catholic Church Belongs
Choosing To Stay
Knowing What To Do, Knowing Why To Stay
Getting It Right

How beautiful. I feel so emotional as I read this and wish that I could have been you as your shared the Word of God and the Eucharist. Your Archdiocese is surely blessed to have such a wonderful group of people. Many blessings to you all.

Does the Archdiocese let the local Courage (Faith in Action) group have Masses or are they pretty much out in the cold too?