Honoring (and Learning from) the Passion of Saints Sergius and Bacchus 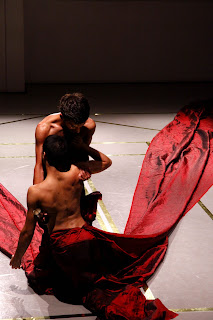 Today is the feast of Saints Sergius and Bacchus – two ancient Christian martyrs who were tortured to death for refusing to attend sacrifices in honor of the Roman god Jupiter. Early Greek manuscripts tell us something else about the pair. They were erastai, or lovers. For some, this indicates an earlier, more accepting Christian attitude toward homosexuality than that which later emerged and which carries on in various Christian traditions, including that of Vatican theology.

In honor of Sergius and Bacchus I share today various artistic depictions of the two saints along with excerpts from Daniel Maguire’s book, Whose Church? – A Concise Guide to Progressive Catholicism. Maguire is a Marquette University moral theologian and author. He will be in the Twin Cities October 21 speaking on "Why You Can Be Catholic and Support Gay Marriage." (For more information on this event, click here.) 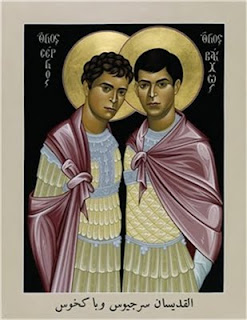 It is part of the mind-shrinking quality of prejudice that it misses much of reality. The result is what smart people call “heteronormativity” – i.e., only heterosexual attraction and pleasure is “normal.” In the current political mantra, "Marriage is between a man and a woman."

. . . If you believe that God is the author and creator of nature, then sexual diversity is a Godly idea. Gay is not just good: it’s holy! Harmful options can be called immoral, but not all the sexual options are self-evidently harmful.

The Catholic hierarchs, lagging again behind the wisdom of the Church, are very upset by same-sex unions. “Disordered,” they call them. Help, however, is available to these bishops, right in their tradition. Same-sex unions are found in the first thousand years of Christianity and were even liturgically celebrated. Rather than fulminating against same-sex unions, the bishops should kneel and say a prayer to Saints Sergius and Bacchus, a same-sex couple whose marriage is preserved in a seventh-century icon showing Jesus as the pronubus (official witness, “bestman”) at their wedding. 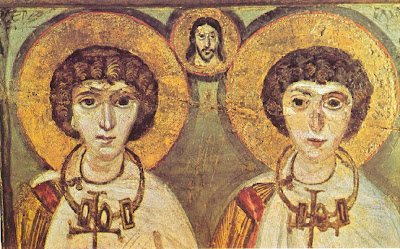 In its sensible moments, Catholic teaching, relying on the Bible, recognized that people are not prone to celibacy. Indeed, they saw it as a heroic effort when monks and nuns undertook to be celibate throughout their lives. Jesus said of celibacy, “Let those accept it who can” (Matt. 19:12). Very sensible. Voluntary celibacy for a good cause is something some can do, but it was seen as a special talent, a special gift that not all have. The Vatican Council called it “a precious gift of divine grace which the Father gives to some persons,” but not to all. Abstaining from all sexual activity is seen by the council as something “unique.” You cannot demand from all homosexual people that which is “unique.” St. Paul recognizes the same when he says, “It is better to marry than to burn” (1 Cor. 7-9). What kind of Gospel “good news” would it be to tell all gay people that their only choice is to “burn, baby, burn”? 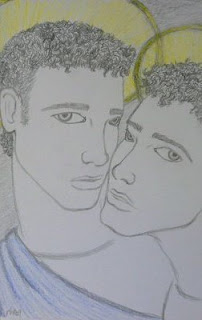 The view that homosexual people are condemned to involuntary celibacy for life is as cruel as it is absurd. And it is very Catholic to say so. Saints Serge and Bacchus would agree.

Image 1: A still from Elastic Theatre's production of The Passion of Saints Sergius and Bacchus.


See also the related Wild Reed posts:
The Archangel Michael as Gay Icon
St. Michael the Archangel: Perspectives and Portraits
The Allure of St. Sebastian
St. Francis of Assisi: Dancer, Rebel, Archetype
Mary of Magdala
The Inherent Sensuality of Roman Catholicism
Officially Homophobic, Intensely Homoerotic
Song of Songs: The Bible’s Gay Love Poem
“More Lovely Than the Dawn”: God as Divine Lover
Charis
Lover of Us All
It Happens All the Time in Heaven

Thanks for an informative and inspiring post, and for linking to my piece about Sergius and Bacchus at Jesus in Love Blog. My focus is LGBT spirituality and art, so I am especially excited to discover Ray Alvito’s work here. I will try to get in touch with him so I can introduce his art to readers at the Jesus in Love Blog.