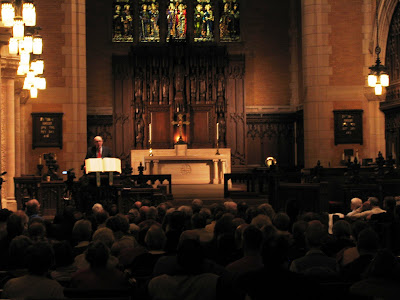 Thanks to everyone who came to hear Daniel Maguire speak last night at St. Mark's Episcopal Cathedral on why one can be Catholic and support gay marriage.

It was an incredibly successful event in so many ways. For a start, we had 300-400 people in attendance! Plus, we heard a great presentation by Daniel - one filled with insight, compassion and humor!

A special "thank you" to all at St. Mark's, especially Dean Spenser Simrill, Mary Beth Helfrich, and Philip and Jason and all the guys of the St. Mark's LGBTQ group who provided such great help in ushering and setting up for the reception after Daniel's talk. And the refreshments provided by the Catholic Rainbow Parents were simply delicious. 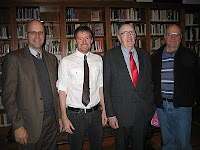 And a big "thank you," too, to our special guests Bob Radecki and Paul Lipetzky of Return the DVD and Lucinda Naylor of DVD to ART. 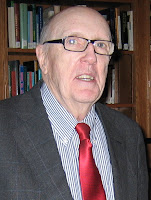 And finally, heartfelt thanks to Daniel Maguire for so generously sharing his time and wisdom with us.

Unfortunately the local media fell short in their coverage of last night's informative and insightful talk by Daniel. However, there was a CNN reporter present who filmed his talk and interviewed him this morning. I look forward to seeing what becomes of all of that. 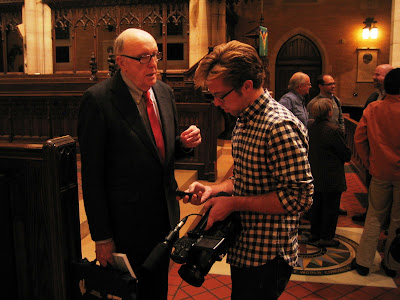 CPCSM president and co-founder David McCaffrey also filmed Daniel's presentation and we intend having it available on DVD for anyone who is interested. I'll keep you posted on the progress of what we could call the other DVD project!

I will, of course, share at The Wild Reed highlights of Daniel's presentation. Until then, here are my introductory remarks I made as emcee at last night's event.


The Human Rights Campaign recently declared Minnesota as the “number one battleground for tolerance.” It made this claim in the wake of a series of statements and actions from prominent leaders opposing basic protections for LGBT people.

One of these leaders cited was MN Family Council President Tom Prichard. Another was Republican candidate for Governor Tom Emmer. A third was Archbishop Nienstedt of the Roman Catholic Archdiocese of St. Paul-Minneapolis.

All of us gathered here this evening are well aware of the major anti-gay marriage campaign being undertaken by Archbishop Nienstedt and the MN Conference of Catholic Bishops. It’s a campaign that that elicited strong responses from people – with many expressing anger at the cost and timing of this campaign, and what they see as the bishops’ efforts to influence voters to support a political candidate who shares the bishops’ desire to discriminate against a minority group in civil society.

Others are quite simply fed-up with the clerical leadership’s impoverished understanding of human sexuality being passed off as “Catholic belief” when clearly many of the teachings that comprise this closed-circuit belief system (be they concerned with contraception, homosexuality, or the meaning and purpose of sex) have simply not been received and thus accepted by the faithful.

As you know, a major component of the bishops’ campaign was the producing and distributing of a DVD to 400,000 Catholic households throughout the state. This DVD features a segment produced by the Knights of Columbus and comprised of various talking heads disseminating falsehoods about how gay marriage harms straight marriage and threatens the well-being of children.

The DVD also features a segment in which Archbishop Nienstedt shares his clear disdain for the role of civil government in protecting the rights of minorities. Indeed, those within civil government charged with this duty are dismissed by the Archbishop as “ruling elites.”

Of course, the irony is that within the sphere of Roman Catholicism, Nienstedt himself is the head of a “ruling elite” that does not allow “the people,” i.e., the laity, a say in decision-making.

Thankfully, such hypocrisy is not lost on people in this day and age – nor are the scandalously misguided priorities of the bishops' overall campaign. As a result we are gathered here tonight to hear the renowned Catholic theologian Daniel Maguire share his thoughts and insights on why we can indeed be Catholic and support gay marriage.

But before I introduce Daniel, I want to acknowledge and introduce some people with us this evening who have been at the forefront of the Catholic people’s challenging of the clerical leaderships misguided priorities and anti-gay efforts.

First is a Catholic couple, Bob and Lori Radecki, who in response to the MN bishops' anti-gay marriage DVD campaign, made a financial contribution to St. Stephen's Human Services and Episcopal Community Services for every unwanted copy of the DVD that was donated to them. Closely involved in this project is Paul Lipetzky. Here to give us an update on their work is Bob Radecki and Paul Lipetzky.

[At this point Bob and Paul shared an update on their Return the DVD project.]


“Art Changes Everything.” That’s a belief of one local artist, a woman who recently lost her position as artist-in-residence at the Basilica of St. Mary for going public with her plans to create a work of art with unwanted copies of the bishops' DVD. Please welcome Lucinda Naylor.


And now I have the great honor to introduce our keynote speaker this evening, Daniel Maguire – a man who has been described as one of the "most important Roman Catholic social ethicists writing today."

Daniel has a degree in Sacred Theology from the Pontifical Gregorian University in Rome, one of the world’s major Catholic universities. For many years he has taught in the theology department of Marquette University in Milwaukee.

A prolific writer and gifted speaker, Daniel specializes in religious ethics focusing upon issues of social justice and medical and ecological ethics. Among his many honors he’s been declared by Ms Magazine as a “male hero” – a man who “takes chances and makes a difference.”

Daniel, however, maintains that support for same-sex marriage can be found in all the world religions, including Roman Catholicism. 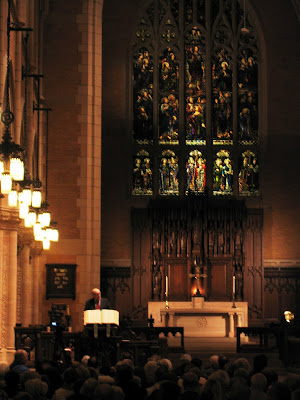 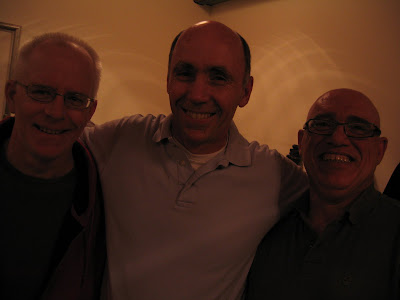 Above: Friends Rick, Brian and Steve at the reception that followed
Daniel Maguire's presentation last night at St. Mark's Episcopal Cathedral.
Brian is president of Dignity Twin Cities and convener
of the Rainbow Sash Alliance USA. 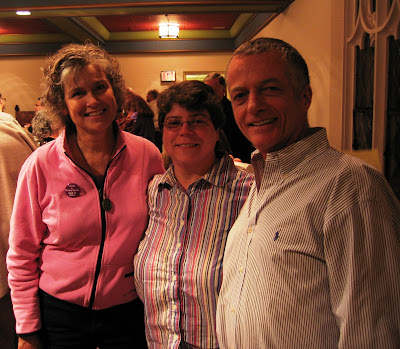 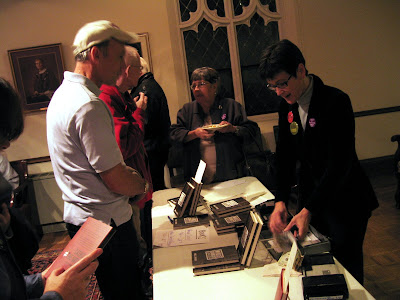 Above: My friend Kathleen from St. Martin's Table Restaurant and Bookstore,
selling copies of Daniel's book Whose Church? – A Concise Guide to Progressive Catholicism. 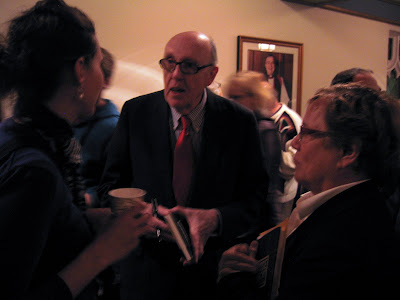 Above: Daniel Maguire signing copies of his book
Whose Church? – A Concise Guide to Progressive Catholicism. 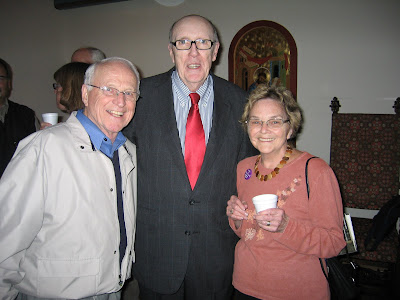 Labels: Daniel Maguire, The Struggle for Marriage Equality in Minnesota

Great job. Thanks for this wonderful story. Keep up the good fight. Peace & blessings.

Thanks for all you did to make such a successful event, Michael. All those years ago while at Marquette I was never able to get into a single section of one of Daniel's classes. He laughed appreciatively last night when I told him I felt like I finally got my class! :)

A great evening, Michael. Thank you so much for your leadership!

I just heard good things about this from K.O.! Glad it went well. I wish I could have heard him.

I wish I could have been there!

I honestly think it was closer to 500. It was interesting and he definitely has that sarcastic Irish wit. A brilliant man and was an honor to meet him too.