The Premise of All Forms of Dance 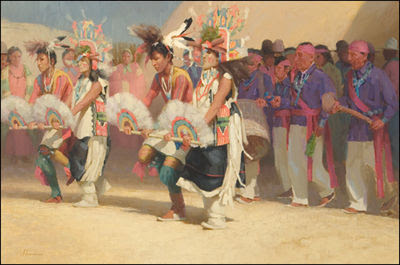 Continuing with The Wild Reed’s series on dance, I share this morning the first of two excerpts from Jamake Highwater’s book Dance: Rituals of Experience.

I have to say that Highwater’s description of the Pueblo nations’ concept of kachina as “a cosmic, ineffable force,” reminds me of Otto Rudolf’s concept of the holy as that which is numinous (i.e., a “non-rational, non-sensory experience or feeling whose primary and immediate object is outside the self”), and Paul Collins’ contention, based on the work of Otto, that “God is wholly other, not anthropomorphic, not domesticated.”

“God,” writes Collins, “is ultimately a mysterium in the sense that the divine is a phenomenon to be explored, not a reality to be possessed or defined.”

And how is this related to dance?

Well, as Highwater notes in the excerpt below, “the creative power of rituals like the kachina dances lies in their capacity to awaken imagery within us, to compound mystery with more mystery, and to illuminate the unknown without reducing it to the commonplace.” Such a capacity, he contends, is “the premise of all forms of dance.” 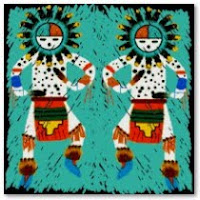 The kachina of the Pueblo tribes is not a god but a cosmic, ineffable force, existing in three different forms: the first is unseen and unimaginable; the second is the reflection of the kachina power in a human “impersonator” or dancer; and finally, there is the doll which is untouched by power of kachina but duplicates its appearance.

In the kachina dances there is no possibility for facile explanations. Nothing can make an “intelligible” experience out of an illogical but meaningful ritual act any more than it is possible to explain a poetic metaphor which exists, in the first place, because it embodies something beyond the grasp of logic. The ritual dramas of the Southwest tell us nothing at the same time as they suggest an entire cosmology to the initiated. Ignoring the world of objective data, which has been so explicitly depicted in most Western art and philosophy, the creative power of rituals like the kachina dances lies in their capacity to awaken imagery within us, to compound mystery with more mystery, and to illuminate the unknown without reducing it to the commonplace.

It seems to me that this is the premise of all forms of dance. When it disappears from an idiom of dance, what remains is a form of entertainment rather than art. 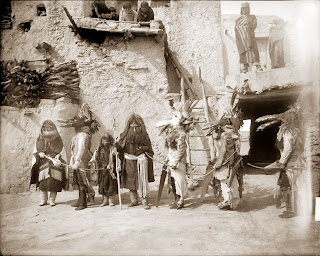