Bring Out Your DVDs! 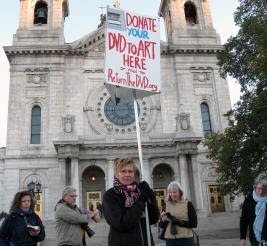 . . . It's dawn on Sunday, and Lucinda Naylor stands on the sidewalk outside of the Basilica of St. Mary in Minneapolis, the church where until recently, she was artist-in-residence for 15 years. She was suspended from her job after she announced on Facebook her intention to create a personal art project out of [copies of the MN Roman Catholic bishops' anti-gay DVD].

She's holding a sign drawing attention to her "DVD to ART" project. At her feet are three cardboard collection boxes. Parishioners arriving for early morning mass start filling them up, tossing in the DVDs they received in the mail.

Two weeks ago, Minnesota's Roman Catholic bishops launched a campaign against same-sex marriage, mailing a DVD to every Catholic home in the state. Parishioners in the Twin Cities heard a message from Archbishop John Nienstedt.

"The Archdiocese believes that the time has come for voters to be presented directly with an amendment to our state Constitution, to preserve our historic understanding of marriage. In fact, this is the only way to put the one man-one woman definition of marriage beyond the reach of the courts and politicians," Nienstedt said on the video.

The church's position on same-sex marriage certainly wasn't a surprise to Naylor, but she says she felt the step of spending $1 million from an anonymous donor to produce and mail the DVDs, six weeks before the Nov. 2 election, was divisive.

"I know a lot of people who were feeling like the church is sort of pushing them out. And this DVD was really just another way of shoving them out the door, and I didn't want to see good, loving Catholics being shoved out the door," said Naylor. "Every DVD that I collect and turn into a piece of art stands for a Catholic who's saying, 'No, I don't want to go there, I want to be an inclusive and loving Catholic.'"

Some friends and volunteers have shown up to help Naylor. Cars slow down on Hennepin Avenue, and people hand DVDs out their car windows.

People of all ages -- men, women, retirees and hipsters -- carry their white envelopes up to Naylor's sidewalk troop.

"Glad to be rid of it," said one man has he drops his DVD in the box.

Some hug Naylor, others want to talk.

. . . There are no counter-protestors or hecklers this morning. A Basilica spokeswoman says the church has nothing to add to the story. Twice, she carries coffee out to Naylor and her friends. The liturgist brings out doughnuts to his old co-worker.

As mass lets out, parishioners express a variety of opinions, though no one criticizes Naylor's DVD to Art project.

For some reason, Michael, you neglected to include the sentence that said that "almost" 600 DVDs were collected Sunday.

I calculated that it would be 8 stacks, 6" high. [That includes the packaging]. Do you think you will have room to display the art that will be made.

Now, Ray, don't be such a snarky old size-queen.