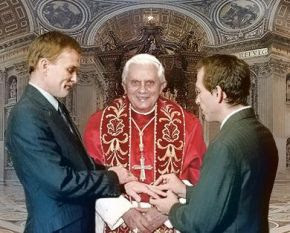 “You Can Now Kiss the Groom”

I had the following commentary published in the Minneapolis Star Tribune back in December of 2004. I wrote it in response to what had been described as an “anti-gay exorcism” that someone had performed at the Cathedral of St. Paul, resulting in thousands of dollars of damage to the building.

As you’ll see, the point I attempt to make is that if such anti-gay behavior on the part of an individual is going to be denounced by the church as “misguided” and “deluded” (which an archdiocesan spokesperson did do), then so too should the church’s language and theology that fuel and justify such behavior. In other words, the clerical leadership of the Roman Catholic Church needs to recognize the direct connection between its own anti-gay language and how the internalization of this language leads to anti-gay behavior on the part of both individuals and institutions.

It’s a message that, sadly, six years later, has still yet to be taken to heart by the church’s clerical leadership. Accordingly, all that’s represented by Kevin Sharkey's image, above, remains a reality yet to be realized.

In response to an act of vandalism at the Cathedral of St. Paul last month, church officials have declared that an “anti-gay exorcism” involving the “ritualistic sprinkling of oil and salt” was the action of a “deluded” individual.

Yet for many gay, lesbian, bisexual and transgender (GLBT) Catholics, it is difficult to separate such delusional anti-gay behavior from the increasingly anti-gay rhetoric of the Catholic Church – rhetoric that is so contrary to the lives of GLBT Catholics that it seems equally delusional.

When the church hierarchy labels GLBT people’s longing for relational intimacy as “intrinsically evil” and “objectively disordered,” it gives subtle permission for anti-gay behavior. If such behavior on the part of an individual is going to be denounced by the church as “misguided” and “deluded,” then so too should the church’s language and theology that fuel and justify it.

The hierarchy needs to recognize the direct connection between its own anti-gay language and how the internalization of this language leads to anti-gay behavior.

Some within the hierarchy have made the connection. Thomas Gumbleton, bishop of Detroit, has described the church’s language concerning homosexuality as “cruel” and “unjustified.” He goes on to advise: “I would never expect a parent to say [such words] to his or her child.”

As a gay Catholic man, I respectfully challenge the leadership within the church to prayerfully reflect upon Bishop Gumbleton’s words, as well as those of Dr. Rowan Williams, the archbishop of Canterbury. Williams recently declared to the world’s Anglican churches, “Any words that could make it easier for someone to attack or abuse a homosexual person are words of which we must repent.”

GLBT Catholics and their families who know and declare that their lives and relationships are a gift from God are accused of wanting to “change the church.” Fueling this accusation is the erroneous belief that the Catholic Church is somehow unchanged and unchangeable, somehow incapable of growing and developing. If this were the case then not only would the Catholic Church still be teaching that the sun revolves around the earth, but it would also be ambiguous on the moral issue of slavery and hostile to the idea of democracy.

Catholics open to the development of church teaching have also been accused of basing their morality on cultural trends. Such suspicion of culture denies the reality that it is through a range of relational contexts that the church as the people of God has always experienced God’s transforming presence.

For example, in the past women were judged to be incapable of many of the things men could do. That view has been nearly erased due to the dramatic emergence and involvement of women in church and society.

Those of us – gay and straight – within the Catholic Church who embrace a theology of sexuality that is reality-based and scientifically supported, understand our efforts as revealing God’s love in the lives and relationships of all people – gay, lesbian, bisexual and transgender people included. We’re doing what our brother Jesus did – making visible the reign of God already in our midst but so often hidden by oppressive structures and by ignorance and fear.

History shows that the overcoming of such fear and ignorance takes time. Nevertheless, with a growing number of Catholics, I look forward to the day when the church’s teaching on sexuality joyously proclaims God’s presence in the lives and relationships of GLBT people, as it should for all.


Image: “You Can Now Kiss the Groom” by Kevin Sharkey (2010). Writes Simon Boyle about Sharkey’s artwork:

Critically acclaimed Irish artist Kevin Sharkey produced the startling image after the Pontiff labelled gay marriage one of the most “insidious and dangerous” threats to the world today. Donegal-born Sharkey, 47, says he hoped the work would put the Pope’s claim in context, and show the couple in an innocent and inoffensive light.

Sharkey said: “I got the idea for this piece when I read a newspaper headline, where the Pope had labelled gay marriage the biggest threat to our society. I am familiar with the traditional stance which the Catholic Church is expected to take, but I just felt condemning thousands of innocent people with such strong remarks is both unchristian and insulting.

“When I think all the evil in the world, from terrorism, to disease, to famine, I find it horrifying that a man with The Pope’s incredible power and influence can only focus on something as minor as gay marriage. I think some of the recent revelations of disgraceful behaviour by priests within the Catholic Church is much more evil and disturbing than two people who wish to formally express their love.”

This is an incredible argument (especially the fact that the church has always and always will be changing). It's the #1 fact I go to when people question my pro-LGBTQ stance - the Church has been changing since the moment of the Resurrection. Change isn't bad. It is in fact necessary in order for the Church to teach the reality about God and humanity to the faithful.