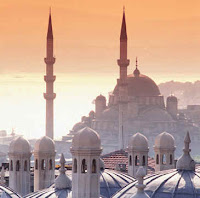 Continuing with The Wild Reed’s series on Istanbul, I share this evening some wonderfully descriptive excerpts from Mary Lee Settle’s 1991 book, Turkish Reflections: A Biography of a Place.

Not only do these excerpts provide a compelling historical overview of the city we now call Istanbul and the ancient region of Anatolia that is now part of modern-day Turkey, but a colorful description of “the Father of Turkey,”

Anatolia was the home of some of the oldest civilizations in the world, kingdoms built on kingdoms like the strata of geological time. Noah landed on one of its highest mountains, Ararat. Çatal Höyük is a central Anatolian city eight thousand years old. The Hittite Empire predated the Greek city-states along the coast by more than a thousand years. It was the major power in the center of Anatolia when Troy was besieged by provincial tribesmen from the mainland of Greece. In the second millennium the Greeks began the colonies along the Aegean coast that would become their city-states. Alexander the Great conquered it, Persia ruled it, the Romans stabilized it for fifteen hundred years, and then lost it. 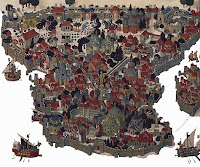 In A.D. 330, the Roman Emperor Constantine the Great moved the capital of the Roman Empire from Rome to the small seaport of Byzantium, on the Bosphorus between Asia and Europe, rebuilt it, and renamed it New Rome. It was known almost at once all over the Roman world as Constantinople. His empire was not thought of by its own citizens, or by its contemporary enemies for the eight hundred years of its survival, as anything but Rome; but through the years historians, for convenience, have called it by the name we know now – the Byzantine Empire.

. . . The eleventh century brought the greatest change there had been for a thousands years on the plains that rose behind the Aegean coastal mountains. Anatolia had been Christian ever since Christianity had been made the state religion by the Emperor Constantine in the fourth century. With the conquering of the Byzantine army by the Seljuks, Christianity was replaced by Islam, a new and far more tolerant religion after the schismatic and heretical wars of the Christians. 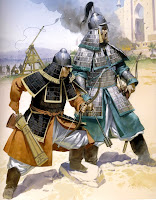 It was on “the dreadful day,” as the Byzantines called it, Friday, August 19, 1017, at the Battle of Manzikert that the Seljuk Turks, newly converted to Islam, broke the power of the Byzantine Empire. After Manzikert, the popes and the clergy inflamed the religious and the adventurous impulse in Europe, and, led by itinerant monks and mercenaries, the First Crusade met the Seljuks and was defeated by them. It was in the years of the Crusades, when an infidel enemy was needed to rouse Christian passions, that there began the Eurocentric misunderstanding of the Turks. They have been partly unknown ever since.

In the thirteenth century the Mongols began their slow and inexorable invasion of Anatolia, and the face of the high land changed again, and again and again, as the Seljuk kingdom broke apart under family feuds and Mongol onslaughts.

There was the Black Plague and the country nearly died, and what came out of it, in the fourteenth century, was a line of ghazis that ruled a broken land of quarreling emirates. One of the emirates was that of the tribe of the Osmanli, and it grew into the Ottoman Empire, to last another six hundred years.

. . . Then in the twentieth century came the last ghazi who has appeared, who was able to defeat the British and Australian forces at Gallipoli, go east almost to the Russian border, come back with an army of survivors of civil war and Ottoman neglect that had been defeated by the Allies, and force the retreat of the European-backed Greeks from central Anatolia near Ankara, all the way back to the Aegean Sea. 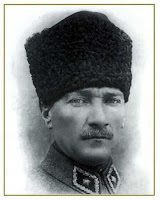 In many ways the last has been, maybe because we have been able to see him at work, the most astounding of Turkey’s ghazis. The presence of Mustafa Kemal Atatürk, which means “the Father of the Turks,” still permeates Turkey, long after his death in 1938.

Here is what The Cambridge History of Islam says about Atatürk: “He was a strong man, a ruler by the virtue of his training, but not a dictator. He detested the title and continuously stressed his allegiance to national sovereignty. Atatürk was a soldier-ruler and as such had a keen understanding of the virtues and defects of his people. Unlike the Ottoman ruling class, he used his insight for the people’s own good. In so doing he did not beg for popularity, but ordered, punished, and rewarded with the habit of a soldier used to obedience. But beneath the determined appearance there was a man, the orphan who was raised in the healthy, human atmosphere of the village, and then the small Balkan town of Salonica. He preserved a freshness and spontaneity towards life even after he became the most powerful man in Turkey.” That could, in essence, be a description of the ghazi over a thousand years.

For seventy years, the Turks have been in love with Atatürk. When he died, and his place was taken as president by the less-charismatic İsmet İnönü, a woman in İstanbul mourned, “Turkey has lost her lover and now must make do with her husband.”

Hi Michael, my best friend in Australia was in Istanbul in September so I e-mailed him this story. You are a gifted writer and The Wild Reed is the greatest.