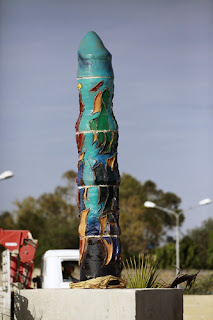 “Phallic Art” Sparks Fight
Ahead of Pope’s Visit
Colonna Mediterranea, a monument near a major airport in Malta, is facing removal before the Pope's visit to the country this weekend, after the local mayor worried it may be too “phallic.”

Mayor John Schembri described the sculpture as “obscene” and “embarrassing,” and it should be removed “as a sign of respect” for Pope Benedict XVI, he said.

The sculpture, created by artist Paul Vella Critien, has been on show in the town of Luqa since 2006. It sits at the entrance to the town, near the planned route for the Pope’s visit. It is said to represent a symbol dating back to ancient Egypt.

Critien was unrepentant about the statue, calling his critics “ignorant” and “uneducated.”

Others have shown their support for the work of art. A Facebook group called ‘Save the Zobb Monument’ has been set up, with over 1,300 members at the time of writing.

The group’s creator is candid in his support of the monument. “Look: I don't like having a massive erect penis slap bang outside our airport either . . . but everybody accepted it until the Pope decided to pay us a visit,” writes Raphael Vassallo in the group’s description.


Hilarious. Hey, who knows, maybe the pope will like it. And besides, I think he has more important things on his mind than Malta’s colorful “phallic art.” Mind you, it’s just as well that Cardinal Tarcisio Bertone won’t be around. He’d probably blame it all on homosexuality!

Anyway, here’s hoping they, er, keep it up.


See also the previous Wild Reed posts:
Corpus Christi
The Inherent Sensuality of Roman Catholicism
What Is It That Ails You?

This actually made me smile. I could use a laugh after reading about Cardinal Bertone. When will the hate stop?