Joseph Palacios: "The Church is Not the Victim" 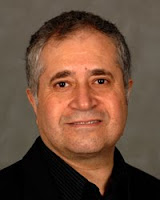 An excellent essay by Joseph M. Palacios (pictured at right) has recently been published at ReligionDispatches.org. Palacios is an Adjunct Professor of Liberal and Latin American Studies at Georgetown University and the director of the Catholics for Equality Foundation. He wrote this particular piece in response to statements by Vatican UN representative Archbishop Silvano Tomasi. 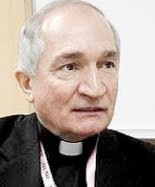 During a debate last month on the UN's “Joint Statement on Ending Violence and Related Human Rights Violations Based on Sexual Orientation and Gender Identity,” Tomasi (left) stated that, based on "natural law" anthropology, LGBT persons are, by their nature, “intrinsically morally disordered.” Furthermore, ending discrimination against LGBT persons would make those who oppose such human rights the real victims.

Following is an extended excerpt from Palacios' essay.

. . . Since the early 1980s and the ascendency of Cardinal Ratzinger as head of the Congregation of the Doctrine of the Faith (CDF), the moral theology of the Church has become increasingly locked into a framework of natural law anthropology, which is a logic based on male and female roles as pro-creators in the natural order of a biologistic social order emphasizing the nuclear family as the first cell of society.

This logic also simplistically views a natural order to the human body, meaning that each part of the body has a function that is connected to the whole person and humans cannot change these natural functions – particularly sexual functions. Natural law anthropology does not take into account anomalies in nature that might account for homosexuality and a variety of functional variations that can occur in different humans.

More problematic in Tomasi’s understanding of sexual orientation is the non-recognition of LGBT persons resulting in the Church’s negation of the social, psychological, cultural, and political realities in which they live. The fact is the perpetrators of violence based on sexual orientation and gender identity do recognize this identity and base their anger, rage, hate, and revenge on people’s external identity and not on the “feelings and thoughts” of the victims. For the Vatican to not acknowledge this is a denial of social reality and the behaviors and attitudes reflective of sexual orientation and gender identity.

Prior to Ratzinger’s emphasis on natural law anthropology as foundational to contemporary moral and social issues, the Church’s social justice doctrine might have had tremendous influence in the creation of a positive Catholic LGBT human rights agenda. Such an agenda might emphasize the following dimensions of human life and pertinent social justice doctrine that have been developed since the first social encyclical, Rerum Novarum, of 1891:

• Social-Psychological: Dignity of the human person; Human development of the whole person

• Social Rights: Option for the poor and marginalized in society

• Cultural: Freedom of participation and association in civil society


Because the Vatican denies sexual orientation and gender identity recognition the above tenets of Catholic social justice doctrine cannot be legitimately actualized by priests, religious, lay leaders, teachers, catechists, and others within the Church itself. The natural law arguments of sexual morality and ethics have long been discounted by clergy and laity – especially natural law deductive arguments against birth control, in vitro fertilization, masturbation, male sterilization, stem cell research, same-sex civil marriage and adoption. Yet the longer Catholic tradition of connecting faith with reason and the doctrine of primacy of conscience has empowered many Catholics to look at the social reality of gays, lesbians, and transgender persons and connect the more compassionate aspects of the biblical tradition and Catholic social justice teaching.

Through a more comprehensive inductive logic Catholics use reason to see and analyze empirical injustice and then apply biblical principles and social justice teaching to the social context of injustice – a bottom-up approach to justice in the world. Not surprisingly, the international scope of the clergy abuse scandal has diminished the teaching authority of the hierarchy on sexuality. Catholics recognize that they do have gay, lesbian, and transgender brothers and sisters in their families, among their friends, in their communities and workplaces. Many recognize their difference and accept it in the same positive way they accept ethnic, gender, cultural, and age difference – as part of one’s external identity that should be respected and accorded full human dignity, even if one doesn’t fully understand the difference in one’s life.


Faith that Does Justice

Social justice-oriented Catholics have been able to utilize the positive aspects of social justice doctrine as a “faith that does justice” in civil society and politics, particularly through organizations like Catholics for Equality, Catholics United, Dignity, and Call to Action – as well as in their local parish and diocesan social justice ministries and in faith-based community organizing. Recent polling by Public Religion Research Institute shows that U.S. Catholics are the most progressive Christian body with 63% supporting civil marriage for same-sex couples and 69% believing that homosexuality is not a moral issue. The Human Rights Council’s recent statement was signed by all of the Catholic countries of Europe and Latin America. Civil marriage for same-sex couples has been ratified in the Catholic countries of Spain, Portugal, Belgium, Argentina, and Mexico. Acceptance of LGBT persons is not just an American phenomenon, it’s a broadly international one with a strong Catholic character.

Of course, is precisely these trends that are most disturbing to the Vatican, especially as younger Catholics around the world are even more accepting of homosexuality and the legitimacy of sexual orientation and gender identity than their parents and grandparents. Sadly, in the fight against LGBT rights the Vatican and the U.S. hierarchy is throwing its hat in the ring with some of the most powerful and well-funded voices of religious fundamentalism in the U.S., Africa, and Latin America.

To read Joseph Palacios' essay in its entirety, click here.

See also the previous Wild Reed posts:
The Vatican's Actions at the UN: "Sickening, Depraved and Shameless"
Stop in the Name of Discriminatory Ideology!
The Blood-Soaked Thread
The Pope's "Scandalous" Stance on Homosexuality
Catholic Church Can Overcome Fear of LGBT People
Responding to Bishop Tobin's Remarks on Gay Marriage
The Many Manifestations of God's Loving Embrace

Once one accepts birth control it becomes very difficult to deny rights to LGBT people. Lay Catholic heterosexuals are connecting those dots. The hierarchy is unable to do so because connecting those dots runs smack into a number of papal encyclicals. It's not about social justice. In the end it's about papal infallibility---a papal infallibility that is now beginning to look much more like papal intransigence, having nothing to do with reason or 'natural' law.