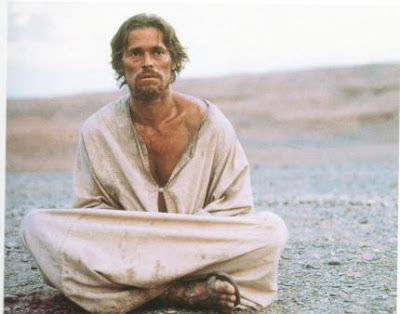 This excerpt is accompanied by images of Willem Dafoe as Jesus from the 1988 film The Last Temptation of Christ. 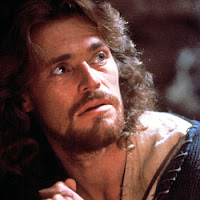 So far we have discussed only Jesus’ willingness to die; we have not yet considered his actual death. It is easy enough to understand what it means to be willing to die for humankind but under what circumstances would one actually die for humankind? Are there circumstances in which one could serve the world better by dying for it than by continuing to live for it?

Jesus must have been aware of the dangerous consequences of what he was doing and saying. Herod had silenced John the Baptist, it was now rumored that he wished to silence Jesus too (Lk 13:31). After the incident in the Temple, Jesus’ life was in such danger that he had to go into hiding. It was during this time that he decided to go to Jerusalem to die (Mk 8:31 parr; Lk 9:51; 13:33). Why?

Jesus seems to have been faced with the alternatives of remaining in hiding to avoid death or coming out of hiding to face death. The four to five thousand men together with Peter and the disciples wanted him to come out of hiding as the Messiah with an army or some other display of power so as to conquer his opponents in Jerusalem. But his weapon was faith, not force. His intentions were still, as they had always been, to awaken faith in the “kingdom.” He could not do this very effectively by remaining in hiding but if he came out of hiding in order to preach he would sooner or later be caught and silenced – unless his death itself could become a way of awakening faith in the “kingdom.”

The service which throughout his life Jesus had rendered to the sick, the poor, sinners and his disciples and which he tried to render to scribes and Pharisees and everyone else, was the service of awakening faith in the “kingdom.” There was no other way of saving people from sin, suffering and the catastrophe to come. There was no other way of enabling the “kingdom” to come instead of the catastrophe. But if he was prevented from doing this, prevented from preaching or awakening faith by word and deed, what was he to do? 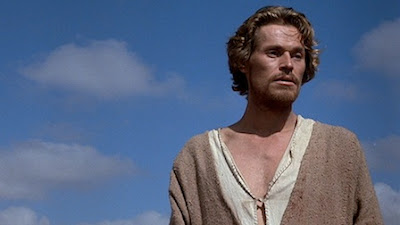 He was not willing to compromise by accepting the Messiahship and resorting to violence nor was he willing to tailor his words to suit the authorities (if it was not already too late for that). The only alternative was to die. In these circumstances death was the only way of continuing to serve humankind, the only way of speaking to the world (Jn 7:1–4), the only way of witnessing to the “kingdom.” Deeds speak louder than words but death speaks louder than deeds. Jesus died so that the “kingdom” might come.

. . . The evidence does not allow us to decide to what extent Jesus foresaw the detailed circumstances of his death. Would his disciples be arrested or he alone? Several authors have maintained tat Jesus spoke as if he expected (or at least did not exclude the possibility) that he and his disciples would be executed together. Would he be stoned or crucified, that is to say, would he be executed by the Sanhedrin or by Pilate? Would they arrest him during the festival or after it? Would he have much of an opportunity to preach in the Temple before they caught him?

Perhaps he did foresee some of the details. He certainly seems to have suspected that Judas would inform on him. But in none of these cases is it necessary for us to resort to explanations based upon divine foreknowledge or special revelations about future events. The parables alone would suffice to show us what a clear insight Jesus had into the motives of people and how well he could predict what they were likely to do and say. 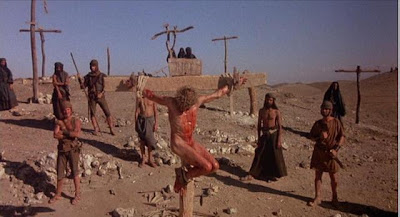 Yeah, well it affected me. It broke my heart because I think that it's a beautiful film and I know the spirit we made it in and in a world where you have very cynical, crass slasher movies and stuff like that, it blew my mind that somebody makes a movie about love, forgiveness, about this incredibly revolutionary character and people get nervous, but clearly then, and in retrospect, it was a political thing. The religious Right used, I don't think they even knew what the movie was, but they used the opportunity as a chance to scare people and to galvanize their political agenda. It's very clear. From a Catholic point of view, it's a very Catholic movie and there was some artistic licenses taken sometimes, but we have to do these things sometimes to make sure people are still listening.