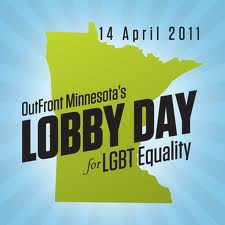 I'll be there bright and early co-presenting a workshop on "Speaking from Faith for Marriage Equality." In particular, I'll be sharing "tips" on speaking as a Catholic in support of same-sex marriage.

OutFront's annual Lobby Day always includes a wonderfully spirited rally at noon, followed by an afternoon of visits to legislators. If you're a Minnesota resident, I hope you'll join the thousands of us who will be rallying and lobbying tomorrow at the Capitol for marriage equality.

There are thousands of reasons to attend OutFront Minnesota’s Lobby Day, but we’ve put together 10 that will hopefully persuade you to take an hour or two on Thursday to make a difference for LGBT equality. Meetings with legislators are all day on Thursday and the rally begins at noon on the Capitol lawn.

10. 2010 brought about the first anti-LGBT Legislature in nearly 40 years and Thursday’s event will be the most important ever. And if you cannot make to Lobby Day, consider attending the kick off party the night before.

9. Lori and Jeff Wilfahrt, parents of Cpl. Andrew Wilfahrt, will address the rally and observe a moment of silence for their fallen son and for all Minnesotans who gave their lives for our country. Wilfahrt is the first known LGBT soldier from Minnesota killed in the line of duty during the war in Afghanistan.

8. The good guys need to hear from you. Even if they fully support LGBT equality, they need to hear your support, your thanks, and most importantly your stories so they can take them to their friends and colleagues who may not be fully in support of LGBT equality. Be sure to sign up before Thursday to meet with your legislators.

7. Equality opponents need to hear from you. Minds can be changed. Legislators that do not support LGBT equality might not understand how inequality impacts people in their district. Be sure to sign up before Thursday to meet with your legislators.

5. Minnesota voters need to know that there are hundreds of thousands of supporters of the LGBT community. If Twin Cities Pride can rally 500,000 people for beer, corporate tchotchkes, great entertainment and a fabulous parade, surely that many can take an hour off of work to demonstrate for LGBT rights.

4. A constitutional amendment to the Minnesota Constitution to ban same-sex marriage and civil unions is likely to be introduced by lawmakers in 2011 or 2012, and there’s nothing Gov. Mark Dayton can do to stop it. Lawmakers need to know that Minnesotans will not allow hate in the state constitution. Help stop the Minnesota version of Prop 8!

3. It’s a great looking crowd. People who advocate for LGBT equality are statistically more attractive than those who remain apathetic.*

2. You might find an anti-gay legislator crouched in the bushes.

1. Gov. Mark Dayton will be the first sitting governor to ever address the crowd at OutFront’s Lobby Day.

This year it is as important as ever to get involved in the movement for full LGBT equality. We hope to see you there!

(* According to an unscientific poll of TheColu.mn staff and their friends.)