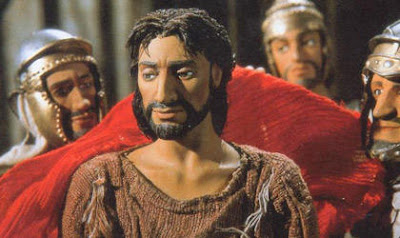 This excerpt is accompanied by images from Derek Hayes and Stanislav Sokolov's The Miracle Maker: The Story of Jesus, a stop motion and animated film about the life of Jesus as told by Tamar, the young daughter of Jairus, who is raised from death by Jesus. Ralph Fiennes voices Jesus.


It was the Romans . . . who wanted to destroy Jesus. Whether they had found out about Jesus themselves and wanted an extradition, or whether they were told about him by Caiaphas after the deliberations of the council, remains uncertain. That they should have wanted to destroy Jesus is fully in accord with the known policy of Pilate and other procurators. They destroyed all prophets and potential Messiahs.

The Jewish authorities, for whatever reasons, decided to find Jesus and hand him over to Pilate. The accusation which we must make against them is that they betrayed Jesus. To hand over and to betray are the same word in Greek: paradidomai (Mk 31 parr; 10:33, 34 parr; 14:41 par; 15:1 par; Mt 26:2; Jn 19:11; Acts 7:52). There were therefore two betrayals: Judas betrayed him (handed him over) to the Jewish authorities and they in turn betrayed him (handed him over) to the Romans (Mk 10:33–34 parr). He was then tried and sentenced to death by a Roman court.

The suffering servant in Isaiah 53:7 was silent before his accusers – like a lamb before its shearers. It cannot be argued from this that the gospel writers or their sources invented the idea of Jesus’ silence in order to point out that Jesus was the suffering servant. Remaining silent before his accusers is exactly what we might expect Jesus to do. He had consistently refused to produce signs from heaven; he had never argued from authority; he had refused to answer questions about his own authority; and now he refused to defend or justify his behavior.

In other words, Jesus stood there without a word, putting everyone else to the test. The truth of the matter is that it was not Jesus who was on trial. His betrayers and accusers were on trial before him. His silence puzzled, disturbed, questioned and tested them. Their words were turned back at them and they condemned themselves out of their own mouths. 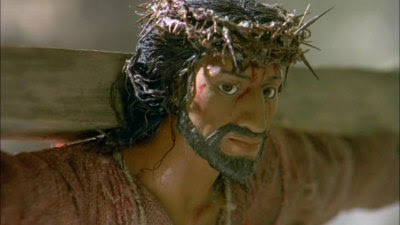 Images: Stills from the 2000 film The Miracle Maker: The Story of Jesus.

In an effort to bring a different storytelling angle . . . The Miracle Maker: The Story of Jesus tells the oft-told Easter story of Jesus (Ralph Fiennes) meeting his [death] and resurrection, through the framing story of Tamar, the young girl who is deathly ill until her father, Jairus (William Hurt) seeks Jesus' help. An effort has been made in the script to present the story in the plainest of terms, with characters speaking in unadulterated English, with little or no flowery prose associated with most religious epics. Realism seems to be goal of the film, with the claymation figures modeled as closely as possible on the actual human form, and their dialogue written in an easy and accessible style.

. . . There's . . . enough in The Miracle Maker: The Story of Jesus to make it worth your while to check out this Easter. The claymation process, although hardly as realistic as the makers would have you believe, is masterfully caught in the big-screen-like camera dollies and trucking shots that distinguish them from other claymation films. They may be dolls up there on the screen, but the camera treats them like big name actors in a big-budget film, so The Miracle Maker: The Story of Jesus has a realism of camera movement that goes a long way towards keeping our interest. The cell animation scenes, as well, are gorgeous to look at, and are recommended despite their relative brevity. And finally, maybe you're just tired of watching the same Easter movies . . . The Miracle Maker: The Story of Jesus just might be the new Easter title that grabs your family's interest this season.

NEXT: And What of Resurrection?