The Passion of Christ (Part 12)

NOTE: This is the last post of this series. To start at the beginning of the Passion of Christ series, click, here.

Jesus Appears to His Friends
By Doug Blanchard 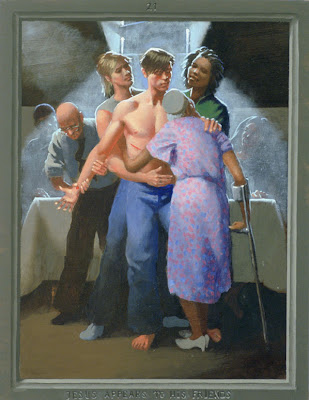 Not Metaphor, Not Guilty Revision
. . . But Something Else
An excerpt from Paula Fredriksen’s article
“What You See Is What You Get:
Context and Content in Current Research on the Historical Jesus”
(Theology Today, Vol 52, N0. 1, April1995)
I honor [scholar John Dominic Crossan’s] kind of effort [in works such as Jesus: A Revolutionary Biography]. It takes a stand for divine consistency and against “historical malfeasance” (Crossan’s excellent phrase). Treating supernatural claims as historical data is cheating, unless we are willing to honor all supernatural claims as historical. So Crossan translates these claims into more rational terms: metaphor, guilty revision. Whether such translations are persuasive is another issue. Jesus’ healing miracles and exorcisms can, of course, be explained in other ways, such as by an appeal to psychosomatic healing, auto-suggestion, and other such phenomena we are familiar with today. I incline to see Jesus as that kind of healer, rather than as someone who regards disease as a social metaphor but changes nothing. For one thing, I doubt many afflicted peasants would have flocked to him for a cure and returned home satisfied with a hug.

But the resurrection is something else. The movement stands or falls with it, and I cannot imagine so many people in the first generation changing their lives so radically without taking them at their word. They were convinced that Jesus had risen from the dead. If they just thought that he had died but his truth/went marching on, they could have said that. But they didn’t; they spoke of resurrection. Please read me correctly: I am not saying that Jesus really rose from the dead because his disciples said that he did. I am saying that they really thought he had. 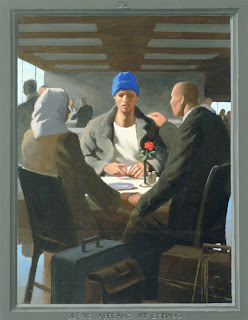 Crossan’s dogs [consuming the corpse of Jesus] account for the empty tomb. It’s a gripping, horrifying, and powerful image. The resurrection stories as a kind of creative aphasia, however, I find much less compelling. “Those who had originally experienced divine power through his vision and his example continued to do so after his death. . . . They talked eventually not just of continued affection . . . but of resurrection. They tried to express what they meant by telling” stories such as the supper at Emmaus. Its “symbolism is obvious, as is the metaphoric condensation of the first years of Christian thought and practice into one parabolic afternoon.” Incapable, for whatever reasons, of saying simply “Jesus died, but I still believe and live according to what he died for,” the early community constructed narrative metaphors whose import was exclusively existential, not historical. “Emmaus never happened. Emmaus always happens.” (Crossan, Jesus: A Revolutionary Biography, p. 197).

The Jesus in Love Blog just began a series based on these same paintings by Douglas Blanchard. I wrote short reflections specifically to go with each of the 24 paintings.

I didn’t know about this series until today, so my text was created completely independently of yours. I just discovered this series today through the Queering the Church Blog, and I look forward to reading it in more depth.

I see that you struggled, as I did, with how to incorporate the first painting (Son of Man with Job and Isaiah) and the last few paintings with post-resurrection visions of the Holy Spirit. I hope that you will appreciate my treatment of these paintings.

For Part 1 of our series on “The Passion of Christ: A Gay Vision,” visit this link:
http://jesusinlove.blogspot.com/2011/04/gay-passion-of-christ-series-runs.html

I’m getting some good ideas from your blog about formatting. I love the way that you include a list of all past parts at the end of each post. I will try adding that feature to my version.

May God bless you abundantly this Lent and Holy Week!

I'm so happy to hear that you're highlighting Doug Blanchard's beautiful artwork at Jesus in Love.

And that's great that you're going to accompany each piece with your own writing as you're a very gifted writer.

I definitely look forward to following the series.