The Passion of Christ (Part 3) 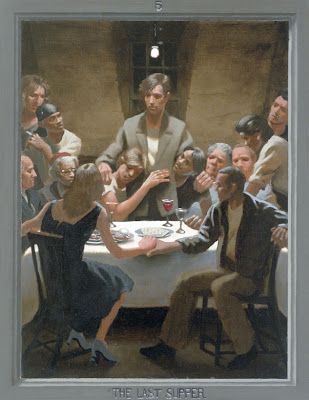 Open Commensality
In his book Jesus: A Revolutionary Biography, John Dominic Crossan discusses the “open commensality” of Jesus’ vision of the Kingdom of God. The starting point for this discussion is a key parable that Jesus tells. As Crossan notes, this particular parable is “found in the Q Gospel, but with widely divergent versions in Matthew 22:1-13 and Luke 14:15-24. It is also found in the Gospel of Thomas 64.”

Crossan explains how this parable “tells the story of a person who gives a presumably unannounced feast, sends a servant to invite friends, but finds by late day that each has a quite valid reason and very politely expressed excuse. The result is a dinner ready and a room empty. The host replaces the absent guests with anyone off the streets.”

The end result of such a gathering? Well, as Crossan observes:

If one actually brought in anyone off the street, one could, in such a situation, have classes, sexes, and ranks all mixed up together. Anyone could be reclining next to anyone else, female next to male, free next to slave, socially high next to socially low, and ritually pure next to ritually impure. And a short detour through the cross-cultural anthropology of food and eating underlines what a societal nightmare that would be. . . . [And remember, meals in Jesus’ time were] not just [events] of eating together, of simple table fellowship, but what anthropologists call “commensality” – from “mensa,” the Latin word for “table.” It means the rules of tabling and eating as miniature models for the rules of association and socialization. It means table fellowship as a map of economic discrimination, social hierarchy, and political differentiation.

What Jesus’ parable advocates, therefore, is an open commensality, an eating together without using table as a miniature map of society’s vertical discriminations and lateral separations. The social challenge of such equal and egalitarian commensality is the parable’s most fundamental danger and most radical threat. It is only a story, of course, but it is one that focuses its egalitarian challenge on society’s miniature mirror, the table, as the place where bodies meet to eat.

Since, moreover, Jesus lived out his own parable, the almost predictable counter-accusation to such open commensality would be immediate: Jesus is a glutton, a drunkard, and a friend of tax collectors and sinners. He makes, in other words, no appropriate distinctions and discriminations. And since women were present, especially unmarried women, the accusation would be that Jesus eats with whores, the standard epithet of denigration for any female outside appropriate male control. All of those terms – tax collectors, sinners, whores – are in this case derogatory terms for those with whom, in the opinion of the name callers, open and free association should be avoided.

And what of the “Last Supper”? Was this too an embodiment of Jesus’ radical open commensality? Here’s what Crossen says:

Did Jesus, before his death, institute a new Passover meal in which his martyrdom with its separation of body and blood was symbolized by the meal with its separation of bread and wine? On the one hand, Paul certainly knows about such an institution in 1 Corinthians 11:23-25. But, on the hand, John 13-17 has a last supper with Jesus and his disciples that is neither the Passover meal nor any type of institutionalized symbolic commemoration of his death. Neither the Gospel of Thomas nor the Q Gospel exhibits any awareness of a Last Supper tradition. Finally, the case of Didache 9-10 is especially significant. It describes a communal and ritual eating together, from the second half of the first century, with absolutely no hint of Passover meal, Last Supper, or passion symbolism built into its origins or development. I cannot believe that those specific Christians knew all about those elements and yet studiously avoided them. I can only presume that those elements were not there for everyone from the beginning – that is, from solemn, formal, and final institution by Jesus himself.

What Jesus created and left behind was the tradition of open commensality seen so often earlier, and what happened was that, after his death, certain Christian groups created the Last Supper as a ritual that combined that commensality from his life with a commemoration of his death. It spread to other Christian groups only slowly. It cannot be used as a historical event to explain anything about Jesus’ own death.

NEXT: The Passion of Christ (Part 4)