The Passion of Christ (Part 7)

Jesus Goes to His Execution
By Doug Blanchard 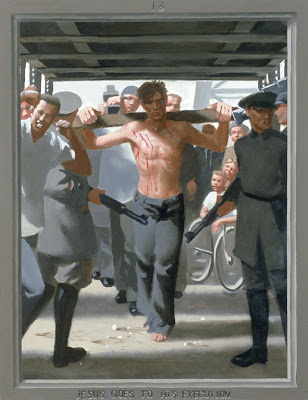 In April 2000 I traveled from the Twin Cities to Washington, D.C. to participate in a range of rallies, demonstrations, and teach-ins aimed at protesting the structure and policies of both the World Bank and the International Monetary Fund (IMF) – two organizations that, along with the World Trade Organization (WTO), are the key architects of the corporate global economy.

Collectively, the various events in Washington, D.C. of April 2000 were termed A16 – a reference to April 16, the main day of protest. A16 brought 15,000 people onto the streets of the capital and, like the protests in Seattle against the WTO in November 1999, united a range of people – environmentalists, union members, students, religious people, peace activists, and individuals representing organizations from those countries most devastated by the unjust policies of the World Bank and IMF.

By far the most powerful event I was part of was the “Economic Way of the Cross” on Monday, April 10, 2000. Organized by the Religious Working Group on the World Bank and IMF, a coalition of over forty religious organizations, the Economic Way of the Cross was a prayerful procession through the streets of downtown Washington, D.C. The event sought to draw attention to the policies and practices of various corporate and governmental institutions that devastate the lives of millions of people throughout the world. The Christian underpinnings of the event reflect the theological understanding of Christ being continually crucified while ever people and other aspects of creation experience suffering and death as a result of oppressive structures of power.

“The Economic Way of the Cross invites people of faith to relate prayerfully the Passion of Jesus Christ to the suffering of women, men and children throughout the world today,” noted key organizer Anne Pettifor. “Often, this suffering is the result of unjust economic relationships, what we call social, or structural sin.” 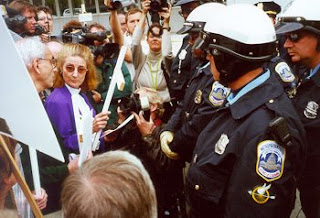 NEXT: The Passion of Christ (Part 8)

Image 1: “Jesus Goes to His Execution” – Doug Blanchard (The Passion of Christ).
Images 2-5: Michael Bayly. (From Part 3 of Gallery 3 of the online photographic exhibit Faces of Resistance: Images and Stories of Progressive Activism at the Turn of the Millennium - 1997-2006.)