Catholic and Gay in the UK 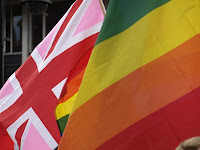 I’ve decided that during this first week of the Easter season I will highlight and share various thoughts and commentaries that are especially hopeful to LGBT Catholics.

Of course, I like to think that The Wild Reed is, at any given time, a place of positivity, pro-activism and hope. Nevertheless, I think it’s good to take the time to be intentional about seeking and sharing particular examples of hope, especially in these current challenging times.

Martin Pendergast’s commentary published in the April 10 issue of the British newspaper The Guardian is certainly hopeful and positive in its tone and message.

Entitled “Proudly Gay and Proudly Catholic,” Pendergast’s commentary begins by documenting the “positive grassroots story” of the Soho masses LGBT community before offering a highly accessible and illuminating overview of the history of the “official” (and flawed) Roman Catholic Church’s teaching on homosexuality.

I particularly appreciate Pendergast’s reflection on the levels of Church teaching. He notes, for instance, that: “Third level Catholic teachings, such as those dealing with human sexuality, have to be discerned in the light of faith-filled experience and human knowledge, reflected upon in that deep place of conscience, where the believer can know God, and then received as good and true.”

It concludes with the hopeful observation that, despite the homo-negativity of official Church teaching, “the acceptance, not just toleration, of [Catholic’s] LGBT sisters and brothers, sons and daughters, is increasingly clear to see in parishes and families around the country.”

Following is an extended excerpt from Pendergast’s commentary.


The [Roman Catholic] church worldwide still fails to dialogue formally with its LGBT members. Official statements reflect harsh judgments, uninformed either by increasing knowledge about human sexual diversity, or Catholic theological pluralism. The pastoral practice on the ground varies enormously. LGBT pastoral ministries operate with differing degrees of hierarchical support. The Catholic church reflects the kind of divisions seen in the Anglican Communion over the issue of homosexuality, with some Bishops formally recognising only those groups which advocate celibacy.

Those viewing Catholicism from afar can be forgiven for assuming that the church has held its views on homosexuality for centuries. In fact, it only began to detail this teaching in a 1976 Declaration on Sexual Ethics, through the Vatican’s Congregation for the Doctrine of the Faith, then headed by the present Pope. This coined an untraditional Catholic term, “intrinsic disorder” to describe homosexuality, applying an intricate philosophical term to a complex human and theological reality.

Successive Roman documents have embroidered this offensive and confusing vocabulary to the present day. The Vatican becomes more and more isolated from other parts of the church in theological reflection and pastoral practise. It has ratcheted up its rhetoric, forcing bishops to defend the indefensible, whether with regard to admission of candidates to seminaries or religious communities, same-sex marriage and civil unions, or same-sex couples ability to foster or adopt children.

Roman Catholic teaching on homosexuality highlights some of Catholicism’s best kept secrets: the primacy of a fully informed personal conscience, the hierarchy of truths, and the development of doctrine. The Catholic Bishops of England and Wales rose to these challenges when they authorised the publication of “An Introduction to the Pastoral Care of Homosexual People” in 1979.

These guidelines stayed faithful to Catholic teaching that sexual activity is only admissible within marriage, but stated that both homosexual orientation and heterosexual orientations are morally neutral. This underscores the Vatican position that the orientation in itself is not sinful, but moral decisions relate to how that orientation is expressed sexually. Whereas the Vatican would go no further in the discussion, the local Pastoral Care guidelines encouraged clergy to adopt a more nuanced approach when faced with two people in a permanent, faithful relationship who choose to exercise their rights of conscience. The Vatican was not pleased with this liberal interpretation.

Recognising that LGBT Catholics have the same rights to the sacraments as straight Catholics and should not be automatically excluded, the guidelines also strongly denounced prejudice and discrimination: “As a group that has suffered more than its share of oppression and contempt, the homosexual community has a particular claim upon the concern of the church.” The late Cardinal Hume went further, trying to interpret in acceptable language the Vatican’s discordant tones: “Homophobia should have no place among Catholics. Catholic teaching on homosexuality is not founded on, and can never be used to justify homophobic attitudes.”

The Vatican has made it clear that its tenets on homosexuality are not first level in the order of Catholic teachings. As such, Catholics hear what the church’s teaching authority has to say, but neither the Vatican nor the pope is an oracle, in the presence of which Catholics cast aside human capacity, and fall to their knees in irrational submission. Third level Catholic teachings, such as those dealing with human sexuality, have to be discerned in the light of faith-filled experience and human knowledge, reflected upon in that deep place of conscience, where the believer can know God, and then received as good and true.

With official teaching on homosexuality only being spelled out since 1976, it is easy to see the development of doctrine in practise. Even though doctrine is not determined by opinion polls, numerous surveys show younger generations, and not just the young, challenging these areas of church teaching. The inclusive community of straight and 90% LGBT Catholics who gather twice a month in Soho, don’t argue about finer points of theology relating either to homosexuality, contraception, or divorce. The acceptance, not just toleration, of their LGBT sisters and brothers, sons and daughters, is increasingly clear to see in parishes and families around the country.

To read Martin Pendergast in its entirety, click here.


See also the previous Wild Reed posts:
A Catholic Rebellion?
How Times Have Changed
The Catholic Church and Gays: An Excellent Historical Overview
Catholic Teaching on Homosexuality: Complex and Nuanced
The Standard for Sexual Ethics: Human Flourishing, Mot Openness to Procreation
Relationship: The Crucial Factor in Sexual Morality
The Pope’s “Scandalous” Stance on Homosexuality
And a Merry Christmas to You Too, Papa
The Vatican’s Actions at the UN: “Sickening, Depraved, and Shameless”
Compassion, Christian Community, and Homosexuality
Celebrating Our Sanctifying Truth
Our Catholic “Stonewall Moment”
A Catholic Presence at Gay Pride
Reflections on the Primacy of Conscience
The Question of an “Informed” Catholic Conscience
A Catholic Understanding of Faithful Dissent (Part 1)
A Catholic Understanding of Faithful Dissent (Part 2)
Posted by Michael J. Bayly at 1:02 PM

Official teaching on homosexuality was surely only spelled out then because the very concept of fixed sexual identity only really started to evolve in the late 19th and 20th centuries (and the Church is slow)?

It's not like before that she was shy about condemning buggary.
And all that is mean't by "intrinsic disorder" is "has a strong inclination to engage in buggary which we have always condemned".

So all in all I find that argument rather disingenuous.

Kleinzeit3, the Church has also never been shy about hiding and denying the sexual abuses of it's celibate clergy. Seems to me the language "intrinsic disorder" is either a self descriptor or a bad case of projection.

colkoch, I am not sure how that actually relates to this particular issue.