The Passion of Christ (Part 5)

Jesus Before the People
By Doug Blanchard 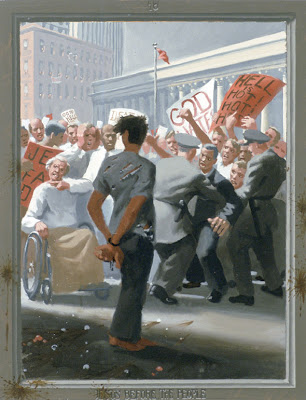 Homosexual
By Francis Webb
To watch may be deadly. There is no judgment, compulsion,
and the object becomes ourselves. That is the terror:
we have simply ceased, are not dead, and have been
and are; only movement – our movement – is relegated,
only thought, being – our thought, being – are given
over; and pray God it be simply given.
So, at this man’s ending, which is all a watching,
let us disentangle the disgust and indifference,
be all a thin hurried magnanimity:
for that is movement, our movement. Let us study
popular magazines, digests, psychoanalysts:
for that is thought, being, our thought, our being.

I shall only watch. He is born, seized by joy,
I shall not speak of that joy, seeing it only
as the lighted house, the security, the Beginning.
Unselfconscious as the loveliest of flowers
he grows – and here we enter: the house stands yet,
but the joists whinge under our footsteps. Now the God,
the Beginning, the joy, give way to boots and footmarks.
Pale glass faces contorted in hate or merriment
embody him; and words and arbitrary laws.
He is embodied, he weeps – and all mankind,
which is the face, the glass even, weeps with him.

The first window broken. Something nameless as yet
resists embodiment. Something, the perennial rebel.
Will not rest. And this, his greatest element,
becomes his terror, because of the footsteps, us.
I shall not consider sin beginning, our sin,
the images, furtive actions. All is a secret
but to us all is known as on the day of our birth.
He will differ, must differ among all the pale glass faces,
the single face contorted in hate or merriment.

Comes the day when his mother realizes all.
Few questions, and a chaos of silence. Her thin eyes
are emptied. Doors rattle in the house,
foundations stagger. The Beginning becomes us;
and he is mulcted of words, remain to him only
the words of sin, escape, which is becoming all of life.
Easier the talk with his father, rowdy, brief
thank God, and only the language of the gutter,
he watches the moth pondering the gaslight, love-death,
offers a wager as to her love or death or both.
His father stops speaking, fingers some papers on the desk.

And now he is here. We had him conveyed to this place
because our pale glass faces contorted in hate or merriment
left only sin as flesh, the concrete, the demanded:
he does not speak or hear – perhaps the pox.
But all his compatriots in sin or in other illness
are flesh, the demanded, silent, watching, not hearing:
it is all he ever sought. Again I am tempted, with the Great,
to see in ugliness and agony a way to God:
worse, I am tempted to say he has found God
because we cannot contort our faces in merriment,
and we are one of the Twelve Tribes – he is our king.
He has dictated silence, a kind of peace
to all within these four unambiguous walls,
almost I can say with no answering scuffle of rejection,
he is loving us now, he is loving all.

In his 2000 book Who Is Worthy? The Role of Conscience in Restoring Hope to the Church, the late Fr. Ted Kennedy declared Francis Webb’s poem “Homosexual” a classic work of Australian literature.

It’s a poem, says Kennedy, that “carries the pain and the poignancy” of a Catholic Australian boy becoming aware of his homosexuality and thus confronting not only gibes and jests but the prospect of violence and death. Yet he chooses to respond to such “ugliness and agony” in a way that serves as a path to God. The ugly ignorance and hatefulness heaped upon him by those who scorn and reject him does not make him hateful – but rather loving of all.

It was a path chosen and modeled by the Spirit-infused Jesus when he stood “before the people” - before those individuals and groups whose interests were challenged and threatened by his life and message of radical inclusion, and who, as a result, wanted to see Jesus dead. It doesn’t end there, of course, as it is clear to all who are open to the Spirit present and active in our world, that this path continues to be chosen and modeled today whenever, for example, gay people stand in awareness and conviction of their loving lives and relationships in the face of the myriad forms of discrimination, hostility, and abuse that are meted out by both church and society.


NEXT: The Passion of Christ (Part 6)

Image: “Jesus Before the People” - Doug Blanchard (The Passion of Christ).

Thanks Michael for sharing this beautiful poem by Francis web. It gives me a completely new, yet somehow already understood, outlook on being gay.

To be gay, and to come out is ultimately to respond to God, as Fr. Kennedy put it, it's to respond and to bless His glory. The glory He bestowed upon us and He deigned to create us with such a unique and different orientation. I think that gay people should begin to think of their orientations as blessings, blessings because they're not like the millions of other mundane, heterosexual individuals who populate the planet. They're, a new creation, a gift from Almighty to planet earth! Perhaps if more within the homosexual community looked at our orientation in this Providential way, religion wouldn't be so frowned upon as it currently is, although I do sincerely understand why. It's just unfortunate...

But anyway, Fr. Kennedy's reflections and remarks give me a reason to add his book to my list of "books to read!" Thanks, and continue steadfastly in your ministry! As we saw from the news in Vermont today, HOPE continues to triumph! And I do believe, eventually, it will within our Church.

Thanks for your wonderful comment. I also look forward to hearing from you on this forum as your words and ideas are always so insightful, well-articulated, and hopeful. Thanks for that.