The Passion of Christ (Part 10)

Jesus Among the Dead
By Doug Blanchard 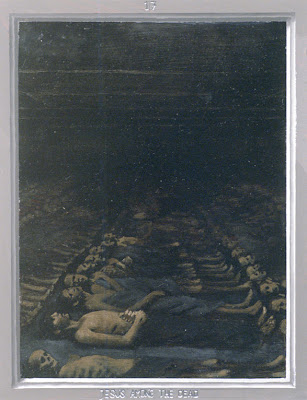 No Splendor, No Glory

An excerpt from Putting Away Childish Things
by Uta Ranke-Heinemann
(English translation: New York: HarperCollins, 1994)
Jesus was executed with two others, the so-called robbers, who presumably were executed, like Jesus, for political reasons. Hence, we may assume, first, that all three were condemned in one and the same trial, and that, second, all three were buried in the same mass grave.

It is characteristic that according to all four Gospels, Jesus was buried neither by his family nor by his disciples (though in the Synoptics a few women witness his burial: Matt. 27:61; Mark 15:47; Luke 23:55). Instead, he was buried by a third party, a point that the description of the burial still clearly remembers. But it wasn’t two rich and pious men [Joseph of Arimathea and Nicodemus] who buried him – why should his family and his friends have stayed away from [such a] burial? It was the Romans who buried him in a mass grave. And with the large number of the graves, which were immediately flattened, no one could say anymore where it was.

There was no splendor and glory hovering over Jesus’ burial. There were no hundred pounds of myrrh and aloes. After the most wretched and ignominious of all deaths, it was presumably the most miserable and wretched of all burials.

Image: “Jesus Among the Dead” – Doug Blanchard (The Passion of Christ).