The Passion of Christ (Part 1) 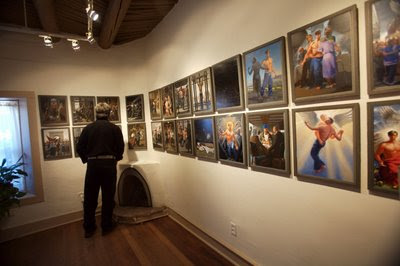 Says Blanchard of his work:

I am not interested in the literal history of the death of Jesus. As far as I’m concerned, the historical Jesus of Nazareth is an irretrievably alien figure to us, inhabiting a world that no longer exists, speaking a language almost no one speaks anymore.

I am much more interested in the story. What does that story mean to us now? What is it about the death of Jesus that remains so remarkable among the deaths of thousands and thousands of other innocent young men unjustly condemned throughout history? Why should this death be remarkable in light of everyone’s death? 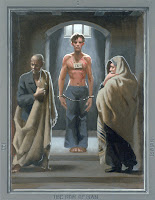 I hope to present in this series a more humane and radically transformative vision of Christianity. In the story of the death and resurrection of Christ, the whole grim arithmetic of power and powerlessness, by which the world has always worked is pitched out of the window. It is that profoundly egalitarian and anarchist aspect of Christianity that keeps me with it; the idea that love is the great monkey-wrench thrown into the smooth workings of our ambitions and designs for power. It is through love that we transcend history Through love, we transcend death.

That is the religious vision I hope to present in this series.

Blanchard dedicates The Passion of Christ series to Barbara Crafton (pictured at left), former rector of St. Clement’s Episcopal Church in New York City. “She has helped me, and numerous other people, through many rough spots,” says Blanchard. “Her generosity in deed and spirit makes her an exemplary Christian.”

NOTE: Each post in this series will be accompanied by one or more reflections related to the scene/s of Jesus’ Passion depicted by Blanchard. Please be aware that these reflections are chosen by me, and are not part of Blanchard’s original series nor necessarily reflect his theological perspective. Rather, they reflect my own. For instance, as you’ll see from some of the writings I have chosen to accompany Blanchard’s art, I am interested in the historical Jesus, and do not consider him an “irretrievably alien figure.” Furthermore I consider perspectives on the “Jesus of history” to compliment (perhaps even enhance) those works – be they academic or artistic – that focus on the “Christ of faith.” For me, they are two sides of the same coin. They are intrinsically related. Both are important; both are needed. Indeed, I question if one can have either a dogmatic and/or visionary sense of Christ without some sense of Jesus’ place and role in history. 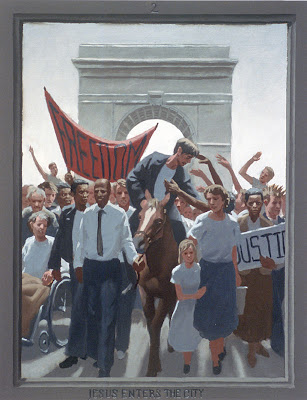 What Can Be Said About the Historical Jesus?
In his 1997 book, The God We Never Knew: Beyond Dogmatic Religion to a More Authentic Contemporary Faith, Marcus J. Borg reflects on the “pre-Easter Jesus” and addresses the question: “What gestalt of Jesus – what overall sketch – best accounts for what we find in the earliest layers of the developing gospel tradition?”

Borg then shares the following “five-stroke sketch of Jesus,” one that reflects his cross-cultural approach to the study of religion in general and of Jesus and Christian origins in particular. “Each stroke,” he writes, “is a religious personality type known in many religious traditions. . . . This approach, it seems to me, produces a reasonably comprehensive gestalt of the historical Jesus.

1. Jesus was a “Spirit person” – [Borg’s] phrase for a person who has frequent and vivid experiences of the sacred, of God, of the Spirit. He is similar to other Spirit persons in the Jewish tradition, for whom the sacred was an experiential reality: Moses, Elijah, the prophets. This seems to [Borg] the foundation to everything else he was.

2. Jesus was a healer. The evidence that he performed paranormal healings (as some Spirit persons do) is very strong. More healing stories are told about him than about any other figure in the Jewish tradition.

3. Jesus was a wisdom teacher. Using provocative short sayings (aphorisms) and memorable stories (parables), Jesus (like Lao-tzu, the Buddha, and Socrates, though in a very different style) taught enlightenment wisdom flowing out of his experience of the sacred. Jesus spoke differently because he had seen differently. 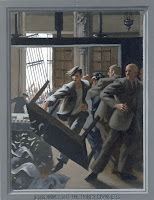 4. Jesus was a social prophet. Like the God-intoxicated social prophets of the Hebrew Bible (Amos, Micah, Jeremiah, and so on) he challenged the domination system of his day, an oppressive social order with sharp social boundaries ruled over by a small class of urban elites. Moreover, he had an alternative social vision grounded in the compassion of God. 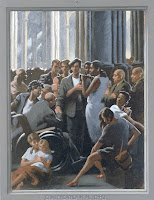 5. Finally, Jesus was a movement initiator. A movement (at least in embryonic form – his public activity was very brief) came into existence around him during his lifetime whose inclusiveness and egalitarian practice embodied his alternative social vision.


NEXT: The Passion of Christ (Part 2)


See also the previous Wild Reed posts:
Why Jesus is My Man
Palm Sunday: “A Planned Political Demonstration”
The “Incident” in the Temple
Pasolini’s “Wrathful Christ”
The Sexuality of Jesus

An Armani suit cloaking a gym-toned body (a body formed by physical labor would not be as refined, especially in skin tone) is not radically transformative in a challenging way to our world....

With all respect, Liam, I think your comment reveals more about you and the way you choose to see the world than it does about Blanchard's art.

Blanchard's work is very well done, thoughtful and provocative. You find the best artists Michael. Thanks.