The Passion of Christ (Part 9) 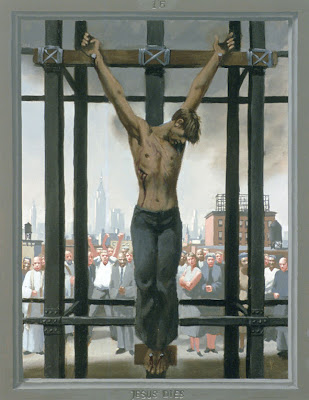 An excerpt from The Last Week: What the Gospels Really Teach
About Jesus’ Final Days in Jerusalem
by Marcus J. Borg and John Dominic Crossan
(Harper San Francisco, 2006, p. 161)
Was Jesus’ death the will of God? No. It is never the will of God that a righteous man be crucified. Did it have to happen? It might have turned out differently. . . . But it did happen this way. And like the storyteller of Genesis, early Christian storytellers looking back on what did happen ascribe providential meanings to Good Friday. But this does not mean Good Friday had to happen.

But for another reason the execution of Jesus was virtually inevitable. Not because of divine necessity, but because of human inevitability - this is what domination systems [like the Roman empire] did to people who publicly and vigorously challenged them. It happened often in the ancient world. It has happened to countless people throughout history.

. . . But Jesus was not simply an unfortunate victim of a domination system’s brutality. He was also a protagonist filled with passion. His passion, his message, was about the kingdom of God. . . . [H]e challenged the authorities with public acts and public debates. All of this was his passion, what he was passionate about: God and the kingdom of God, God and God’s passion for justice.

I normally despise modern art. But I really like that.
It's right.
It's like the pictures from the renaissance where everyone is in contemporary clothing.