Toby Johnson on the Mysticism of Andrew Harvey 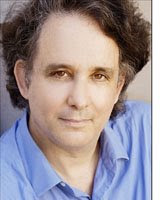 Earlier this week, as part of the Wild Reed’s ongoing Holy Week series highlighting the art of Doug Blanchard, I shared an excerpt from Son of Man: The Mystical Path to Christ by Andrew Harvey (pictured at right).

Following is an illuminating 1998 article by writer Toby Johnson (himself featured in the Wild Reed’s “In the Garden of Spirituality” series) that examines “the mysticism of Andrew Harvey” and reviews his book, Son of Man - one that Johnson notes is a “sensible, modern explication of the life and teachings of Jesus free of the usual self-serving spin the Christian Churches give the story.”

The Mysticism of Andrew Harvey
By Toby Johnson
White Crane
1998

In the Introduction to The Essential Gay Mystics, Andrew Harvey writes of the mystical experience as “a direct and naked perception of Godhead, beyond dogma, beyond ideas, beyond any possible formulation in words of any kind.” There is a tradition of such mystical seekers, Harvey says, and a surprisingly large number of them were gay. Surprising, he says, because nearly all the established religions condemn homosexuality and say that homosexuals are without spiritual life. In fact, as we know, the truth is diametrically opposite.

Harvey argues that the homophobia that generates this error is purely human and relatively recent, not of age-old divine ordination. And, indeed, this homophobia is destructive to religion. For it is part of the mindset that creates the polarization of male and female and deters most men and women from allowing themselves the so-called “mystical marriage” of male and female in the soul. Straight men, especially, resist allowing their feminine traits to develop. And we've ended up with a “male-centered, male-dominated, competitive, exploitative, war-and-power obsessed mentality.”

But there is a transformation underway -- a “birth into a wholly new cosmic consciousness” -- that is signified (and realized) by the return of the Sacred Feminine. The salvation of the human race depends on this transformation in which the intense polarizations of current human consciousness are transcended. Gay people demonstrate the blending of male and female traits and virtues. Perhaps more importantly, the struggle of gay people to end homophobia works to relax one of the major inhibitions human beings have to the merging of male and female. (Straight people are, after all, the most severely damaged by homophobia. Gay people work on themselves to get over it -- and sometimes achieve greatness of soul in the process. Straight people suffer without even knowing it, fearful of their sexuality and trapped in the polarizations, angry at gay people onto whom they project all their own discomfort and anxiety about sex.)

This transformation goes on at a mystical level. Harvey calls for seekers, gay and straight, to overcome homophobia and to practice a tantric sexuality that honors incarnation in flesh and celebrates -- and ritualizes -- the merging of male and female, body and spirit. The mystical practice radiates divine passion and divine energy and help propel the world toward ongoing transformation in the Divine Mother.

In his just released Son of Man: The Mystical Path to Christ, Harvey demonstrates the kind of work and world transformation he has called gay people to perform. Son of Man is not a gay book as such, but it clearly exemplifies the enlightened, mystical message that comes from the mystical marriage in the gay soul. For Son of Man is a sensible, modern explication of the life and teachings of Jesus free of the usual self-serving spin the Christian Churches give the story.

Choosing the term Jesus is said to have used for himself, “Son of Man,” not “Son of God,” Harvey presents Jesus as an accomplished mystical seeker who saw into the nature of Divinity and achieved miraculous healing abilities and yogic-like powers. Most of all, though, he saw into the human heart. He saw that the proper basis of morality was not obedience to Law but love and compassion. He was a revolutionary who called for a total overthrow of the social and religious culture of his day. He championed the plight of women in the face of rigid patriarchy. He dismissed riches as a sign of divine election. He ridiculed the priests and religious authorities. He called for a utopian world born from love of neighbor and mystical vision of the Kingdom.

Beyond calling for a reunderstanding and reclaiming of the story of Jesus, Harvey also calls for a reappreciation of the image of the Blessed Virgin Mary. Rather than being just a pious example of maternal asexuality, Mary is the manifestation in Christian tradition of the Sacred Feminine. Surprisingly, it is through her that Harvey says sacred sex should be practiced.

Andrew Harvey is a passionate spokesman for the mystical vision. His own personality manifests a fascination with the Transcendent Reality and the energy and obsession such a vision generates. His reassessment of Jesus and the Christian myth should be read by every gay man interested in spiritual vision.


See also the previous Wild Reed posts:
The Many Manifestations of God’s Loving Embrace
What Is It That Ails You?
Making Love, Giving Life
Somewhere In Between
Real Holiness
Sons of the Church: The Witnessing of Gay Catholic Men: A Discussion Guide
In the Garden of Spirituality: Toby Johnson