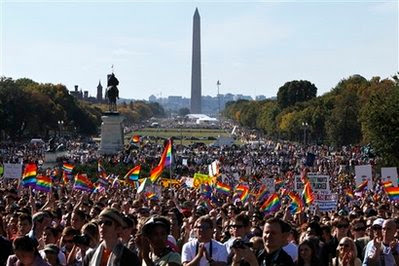 It was a big day in Washington, D.C., today as thousands marched and rallied for the civil rights of gay Americans.

Following are images from today’s National Equality March, along with an excerpt from the Associated Press’ coverage of this event.

By Brett Zongker
Associated Press
October 11, 2009
Tens of thousands of gay rights supporters marched Sunday from the White House to the Capitol, demanding that President Barack Obama keep his promises to allow gays to serve openly in the military and work to end discrimination against gays.

Rainbow flags and homemade signs dotted the crowds filling Pennsylvania Avenue in front of the White House as people chanted “Hey, Obama, let mama marry mama” and “We’re out, we’re proud, we won’t back down.” Many children were also among the protesters. A few counter-protesters had also joined the crowd, which stretched several blocks by the afternoon. 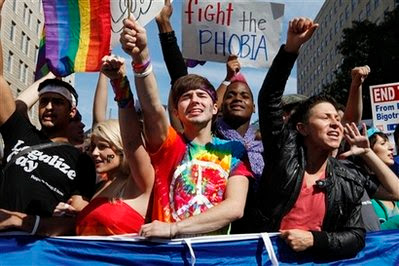 Above: Blake Jelley, 19, of Cincinnati, center,
and A.J. Weilmoth, 22, of Knoxville, Tenn., chant with thousands
of gay rights advocates at the start of the National Equality March
in Washington, D.C. - Sunday, October 11, 2009.
(AP Photo/Jacquelyn Martin)

Jason Yanowitz, a 37-year-old computer programmer from Chicago, held his daughter, 5-year-old Amira, on his shoulders. His partner, Annie, had their 2-year-old son, Isiah, in a stroller. Yanowitz said more straight people were turning out to show their support for gay rights.

“If somebody doesn’t have equal rights, then none of us are free,” he said. “For all I know, she’s gay or he’s gay,” he added, pointing to his children. 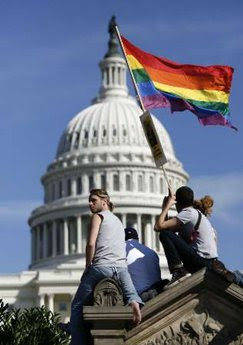 Above: People gather near the U.S. Capitol during the
National Equality March in Washington, D.C. - October 11, 2009.
(REUTERS/Molly Riley)

Keynote speaker Julian Bond, chairman of the NAACP, firmly linked the gay rights struggle to the Civil Rights movement, saying gays and lesbians should be free from discrimination. 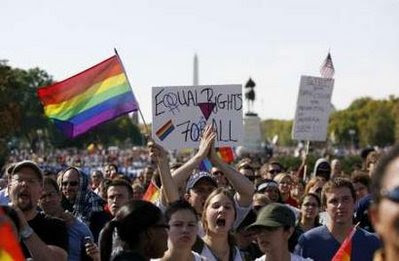 Some participants in the National Equality March woke up energized by Obama’s blunt pledge to end the ban on gays serving openly in the military during a speech to the nation’s largest gay rights group Saturday night.

The chairman of the Senate Armed Services Committee said Sunday that Congress will need to muster the resolve to change the “don't ask, don’t tell policy” — a change that the military may be ready for.

“I think it has to be done in the right way, which is to get a buy-in from the military, which I think is now possible,” said Sen. Carl Levin, D-Mich. 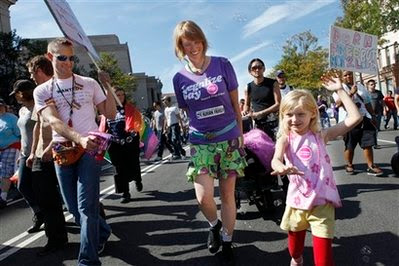 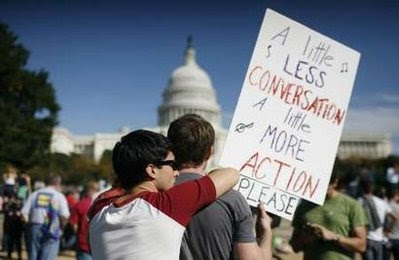 I was proud as a gay individual adn a Catholic to attend the National March for Equality in Washington D.C. this past weekend! It was a highly energizing, mobolizing, and peaceful gathering! I was profoundly moved to see so many people, not all of them LGBT oriented by the way, stand up for LGBT equality, particularly in the military and regarding marriage.

However, I was a bit dismayed to not see any religious organizations, at least that I could gather, present at this rally. This proves to show that so many progressive, inclusive Christians (and members of other religions of goodwill) are still a little afraid, perhaps intimidated, to voice their support for LGBT equality. Hopefully, in the future this trend will change for the better. I did see a glimmer of hope though. As my mother and I walked down Pennsylvania Ave. I saw a clergyman, in jeans and a cleric's collar. It looked like a priest's collar, I wasn't sure whether he was a Catholic priest, but nonetheless I was remarkably proud of him for taking a stand and not allowing religious arguments to stand in the way of his support for equality.

Thanks, Phillip, for sharing your experiences and thoughts on the National Equality March. I'm glad you got to be part of it!