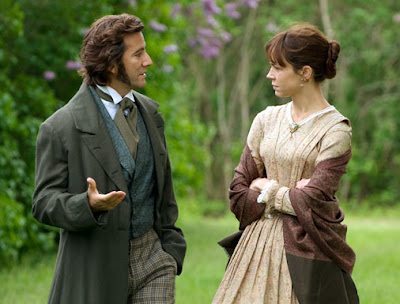 Recently I watched Darwin’s Darkest Hour an engaging drama on my local PBS station that explored why Charles Darwin purposely delayed coming out with his groundbreaking theory on the “progression of species.” It was a delay that went on for years and ended only after Darwin was threatened with having his theories preempted by another natural historian, Alfred Russel Wallace. 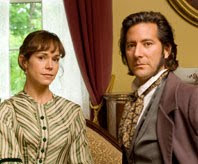 A joint production of National Geographic Television and NOVA, the dramatic retelling of these events is entitled Darwin’s Darkest Hour. The film is directed by John Bradshaw and stars Henry Ian Cusick as Charles Darwin and Frances O’Connor as his wife Emma. One aspect of the narrative I particularly appreciated was the numerous (and illuminating) flashbacks that compellingly depicted the development of Darwin’s challenging ideas.

I learned quite a lot from watching Darwin’s Darkest Hour. For example, I didn’t know Darwin’s father at first objected to his son’s passionate interest in natural history and the “folly” of his voyage of discovery aboard the HMS Beagle. He wanted Charles instead to be first a doctor and then a clergyman – a bishop, no less. And can you believe that throughout the five year duration of his voyage on the Beagle, Darwin suffered terribly from sea sickness! 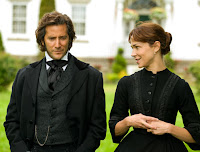 I also found the film’s depiction of Darwin’s relationship with his wife and children to be touching. Charles and Emma’s life together was truly one of the great love stories on the nineteenth century. They were also a couple who knew great personal tragedy in their family life. 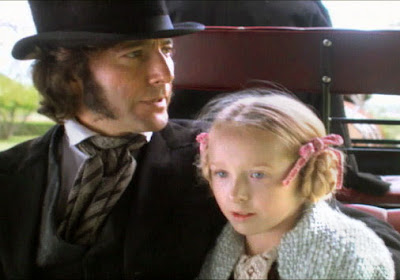 Above: Henry Ian Cusick as Charles Darwin
with his daughter Annie (played by Emily Power).

The central focus of the film, however, is Darwin’s awareness of how the things he discovered would be seen by many as an attack on religion and thus the entire moral order. Why? Because Darwin’s investigations into the transmutation of species, natural selection, and evolution threatened to totally overturn the traditional view of a created fixed order with humans at the apex.

At one point in Darwin’s Darkest Hour, the captain of the Beagle objects to Darwin’s theories – insisting that they undermine the stabilizing influence of the Bible and, if ever publicized, would serve as “an axe to the root of the faith that sustains society.” Darwin always insisted, however, that his inquiries into the origin of species – the “mystery of mysteries” – wasn’t about undermining religion. Rather, his point was that the Bible cannot and should not be understood and as a scientific text.

Darwin’s wife Emma also found his theories troubling. Yet she was adamant that he should go public with them. A strong but gentle woman of the Unitarian tradition, Emma at one point shares her conviction that “honest and conscientious doubts can never be a sin.” 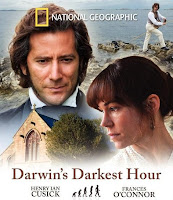 Toward the end of the film, in a scene set shortly after the tragic death of the couple’s infant son, Darwin confides to his wife that the whole subject of God was “too profound for the human intellect.”

The film clearly attempts to provide a very human portrait of the “father of modern biology” – a man dedicated to truth, scientific truth, and whose book, The Origin of Species (1859), undoubtedly changed the world. Darwin’s Darkest Hour is well worth experiencing.

Interestingly, shortly after viewing this film I came across an intriguing article in The Christian Century on “Evolution and Sacrifice: Cooperation as a Scientific Principle” by Sarah Coakley.

I’ll conclude this post with that part of Coakley’s article that I found most insightful, followed by a short video comprised of clips from Darwin’s Darkest Hour.


The fact that cooperation has been identified by biologists as a strategy in evolution indicates that selfishness is not the sole key to success in evolutionary development. Martin A. Novak has identified five precise conditions in which cooperation works (“Five Rules for the Evolution of Cooperation,” Science, December 2006). This strategy works so interestingly across the entire evolutionary spectrums, from bacteria to Homo sapiens, that Novak states that cooperation must be counted a third evolutionary principle alongside the classic Darwinian duo of mutation and selection. Cooperation, Novak analysis shows, can be a kind of contrapuntal accompaniment, without which selection itself would not go on operating as it does: extreme competitiveness dethrones itself.

Darwin had already assented, in The Descent of Man, that factors beyond mere mutation and selection (in the case of hunter-gatherers, some kind of community solidarity) were doing something important to evolutionary processes. But he could not precisely pin down those other factors. Now with the aid of mathematical accounts of evolutionary processes, we can.

It sounds good. I saw something about another recent Darwin movie - Creation.

Thanks so much for the heads-up about Creation. It looks to be a very interesting film and I hope it finds a distributor here in the U.S.

Isn't it funny how films and/or books on the same topic suddenly seem to come out at around the same time! Is it the collective unconsciousness at work?