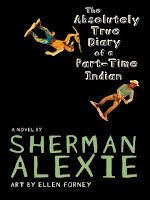 Here’s a great little excerpt from Sherman Alexie’s 2007 book, The Absolutely True Diary of a Part-Time Indian. (With thanks to my friend Eileen for bringing it to my attention.)

[My grandmother] was amazing.

She was the most amazing person in the world.

Do you know the very best thing about my grandmother?

And I know that’s a hilarious thing to say about your grandmother.

And, yeah, my grandmother was smart and kind and had traveled to about 100 different Indian reservations, but that had nothing to do with her greatness.

My grandmother’s greatest gift was tolerance.

Now in the old days, Indians used to be forgiving of any kind of eccentricity. In fact, weird people were often celebrated.

Epileptics were often shamans because people just assumed that God gave seizure–visions to the lucky ones.

Gay people were seen as magical, too.

Gay people could do anything. They were like Swiss Army Knives!

My grandmother had no use for all the gay bashing and homophobia in the world, especially among other Indians.

“Jeez,” she said. “Who cares if a man wants to marry another man? All I want to know is who’s going to pick up all the dirty socks?”

Of course, ever since white people showed up and brought along their Christianity and their fears of eccentricity, Indians have gradually lost all of their tolerance.

Indians can be just as judgmental and hateful as any white person.

But not my grandmother.