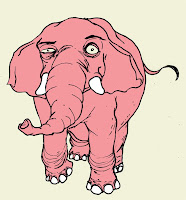 With these two important events in mind, I share today excerpts from a commentary written by Mitchell Gold and published in the October 2 issue of the Washington Blade. Gold’s piece is especially pertinent given my recent

post on the vicious (and frequently fatal) attacks on gay people in Iraq – attacks motivated and fueled by religious fundamentalism.

Religion-based bigotry is a giant pink elephant in the room. It is the cause of incredible harm to millions of people and especially vulnerable adolescents and teens.

To be clear, I am not anti-religion. I am anti-religion based bigotry. . . But moving from New York to North Carolina in the 1980s, I discovered just how pervasive and deep anti-gay sentiment is beyond our urban centers. As I traveled to many areas across our country, it became apparent that the condemning and hateful attitudes and actions could be traced to one source: church teachings.

I spoke to many people who have been victimized by rejection and condemnation. I was burdened most by the young people I had met who had been discarded by their families, churches, communities and lost their own self worth from the onslaught of anti-gay religious language and actions they experienced. I met mothers and fathers who had lost a son or daughter to suicide — young people who believed they’d be better off dead than growing up gay in America.

That burden was more than I could bear and in 2005 I founded Faith in America to educate those who misuse church teaching to justify bigotry, prejudice, discrimination and violence against our community.

. . . It doesn't take a theologian or well-studied religious person to understand a very simple history lesson. When we look at this country's history, we see many examples of church teachings misused to justify looking down upon others. Native Americans. Women. African Americans. Interracial couples. Even various religions that did not conform to certain church teachings.

In every case, these examples of religion-based bigotry and prejudice have been judged by history as immoral and wrong.

We, as the LGBT community, do not have to put ourselves before America as some moral or religious arbiter. History and common sense in the hearts and minds of good, decent Americans serve as that arbiter for us.

To read Mitchell Gold’s commentary in its entirety, click here.


See also the previous Wild Reed posts:
To Be Gay in Iraq . . .
The Blood-Soaked Thread
The Pope’s “Scandalous” Stance on Homosexuality
The Vatican’s Actions at the UN: “Sickening, Depraved, and Shameless”
“What’s a Conscientious Faggot to Do?”

It will likely take centuries, but one day the Christian community will be shamed by its long history of hate-inspired speech and crimes against homosexuals. I look at it this way. It took the Church centuries to acknowledge crimes against Jews et al. Better late than never? It is all very sad.

This is an excellent article but it just makes me feel so sad. I am upset also about what is going on in Maine and Nova Scotia with their bishops. Can't we do better?