Dr. Erik Steele and the "Naked Truth on Same-Sex Marriage" 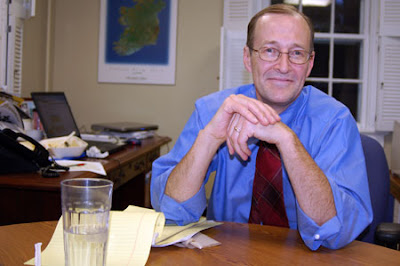 I appreciate the op-ed on same-sex marriage by Dr. Erik Steele that was published in yesterday’s Bangor Daily News (Maine).

The part that gives me most hope reads as follows:

Some opponents [of same-sex marriage] have argued that the right of gays to civil marriage will lead to more support for a gay lifestyle in the education of our children. Forget it; there is no education left to be done. Our teenagers already know about gays and for most of them, this debate about gay rights is so yesterday. They have gay friends, live in a world that exposes them to gay lifestyles, and most of our teenagers think the gay marriage debate is fiddling with a dead issue while the world warms around us and the federal deficit threatens to bury their futures in a sea of debt.

It’s so true, isn’t it? In many parts of the world, gay marriage is simply not an issue for the younger generations, which means, of course, that in time it’s going to be a given; a no-brainer.

Anyway, following is Dr. Steele’s op-ed in its entirety. I think it’s great. Perhaps you will too!

I’ve seen thousands of people naked. I have inspected their insides and outsides, felt their pain and sometimes their souls, and after all that, I can see we all are pretty much the same. That equality in human essence makes it impossible for me to see why gay people are not allowed the right of civil marriage.

We have been told that right would damage the institution of marriage, rock the foundations of the American family and runs contrary to the intentions of our Maker. But the clothing of rationality and God’s word have been used forever to hide the naked truth of racism, sexism and other prejudices. The arguments against the right of gays to civil marriage is no different; if you peel off the clothing, what lies underneath most opposition to civil marriage rights for gays is just naked fear, ignorance and prejudice.

It is the same old stuff we have heard forever. We were told women were too emotional to vote and that giving them equality in the home would ruin the institution of marriage. Equality of women was once thought here to be against God’s order. So was equality for African-Americans and Native Americans, who were too “ignorant” or “savage” to be allowed equal status. Many states banned marriage between whites and blacks for some of the same reasons we still ban gay marriage; bad for marriage, bad for children, bad for our values, yada yada.

In each of those cases, Americans have slowly overcome their baser instincts with their better instincts, gradually eroding institutional and cultural inequality with steady application of our founding principle that all of us must be equal before the law. The fear that marriage will suffer should not stop us from doing the same for gays who want to be legally married.

Marriage does not need protection from gays; it needs protection from the things I see in my office every day that tear half of American marriages apart. Nothing, in my experience, corrodes love and marriage like the grind of existence on the margins of economic survival. Drug and alcohol addiction will ruin more marriages than gays’ access to civil marriage ever will. With notable exceptions such as the Catholic Church, few of those who oppose gay marriage fight as hard against poverty, lack of access to good drug and alcohol treatment programs, or lack of social support for young parents, as they do against the right of gays to civil marriage.

Nor do our children need protection from the concept of gay marriage. Some opponents have argued that the right of gays to civil marriage will lead to more support for a gay lifestyle in the education of our children. Forget it; there is no education left to be done. Our teenagers already know about gays and for most of them, this debate about gay rights is so yesterday. They have gay friends, live in a world that exposes them to gay lifestyles, and most of our teenagers think the gay marriage debate is fiddling with a dead issue while the world warms around us and the federal deficit threatens to bury their futures in a sea of debt.

In the end, though, gay marriage is not about marriage or teenagers, and it is not even about gays as much as it is about us. Over the last 250 years, Americans have slowly chipped away the bias and ignorance used to deprive almost every American except wealthy, white men of equal standing before the law. The right of civil marriage for gays is about continuing that same march toward “one nation, indivisible, with liberty and justice for all.” You cannot oppose it without betraying American values and the rights hard won for you by those victims of prejudice in almost every family tree who fought in their time for the rights we have in ours.

So on Nov. 3, be true to those who fought for the freedom that you now wear to cover you against injustice and vote No on Question 1. Like it or not, rights such as access to civil marriage for gays are as American as apple pie, and so is protecting them.

Erik Steele, D.O., a physician in Bangor, is chief medical officer of Eastern Maine Healthcare Systems and is on the staff of several hospital emergency rooms in the region. He is also the interim CEO at Blue Hill Memorial Hospital.

NOTE: To read comments on this op-ed, click here.


See also the previous Wild Reed posts:
Scandalous News from Maine
The Misplaced Priorities of the Catholic Church in Maine
Maine Becomes Sixth State to Allow Same-Sex Marriage
Love and Justice in the Heartland
The Same Premise
Same-Sex Marriage: Still Very Much on the Archbishop’s Mind
What Straights Can Learn from Gay Marriage
The Same People
Love is Love
The Changing Face of “Traditional Marriage”
The Real Gay Agenda