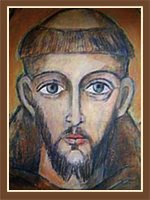 On this feast day of St. Francis of Assisi, I share the following excerpt from a great reflection written by Philip Lowe, Jr.

St. Francis of Assisi who’s feast we celebrate on October 4th is remembered mostly because he gave a face and name to those who were poor in his day. The people he served were those who were marginalized by society and often the church. They were the forgotten, the non-preferred. Yet, St. Francis saw in the poor, someone to be loved, cherished and wanted. St. Francis saw those who were without the necessities of life as people who have names and faces. He saw in the poor and disadvantaged people who needed to know that God had not forgotten them, but had a special place for them. St. Francis reached out and made them someone when others looked on them as a nobody.

Sometimes, amidst our theological and political discussions, we forget who the friends of Jesus were. A careful reading of the Gospels and we will see that the best friends of Jesus were those whom society had left behind as worthless and unwanted. Those who thought they had nothing and no one to believe in or care for them, Jesus had a very special place in his heart for them. “Come to me, all you that are weary and are carrying heavy burdens, and I will give you rest. Take my yoke upon you, and learn from me; for I am gentle and humble in heart, and you will find rest for your souls. For my yoke is easy, and my burden light.” (Matthew 11:28-30). Those who were poor and in need of someone to love and care for them, Jesus offered them a place where they could find rest and hope. When no one else believed in them, Jesus wanted them to learn about him.

Yet to those who thought they had it all together, Jesus said many “Woes” to them. Those who felt that if they just obey the rules, if they just show their greatness through only their deeds and assumed greatness because of their stature in society, Jesus had very stern warnings for them.

At times when I think about this great message of Christ lived out in St. Francis of Assisi, I cannot help but wonder if some of the greatest followers of Jesus forget who the friends of Christ are. We see church groups and political groups pushing those who need their burdens lightened, being given more and more by those who claim to follow Jesus. Religious fundamentalists consistently seek to treat homosexuals and transgendered people as though there is no room in the house of God for them, unless they become straight. Over the past few weeks we have seen politicians take interest in their money and political party over those who are sick and in need of health care. We have seen people who desire to help the poor and those in need of a lift-up out of ground zero looked upon as “Nazis” and “socialists.”

He didn't serve them only- he became one of them. Holy Poverty moves "us" and our "stuff" out of the way to make room for God.

And Happy Feast to you too, Thom!