The Spirit's Transforming Work Continues Within and Through Us 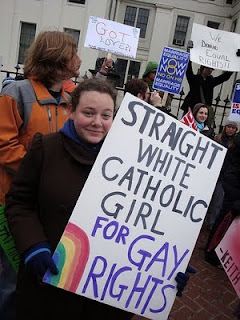 My friend Phillip alerted me to the following letter from “Seething Mom,” recently posted on Pam’s House Blend.

While it’s sad that the mother who penned this particular letter feels compelled to leave the Church for the sake of her own integrity and, no doubt, her spiritual and emotional well-being, many other Catholics are opting to remain and work for reform. We’re encouraged in our efforts by the growing support among Catholics for gay people and their basic rights within both the Church and society. All of which brings to mind fellow gay Catholic blogger Terence Weldon’s observations in response to a recent national survey on public support for same-gender marriage conducted by the Pew Research Center. Writes Terence:

In the Catholic Church, progress is masked by the implacable opposition of the hierarchy, and the vocal opposition of the Catholic loyalists. The Pew survey shows, however, that the bishops and loyalists do not represent the views of ordinary Catholics, many of whom support either civil unions or full marriage rights, and do not see homosexuality per se as a moral issue. 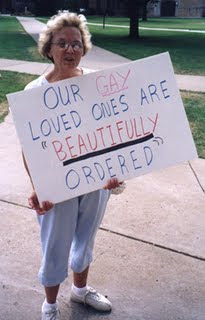 Hmm . . . Why do I get the feeling that the Roman Catholic hierarchy is losing the “battle” around the issue of marriage equality? Probably because lay Catholics are showing themselves to be much more attuned to God’s loving presence in the lives and relationships of LGBT people than are the members of the clerical caste of the Church. Indeed, it seems quite obvious that these members of the clerical caste are more concerned with maintaining a system of authority relative to a bygone era than they are with being open to the Spirit alive and afoot in the world today. As a result, not only are they incapable of speaking with any real clarity and compassion on sexual matters, but they lack genuine authority across the board.

God’s Spirit of Love is transforming our world (and church) through those open to its presence and action. And although this is the way it’s always worked, at this current moment in human development, we’re undoubtedly seeing something wonderful unfolding around issues of sexuality and thus authority. Yes, the circle of awareness, love, and justice is expanding. And whether the hierarchy likes it or not, Catholics are among those embodying this transforming work of the Spirit.

Please stop attacking our lgbt children in the name of a loving God.

Yes, “attacking.” And no, I don’t feel I am using too strong a word. Any time a person or organization sets out with massive amounts of money and resources to strip others of rights that everyone else enjoys, and those “others” are our children, it is pretty hard to see it as anything but an attack. And make no mistake, the damage does not stop with our children, because when you succeed in stripping our children of rights and dignity, you also deeply wound the family and friends that unconditionally love and cherish them.

The other day a conservative Catholic group, CatholicVoteAction.org, demanded that an ad running in Maine depicting a life-long Catholic Mom who supports her gay son and his family be pulled from the air. I can only guess that the ad really hit a nerve because it put human faces on the people who will be so deeply harmed if the Catholic Church succeeds in its campaign to dehumanize the lgbt community. Why else would an organization want to silence this sweet mom who by her own words admits that her Catholic faith means so much to her?

By silencing this mother who chooses to love, support and accept her son and his family, the Church is forcing not just this mother, but every Catholic who has a gay loved one to make a choice: remain silent when their Church attacks their gay children or get out.

I give this Catholic mother from Maine a lot of credit. She had the courage to face up to the Church she has known and loved her entire life. I, on the other hand, have decided that I cannot walk through the doors of an institution that has hurt me and my family so deeply. And I know I am not alone.

That letter is so sad. But I think the mom needs to stay in the Church as we need people like her. People shouldn't let themselves be driven out of the Church by the haters. It is heartwarming how the woman in the Maine ad support her son, his partner and her grandchild. How much healthier they are than Bishop Lahey of Nova Scotia. The Church in Canada seemed to have some trouble finding someone to take him in. Perhaps they should send Bishop Lahey to Maine to help the Bishop there in his crusade.

While some may see the Catholic mom's departure from Catholicism over the gay question as "sad", I see her departure as liberating. I believe she will see it that way too.

As a mom of a GLBT person, it feels just fine to have high-tailed it from this religion, with its endless morass of conversations about my child's moral worth or the lack of it. The institution itself lacks moral meaning on this question (and others) in today's world. Walk out and Presto!- all the seething is gone. No quarrel with those who fight on. Just glad not to be one of them.