I value dialogue, to be sure. But I must admit that there are times when I feel that it is simply not possible. For instance, how can one dialogue with those who refuse to even entertain the possibility of change, of evolution in their own or others’ thinking?


Make no mistake, people develop in awareness, or consciousness. And although different theories of this development abound (see graphic below), the stages of it are nevertheless remarkably similar across cultures. 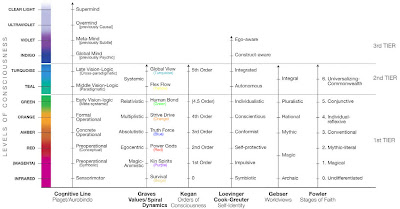 Click on the image above for a larger view.
These stages are profoundly human, part of God’s loving and mysterious call to awaken and transform us. Yet like any process of human development, people are at different points when it comes to consciousness evolution and thus moral and spiritual development.

I’ve come to realize that it is very difficult, often impossible, for two people positioned at different ends of any process (e.g., Stage 1 and Stage 4 of the Kohlberg-adapted “Path of Ethical Consciousness,” at right) to engage in meaningful dialogue. I think it’s a bit like a scientist in the field of astronomy attempting to dialogue with a flat earth theorist. That’s how I often feel when attempting to engage with those who unquestionably support and promulgate the Church’s teaching on homosexuality.

I was reminded of all of this by Colleen Kochivar-Baker who highlights today on her blog a response by Peter Martial to a commentary by the editors of America magazine. This particular commentary decries the polarization within the Roman Catholic Church. It notes, for instance, that:

This polarization must stop; otherwise our identity as a faith community will be torn asunder and Catholicism will cease to be an elevating force for change. How can we decrease the polarization? A vital first step is to seek out our common ground in the major civic areas where almost all Catholics agree: religious liberty; the sacredness of all human life; the goal of reducing and eventually eliminating abortion; support for social programs that provide a safety net for the poor; the elimination of segregation, racism and discrimination; and respect for differing religious and social traditions and diverse cultures. Few are the Catholics who do not share these principles, which provide a ready-made common ground.

We also need to find a way to foster civil debate and dialogue on how to incorporate and share our values in a pluralistic society. Recognizing the distinction between moral principles and their application, we can disagree in good conscience on the way such principles are prudentially applied in the public sphere. Even when disagreeing over the concrete applications of moral principles, we also must respect the good will of those with whom we disagree. Tolerance, charity and respect are not “weasel words,” nor are they excuses to paper over legitimate differences among Catholics. Rather, they are essential elements for a church in which members work together toward common goals, by supposing, as St. Ignatius wrote, that everyone is striving to act for the greater good.

Along with Colleen Kochivar-Baker and no doubt many others, I resonate with and appreciate the response to this commentary by Peter Martial, reprinted in its entirety below.

Dear editors, your editorial was eminently reasonable, very middle of the road, very Rodney King, i.e., “Can’t we all get along?” But, by God’s design, human consciousness evolution doesn’t work that way. It works by a death to the old worldview and a rebirth to the next (which always presents its own new challenges).

As Jesus said, “I am the sword who comes to divide.” In the last 50 years, scholars of human consciousness evolution have identified three levels of mental development, three major shifts in human consciousness which, trans-culturally, always occur in the same order – fundamentalism, rationalism, and multicultural pluralism. Your editorial was at the rational level.

As the above comments show, you may tolerate fundamentalism, the level below, but its adherents will not tolerate you for they are convinced they have the truth and, to betray what they think is truth, is to betray God and risk eternal damnation. No amount of reasoning, editorial or otherwise, will convince them absent an inner spiritual death and rebirth. As Jesus said, “ears to hear and they just can’t hear.” For them your editorial falls upon deaf ears.

For those who have evolved beyond rationalism, however, your editorial is not sufficiently nuanced. You talk about spiritual principles vs. how such are applied, a very rational distinction. But as one commenter asks, what does that mean with respect to women priests? Is that a principle or a practice? Same applies to gay marriage. Postmodern pluralistic multiculturalism has shown that much that was assumed to be rational or even natural law has been nothing other then the idolization of cultural prejudices as supposedly “God ordained.”

I do agree that all of the people at all of the above described levels are honorable and honest and well meaning. Unfortunately, however, we will never “get along” anymore than Jesus did with his religious opponents, the Pharisees and Sadduccees.

Finally, you seemed concerned with “Catholic identity” in a sectarian sense when “catholic” by definition refers to universal truth. You also seem concerned with the Church as an agent of change, which seems a silly hope since the Church, by and large, has been a reactionary force for at least 500 years.

The Church exists to create saints, people who consciously realize unity with God, a level of consciousness far above the mental levels described above. The rest, in the bigger scheme of things, is nonsense.


See also the previous Wild Reed posts:
Keeping the Spark Alive: Conversing with “Modern Mystic” Chuck Lofy
Why the Bishops Are Being Ignored
It’s Time We Evolved Beyond Theological Imperialism
Thoughts on Relativism
The Holarchical Church: Not a Pyramid But a Web of Relationships
An Australian Bishop’s “Radical” Call for Reform
From Rome to Minneapolis, Dialogue is What’s Needed
Dialoguing with the Archbishop on Natural Law
No Place for Dialogue in Archdiocesan Newspaper
Canceling Out Dialogue
Pan’s Labyrinth: Critiquing the Cult of Unquestioning Obedience
The Sufi Way
Posted by Michael J. Bayly at 2:09 PM

I would suggest a nuance: there are times when dialogue is not opportune.

And I think it's very important to avoid a mindset that dialogue is not possible because [We are/I am] are so evolved and [They are/She is] so not evolved. That kind of thinking tends to obscure the more common pattern that, to the extent people do evolve in consciousness, it's not even across their assumptions/values/beliefs but rather uneven. Thus, people often tend to combine divided levels of consciousness within themselves. And that is important to realize, because it helps explain why dialogue can be difficult: a sense of internal inconsistency (not just logical, but experiential and otherwise) can be a powerful saboteur of dialogue.

When I encounter someone with whom dialogue is inopportune, I do try to do a couple of things:

1. Be present to them to the extent I believe I am called to be so; and
2. Try to see my commonality with the thing(s) in them that drive me batty - because, as people in the world of coaching say, whatever you cannot stand to be with will run your life.

Your points are valuable and well taken. Thanks for sharing them.