Yesterday in the Chicago Sun-Times, Carol Marin (pictured at right) reflected upon next month’s meeting between Pope Benedict and President Obama, and revisited the value placed on dialogue by the late Cardinal Joseph Bernardin. Marin’s insightful op-ed is reprinted in its entirety below.

“The Vatican has been seeking common ground with Obama, although some American Catholic bishops have been hostile to his administration,” the Associated Press reports.

Let’s pray that the spirit of the late Cardinal Joseph Bernardin fills the room and that Cardinal Bernard Law, now assigned to Rome, is nowhere in sight.

Bernardin [pictured at right] and Obama, despite a deep difference on abortion, shared much: Chicago. A commitment to dialogue. And a belief that common ground can be found even across the most fractured fault lines of faith and belief.

And what happened to Bernardin in the months before his death illuminates the land mines ahead – both inside and outside the Catholic Church.

In the summer of 1996, three months before pancreatic cancer claimed him, Bernardin quietly sent a document to his fellow bishops for review. He told them that in two weeks he would hold a news conference on its contents. But first he asked them to weigh in.

The document, “Called To Be Catholic: Church in a Time of Peril,” was the first official call for discussion among Catholics on polarizing issues including the role of women, human sexuality and abortion. And war, capital punishment and racial injustice. 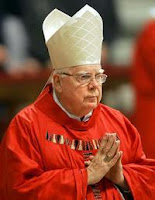 Though a few colleagues such as Cardinal Roger Mahony of Los Angeles lent their support, “Most bishops sat on their hands,” recalled Monsignor Ken Velo, one of Bernardin’s closest friends. “Law [pictured at left] did not say anything at all.”

Then, on Aug. 13, the day Bernardin took his report public, Law sent out his own news release to denounce it. He called it “unfortunate” and said there could be no dialogue if it contested the truth of church teachings.

Velo was blunt. He told Law that Bernardin “had a difficult time” with what Law had done. And he conveyed the dying cardinal’s disappointed words. Bernardin, referring to Law by his first name said, “I would never have done this to Bernie.”

Law, according to Velo, denied he had done anything hurtful. But we now know Law is well-practiced in the art of denial.

A pedophile scandal engulfed his diocese and the nation, forced his resignation in 2002 and sent him into exile in Rome. Amazingly, Law remains a prince of the church – and lives like one.

At Bernardin’s funeral in the winter of 1996, Law was the senior bishop on the altar, but it was Mahony whom Bernardin designated to say his mass, and Velo whom he asked to give his homily.

“There was a righteous anger in me,” acknowledged Velo. And there was anger among those in the pews that day, who burst into applause when Velo, from the pulpit, said of Bernardin: “He took initiatives. He had a hard time with people who directed lives by using rearview mirrors. He wanted people to come around the table and see, not what divides us, but what brings us together. He wanted to make common ground, holy ground.”

From the political wars in Springfield, Illinois, to the battlefields of Iraq to the bloody streets of Iran, the cry for common ground dreams out at us.

If Darcy had shown up, he and Obama could have talked. Not agreed, but opened a dialogue. The way the pope and the president will in July.

The way Cardinal Bernardin on the eve of his death believed all of us must to survive.

See also the previous Wild Reed posts:
Dialogue is Key in Moving Beyond Theological Impasses
The Call to Be Dialogical Catholics
From Rome to Minneapolis, Dialogue is What’s Needed
Dialoguing with the Archbishop on Natural Law
No Place for Dialogue in Archdiocesan Newspaper
Canceling Out Dialogue
Is Dialogue Always Possible?
A Time to Re-Think the Basis and Repair the Damage

Not to be ignored is that Bernardin in Chicago confronted the clergy pedophile crisis several years before it became a "national" crisis. His policies, in my view, were much more humane and just than the current ones while still being careful about the welfare of minors. More to the point, Bernardin passed the Chicago policies around to the U.S. bishops at their annual meeting. Although many copied them exactly in their respective dioceses, prelates like Law scorned them. They thought they had the problem in hand. What a shame and a joke!