Putting a Human Face on the 'T' of 'GLBT' 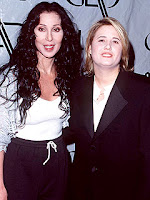 The issue of transgenderism has been in the news recently after it was announced that political and social activist Chastity Bono – the only child of entertainers Cher and the late Sonny Bono – began undergoing a sex change shortly after her 40th birthday on March 4.

In light of this, I’m sharing today an article from the fall 2003 issue of the Rainbow Spirit, the journal of the Catholic Pastoral Committee on Sexual Minorities (CPCSM).

I’d also like to draw your attention to a very informative piece over at the Progressive Catholic Voice by Jacqueline White that highlights the Church’s view on transgenderism. Jacqueline’s article can be viewed here, while below is CPCSM co-founder David McCaffrey’s September 2003 article on a CPCSM-sponsored presentation by transgender educator Debra Davis.

Putting a Human Face on
the “T” of “GLBT” 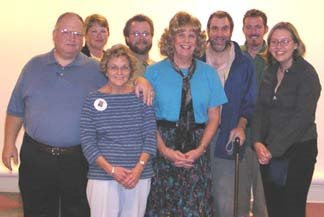 Debra Davis (center, in blue blouse) is flanked by CPCSM
board members and supporters and by parish staff, after her
presentation on transgenderism at St. Thomas the Apostle.

On September 15th, before an audience of about 50 people, Debra Davis, a transgender person and the executive director of the Gender Education Center, in Maple Grove, MN, made history for CPCSM, as she successfully kicked off the Fall Speakers’ Series, Introducing the Catholic Community to the ‘B’ and the ‘T’ of 'GLBT' and Presenting the ‘I’: Bisexuality, Transgenderism, and Intersexuality.

However, the real historical event went far beyond her simply being the first speaker of the series. In the 23 years since its founding, CPCSM has consistently written and spoken out about the needs and special gifts of all “GLBT” persons and advocated for their human rights, both among Church leaders and among local and state legislators. However, it was not until Ms. Davis’ presentation that CPCSM first formally sponsored and hosted an educational event that focused on the special needs and gifts of sexual minorities other than lesbians and gay men.

History-making is no stranger to Debra Davis. In the spring of 1998, while working as a media specialist at Southwest High School in the Minneapolis Public Schools, she also became the first educator in the state – and possibly in the nation – working with young people in secondary education to come out as a transgender person and to continue working in the same school. At the age of 51, having taught at Southwest for 28 years and having been married with two children and two grandchildren, she literally left school one Friday as David and returned on the following Monday as the woman, Debra Davis.

Although she created a milestone in CPCSM’s history, Debra continued the CPCSM tradition of beginning her presentation by first sharing with the audience her personal journey – as she recounted her transition, as a transgender person, from David to Debra. She also provided invaluable information about the nature of transgenderism and the other important aspects of human sexuality that go beyond sexual orientation.

Debra revealed that, by coincidence, her visit to St. Thomas the Apostle was a bit of a homecoming for her. Having grown up in the local Linden Hills neighborhood, she recalled that – then as a child named David – she had helped her Uncle Omar with his snow removal business, frequently rising at 3:00 am to shovel snow around the St. Thomas church building on Sunday mornings before the Masses would begin. Debra also had graduated from nearby Southwest High prior to spending 32 years of her life there as a teacher.

Ms. Davis presented a number of clarifying definitions and important concepts as she informed the audience about what it means to be a transgender, or “differently gendered” person. She defined the word “transgender” as “a broad term used to encompass all manifestations of crossing gender barriers, including all who crossdress or otherwise transgress gender norms, and all other who wish to belong.”

Debra also indicated that transgenderism has been legally defined. For example, Minnesota, one of only three states to currently protect transgender persons by legislation, defines transgender people in its 1993 Minnesota Human Rights Act as “having or being perceived as having a self-image or identity not traditionally associated with one’s biological maleness or femaleness.”

One of concepts that Ms. Davis shared that was especially enlightening was the fact that sexual orientation represents only one of the continua that comprise human sexuality. She then went on to show the audience three other scales besides Kinsey’s Sexual Orientation Scale (who you are romantically/sexually attracted to, from heterosexual to bisexual to gay/lesbian): the Genetic Sex Scale (your biological sex: XX-female or XY-male chromosomes and other body parts, from male to female); the Gender Scale (who you perceive yourself to be along the continuum from man to woman); and the Presentation/Social Role Scale (how you present yourself to others, the social role you assume from masculine to feminine).

The last portion of the presentation was devoted to a dialogue between Debra and the audience. Debra welcomed personal questions and responded clearly and honestly to the questions she received. She retained her poise and composure even during some confrontational questioning and lecturing from a small group of conservative Catholics. She clearly represented a good role model of a transgender person as well as a competent resource person. Even more importantly, though, Debra presented herself as a role model for what it means to be a good human being.

Throughout her talk, Debra sent the message that regardless of where we find ourselves on the four scales of human sexuality - regardless of how we dress, regardless of whom we love, and regardless of the pronouns that are used to describe us - we are all human beings who share the same needs, the same rights, and the same responsibilities to be contributing members of society. For all those in attendance, as well as for CPCSM leadership, Debra truly put a human face on the “T” of “GLBT.”