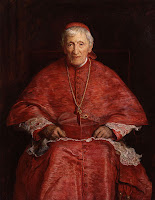 D. Stephen Heersink (aka The Gay Species) has recently posted on his blog an interesting commentary on the life and legacy of John Henry Cardinal Newman, “the 19th century’s most famous and infamous theologian.” Following is an excerpt.

[Newman’s] two most influential writings are among his longest and his shortest. The longest is his Essay on the Development of Christian Doctrine, which tries – and fails – to justify the Vincentian Canon of the fifth century as the prism of catholicism, or universalism. The canon states that catholicity is that “which is always, everywhere, and by everyone believed.” When pressed, few doctrines fit the bill. But Newman knew he had a problem, especially with Papal Supremacy and Infallibility as well as the Immaculate Conception, both made dogma in the First Vatican Council and the 19th century.

But his true tour d’ force was On Consulting the Faithful in Matters of Doctrine, a treatise of less than 30 pp. Consulting the Faithful and Development of Christian Doctrine are like two bookends that sandwich a modern “development” and “evolution” of more sophisticated, nuanced, and subtle doctrines from the more primitive. Newman was happy to explain certain doctrines not in the Bible, and even not in early Church history, because our development and understanding has grown through the Holy Spirit, which allows a perspective not otherwise known to primitive Christians. But he could not explain how Petrine primacy became Petrine supremacy, much less papal infallibility; nor could he stomach the Immaculate Conception any less than Thomas Aquinas, who found the rumblings of such nonsense in the 13th century INCOMPATIBLE with precedent and antecedents.

Poor John. He had several androphile lovers as an Anglican priest, but his switch to Rome left him feeling like an eunuch. [Newman had gay lovers as an Anglican priest!? That’s quite a charge. I wish Heersink had backed it up with documentation.*] He was awarded a cardinal’s hat for converting and the Pope’s wrath for not submitting to papal supremacy and infallibility. Newman died an unhappy, unfulfilled man. His constant appeals to Christian charity, faith, and hope, left him without any benefactors, without a faith he could fully support, and nearly despondent that he was “caught” between a rock and a hard place. In today’s age, both John Paul II and Benedict XVI have no interest or tolerance for a “gay man’s” insights on the Oxford campus. He died estranged and with a broken heart, but at least his cardinal regalia was red, as he is no longer read.


* Here’s what Wikipedia has to offer on Newman’s relational life:

From the age of 15, he was convinced that it was the will of God that he should lead a single life. In Oxford he taught that celibacy was a high state of life, to which most people are unable to aspire. His deepest emotional relationships were with younger men who were his disciples. The most significant of these were Richard Hurrell Froude, who died in 1836, and Ambrose St John who lived with Newman from 1843 for 32 years. Ambrose St John preceded Newman into the Roman Catholic Church and became a member of the Birmingham Oratory, where he lived until his death in 1875.

Newman was profoundly affected by the loss of these friends, and wrote after the death of Ambrose St John in 1875: “I have ever thought no bereavement was equal to that of a husband’s or a wife’s, but I feel it difficult to believe that any can be greater, or any one’s sorrow greater, than mine.”

At his own request, Newman was buried in the same grave as Ambrose St John. He had stated on three occasions his desire to be buried with his friend, including shortly before his death in 1890: “I wish, with all my heart, to be buried in Fr Ambrose St John’s grave - and I give this as my last, my imperative will,” he wrote, later adding: “This I confirm and insist on.”

NOTE: Wikipedia’s discussion on the differences between Newman and Cardinal Manning (“the two great figures of the late nineteenth century Roman Catholic Church in England”) is also worth investigating.

Newman continues to astound and delight me! Although I do happen to find the Immaculate Concpetion quite logal in the big scheme of things I certainly understand and sympathize with his misgivings concerning Papal infallility and Petrine "supremacy" rather than "primacy." And the fact that he was probably gay makes me like him even more!

Hopefully, once Ven. John Henry Newman has been gift with the title of "Bl." and recognized as an individual who enjoys the bliss of heaven perhaps his theories and ideas about the development of certain doctines could influence the Church's views regarding homosexuality for the better. It's a nice thought!